Established in 1933 during the Great Depression, Helen Corning Warden, a prominent member of Philadelphia society, recognized the need for a school where talented Amerian singers could receive the highest quality operatic training they needed to master their art. Until the schoolís establishment, American singers typically turned to European training, where well renowned voice teachers and coaches were easily accessible. But such training was long and costly, especially during Americaís troubled economic times. With the encouragement of voice teacher Edgar Milton Cooke, Mrs. Warden and her friends established ìThe School for Vocal Scholarships,î a school that would provide tuition-free education.

The Helen Corning Warden Theater at The Academy of Vocal Arts 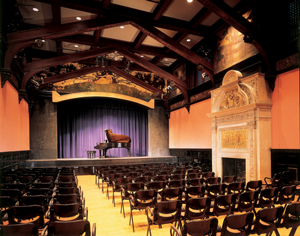 AVA continues to provide tuition-free vocal and opera training of the highest quality, and financial support during training, to exceptionally talented and committed young singers who have the potential for international stature, and to present them in professional performances that are accessible to a wide community. Resident artists receive intensive training in voice, acting, stage combat, repertoire, languages, (Italian, French, German, ESL as well as diction in Spanish and Russian.) and other related subjects necessary for an operatic career. In recent years, AVA has presented four to five operas, as well as concerts and recitals. Some operas are presented with full orchestra, sets and costumes. Others are concert form with and without orchestra, and some are staged, with piano accompaniment. All are performed in the original language with English supertitles.

Gifted singers come from throughout the world to seek the exceptional training that The Academy of Vocal Arts offers. AVA is unique, not only because it is a fully tuition-free institution that focuses solely on operatic training, but also because it has established a niche as an organization that produces opera, thus integrating both professional and educational components. Admission into AVAís four-year program is highly competitive. AVA receives over 200 applications each year and accepts eight to ten singers on average. The total student population numbers between twenty-seven and thirty. Those who are accepted are immersed in an intensive performance program led by some of the most dedicated and inspired teachers and creative artists in the world of opera today.

Eric T. Dubin as Rigoletto, James Valenti as the Duke of Mantua (Rigoletto, May, 2006) 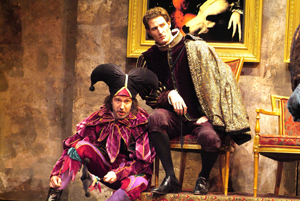