Even in Handelís own time, Orlando wasnít a hit. Three years ago the Royal Opera House mounted a big budget production of Orlando. Despite the big name singers, the elaborate revolving scenery and the Orchestra of the Age of Enlightenment, it was not an artistic triumph. What chance is there then for the tiny Independent Opera Company? This is a fledgling organisation, run on a shoestring. Orlando is only their second production. It would be totally unfair to expect them to pull off a miracle which has eluded so many, up to and including the Royal Opera House.
The real problem with this opera is that modern audiences find it hard to sit through three hours of repetitive recitative, and a plot that defies logic. What impressed me is how the company turned the difficulties facing them around. In the process, they thought the opera through. They approach the opera on Handelís own terms. Alessandro Talevi, the Artistic Director, has enough faith in the merit of the opera that he can dispense with fancy props and let its inherent ideas shine through.
The whole point of Orlando is ìtriumph over adversityî. Orlando was a hero in the past but is now beset by problems he canít comprehend. The opera begins with the usual conventions of love and false love, but from that point everything unravels. Misunderstandings and mishaps pile up relentlessly. This production takes the very deviousness of the plot as a starting point : its focus is the anarchy of fate, not the solution. Suddenly, Handel seems surprisingly relevant to our times.
The seats in the cramped Lilian Baylis Theatre rise steeply upwards, barely a yard from the platform edge, and the stage itself is impossibly narrow. To increase performing space, a tilted ellipse was built on the main platform, with a pit in the middle. Obviously, it would have seemed less claustrophobic in a more spacious theatre, but the ellipse had practical benefits. It created a four dimensional effect with an illusion of foreground and background. Moreover the hollow gave the cast cover so they could disappear, move and pop up again at will. It also meant that the orchestra, (conducted by Gary Cooper), could be accommodated literally in the heart of the action. Seeing them as well as hearing them enhanced the sense of ìcircles within circlesî.
Ultimately, what made this production was its thoughtful understanding of the dynamics of character. William Towersí dark timbres portray Orlando as an action man more prone to mindless violence than to thinking, but by Act Two, he convincingly turns the violence inwards. Even the ties that bind his costume unravel as he descends into madness. Tower has natural stage presence and has sung Medoro and Farnace at Covent Garden. 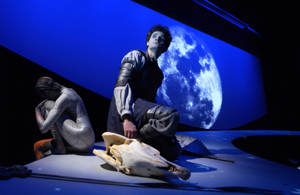 Rebecca Ryanís extensive experience showed in the aplomb with which she created the demanding role of Angelika. Joana Seara, a recent Guildhall graduate, was a charming Dorinda, tending her garden and pet nightingale. Christopher Ainslie was a golden Medoro vocally and visually. Nicolas Wardenís Zoroastro had authoritative presence. In this spare, minimalist production, lighting propels the narrative where scenery might do so otherwise. Shadow puppets and silhouettes make much more mysterious monsters. Zoroastro gets some wonderful moments, such as when he raises his hand and the lighting creates a pattern of words, rising up to fill the stage in synch with his arms. When he calls on the heavens, suddenly the stage is lit up by a projection of the earth seen from space. Itís a cosmic moment, with timeless, magical resonance.
It is imaginative details like this which show that thereís genuine talent in small companies like Independent Opera. Thereís no way they can, or should be expected to perform at the level of major houses. Nonetheless, they should be nurtured, supported and cherished. Channel their enthusiasm wisely, and it could benefit all opera in the long term.
Anne Ozorio