It promised many of McVicar’s trademarks — stark colour, gothic imagery and
theatricality.

But despite an emphasis on history and myth, this modern-dress staging of Handel’s tale of
politico-sexual manipulation was very much a study of the relationship between women and
power in our own time. Between them, Agrippina and Poppea have half of Rome in love with
them, and they exploit it with equal deviousness — and yet their relationship with one another is
one of superficial friendliness and glacial suspicion. 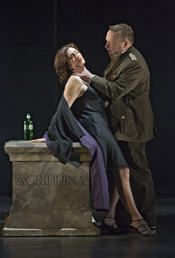 In the title role — a strange one, given that the supporting characters seem to be given most of
the best arias — Sarah Connolly’s reliably impeccable musicianship did not disappoint. Her stage
presence was a revelation; used to being cast as men, Connolly projected a regal femininity
which was complemented to best effect by John McFarlane’s glamorous costume designs. She
was partnered by the marvelous Christine Rice as the feckless teenage Nerone, the son who is
destined for the Imperial throne. Rice’s voice and repertoire have expanded hugely in recent
years and I am pleased to note that her grasp of quickfire Handelian coloratura is even more
astonishing now than it was when she sang Bradamante in McVicar’s staging of Alcina seven
years ago.

The other shining light in this production was the rising star Lucy Crowe, a relatively late
addition to the cast as Poppea, who combined absolute vocal security and assurance with an
alluring presence and fine comic timing, especially in the staging’s best judged and most
memorable set-piece in which Crowe was joined onstage by harpsichordist Stephen Higgins for a
virtuoso “piano-bar” performance.

Making his company début as Ottone, the young countertenor Reno Troilus grew in vocal
security and confidence as the performance went on; he gave a touching vocal portrayal of the
wronged man’s bewilderment in his aria at the close of the first act. The “character” roles of
Pallante and Narciso (Agrippina’s suitors and political pawns) were ably assumed by bass Henry
Waddington and countertenor Stephen Wallace.

Despite a few moments of musical untidiness, Daniel Reuss’s conducting was for the most part
buoyant and well-balanced.

Unfortunately the concept of the sex, drugs and rock ’n’ roll opera production is now something
of a cliché. Despite the considerable comic gifts of McVicar and his cast, the staging exhibited a
pervading hint of crassness which I hope is not a sign of things to come for this popular director.
Four-letter words littered Amanda Holden’s translation. Much advantage was taken of Crowe’s
physique du role; Poppea stripped down to sexy lingerie twice in the space of two scenes, in spite
of only one of the occasions making any dramatic sense. Poppea understandably rolled in drunk
after her traumatic split from Ottone, but what was the point of Agrippina turning up similarly
inebriated a couple of scenes earlier? The opera is all about the relationship between sex and
power, but it all seemed a little overdone. Another worrying thing, and surely not the fault of
McVicar or the near-perfect cast, was the plentiful supply of empty seats on this opening night of
what is surely ENO’s most important new production of the current season.