In the week
after the horrific crime at Virginia Tech, the question strengthened this great but harsh
masterpiece’s claim on the attention of an opera-going public still hesitant to expose itself to the
work, over 80 years past its premiere. San Diego Opera General Director Ian Campbell’s greeting
to his company’s patrons in the program almost begged for their indulgence: Wozzeck “is ‘not’
Aida or Madama Butterfly,” he helpfully explained, but a work that “took opera in new
directions.”

During the performance Sunday, a few audience members took the “old” direction toward the
exits during the scene changes, creeping out as Wozzeck, apparently, creeped them out. The
majority stayed to extend warm appreciation to the hard-working cast at the opera’s conclusion
— a rather abrupt one, with the last note from the orchestra beating the curtain down, a true
rarity. 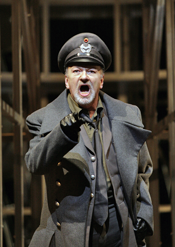 Campbell turned to a theater director new to opera, as the news-making Peter Gelb of the
Metropolitan Opera has done. San Diego has been the home base for Des McAnuff, who has
helmed Tony-award winning musicals from Big River in 1985 to Jersey Boys in 2006. With
scenic designer Robert Brill, McAnuff created an eerie, tense Wozzeck, without the slightest hint
of any showbiz glitter. The cast, in Catherine Zuber’s time-appropriate costumes, live in a cold,
clinical world: the uni-set most resembles a hospital amphitheater for clinical examinations, with
metallic scaffolding forming tiers on the outside, and a huge, tilting disc of lights hanging over
the empty center. Unfortunately, the designers decided this should be a revolving set, and the
turntable apparatus made an unacceptable amount of noise, especially in the scene where Chris
Merritt’s Captain noted how quiet the evening was.

The “examination room” concept makes sense as a metaphor for the work’s detailed analysis of
Wozzeck’s breakdown, but it also serves to distance the audience from the poor soldier’s plight.
If everyone is living in the same cruel confines, why is he the only one who descends into
madness? In the interludes between scene changes, film (designed by Dustin O’Neill) filled the
stage-covering scrim. Some of the images brushed up against cliche, such as time-elapsed shots
of dark clouds streaming through a gray sky. For the most part, the dead-eyed visage of Franz
Hawlata’s Wozzeck stared out. His unchanging expression — or lack of same — served to
work against a sense of increasing anxiety to approaching doom.

So with this, his first attempt at an opera, McAnuff may have felt hesitant to bring the full-force
of his skills to the production. His direction, while detailed and well-structured, provided no
fresh perspectives. Merritt’s Captain screamed and strutted like a borderline psychotic himself.
Dean Peterson’s doctor, on the other hand, seemed a pallid figure, offering tame diet advice after
a perfunctory prostate examination. Jay Hunter Morris’s Drum Major did capture both the
masculine appeal and brutality of his character. 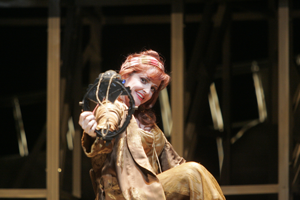 As Marie, Nina Warren truly cut a pathetic figure of desperation, both in the face of her own lust
and her partner’s advancing paranoia. Her top rang out with a cutting edge that made your
reviewer interested in hearing her Salome, or even Elektra.

At the center stood the forlorn figure of Franz Hawlata, pale and haunted, the lower range of his
voice seeming to echo in the emptiness of the character. Wozzeck’s demise, however, came with
the production’s arguable misfire, with Hawlata, instead of descending into water, having to strap
himself onto a disc that mirrored the lights above. The disc then rose and tilted as a scrim
descended, with film of a watery surface projected on it. The theatrical effect deadened the
dramatic intention.

By far the greatest strength of the performance came from the orchestra under the leadership of
Karen Keltner. Last heard by your reviewer leading the musicians in the very different score of
Bizet’s Pearlfishers (!), Ms. Keltner caught the grinding dissonance and also the many moments
of spectral beauty in Berg’s score.

Though by no means a “missed opportunity,” after this only intermittently successful Wozzeck
McAnuff, if he continues to direct opera, should be confident enough to bring more daring and
personal insight into his work. In the meantime, almost as a reward for their attendance at this
still-challenging work, the SDO patrons can look forward to Mozart’s Nozze di Figaro, closing
the 2007 season with familiar melodies and a starry cast. And perhaps after Wozzeck, the pain
underneath the laughter in Da Ponte’s libretto will seep through.