And
behind that wish is the tremendous impression that Kelly Kaduce, who sings the title role in
Miami, has made on him.

“She’s such a great artist — a wonderful singer and a superb actress,” says Gierlach, whose
signature roles include Mozart’s Figaro and Giovanni. “I wish that Tolstoi had come up with a an
ending that would have let Anna and Vronsky work things out and stay together.” He feels that
Kaduce, who will repeat the role when this co-production is on stage at the Opera Theatre of St.
Louis this summer, makes a particularly strong and sympathetic figure of Anna — despite the
events that lead to her tragic death. “As Kelly sings her, Anna is still the winner,” Gierlach says.
“She makes clear that she is a woman of courage. “Anna wanted to be free and independent and
she was willing to fight society in her desire to find love. She refused to accept the limits placed
on her.”

Gierlach describes Kaduce as “an inspiring artist” and states that working with her on this
premiere has been a fine experience. “I’m so happy to have been a part of this,” he says. 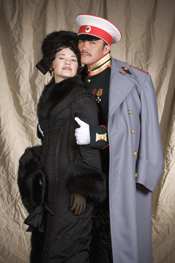 Less than a decade after winning the 1999 Metropolitan Opera auditions Kaduce has made an
unusually strong mark in the world of music theater and has brought distinction to a number of
world premieres. Most recently she sang Rosashorn in Ricky Ian Gordon’s “The Grapes of
Wrath” at Minnesota Opera, where she made this spoiled young member of John Steinbeck’s
Joad family wonderfully credible and gripping. Indeed, she made Rosashorn a major center of
attention in the four-hour work, tracing her development from selfish innocence to the insights
that come with her pregnancy and the desertion of her husband with heart-rending conviction.
(“Rosashorn” is, of course, a corruption of the biblical “Rose of Sharon.”)

In Detroit Kaduce created the role of Caroline Gaines in Richard Danielpour’s “Margaret
Garner,” a role she repeated with the Opera Company of Philadelphia. And in St. Louis she sang
in title role in the American premiere of Michael Berkeley’s “Jane Eyre” and later this summer
she appears at the Santa Fe Opera as Princess Lan in the world premiere of Tan Dun’s “Tea: A
Mirror of Soul.” Her 2003 Santa Fe debut was also in a world premiere: Bright Sheng’s
“Madame Moa,” in which she sang two roles — the Chinese Actress and ZhiZhen. And
although the 2006 Florida staging celebrated the 50th anniversary of Carlyle Floyd’s “Susannah,”
Karduce brought new depth to the title role at Orlando Opera.

It’s quite a track record for a woman who grew up in a Minnesota town of 1500, where opera was
at most something on the radio. “I had no idea that you could make a living as a singer,” Kaduce
said in an interview during rehearsals in Miami. “I enjoy the forests and the out-of-doors and I
spent my first two years at St. Olaf as a biology major.” At that point someone heard her sing and
suggested a change of majors.

“I had always sung,” says Kaduce, pointing out that her mother played the piano and served as a
church organist. “I grew up listening to the top 40 and singing musical theater. “But when I
started to sing classical repertoire, I discovered this incredible music I knew nothing about, music
much more suited to my voice.” Kaduce only on-stage experience before leaving Minnesota for
Boston University was a college “Bohème,” in which she sang not Mimi but Musetta.

More crucial was a performance of “Pelléas et Mélisande” by Minnesota Opera that she had seen
in her sophomore year. “That’s when I fell in love with opera,” she says. “It was clear to me then
that this was the profession for me. The performance further brought out Kaduce’s affinity for
French opera, soon confirmed by her first appearances in “Faust” and “Thaïs,” which she sang
while studying with Penelope Bitzas in the Opera Institute at Boston University.

Butterfly and Mimi followed, and critics crowned Kaduce with laurels for both roles. “Kelly
Kaduce’s Madama Butterfly is nothing short of breathtaking,” a Boston critic wrote of her debut
as Puccini’s gentle Japanese bride. “Some Madamas are heart-warming, others are heart-rending,
and Kaduce’s is the best of both.” And about her portrayal of Cio-Cio San’s death another
reviewer wrote: “With Kaduce, Butterfly’s suicide was not the cowardly capitulation of a hapless
victim, but the act of someone who every step of the way has looked fate straight in the eye with
dignity and acceptance.”

Karduce has no particular explanation for her success in new opera beyond the fact that at the
outset of her career she “didn’t want to say ‘no’” when offered a role. “But even in college I was
fascinated by new works,” she says, “and once I was involved in a premiere I enjoyed the
challenge.” She speaks of Anna, for example, as “a blank canvas,” and it’s up to her to fill it with
life. “I read the novel again and studied the background and history of it,” she says, “and then I
put all that aside and turned to the libretto. “It’s exciting that in a new work I’m largely on my
own — there are no recordings to listen to and no videos to watch.” Kaduce relishes getting
down to work with the composer, director, conductor and fellow members of the cast.

The weight of the Florida premiere has been augmented by the April 7 death of Colin Graham, a
major force in American opera for a quarter century. Graham extracted the libretto of “Anna
Karenina” from Tolstoi’s novel and was slated to serve as stage director in Miami. “We had been
good friends for the past five years,” Kaduce says. “And — happily — I was still able to discuss
Anna with him.” It’s an opera, she says, in which one really needs a director because of the
complexity of the relationships within it.

Critically ill as the FGO premiere went into rehearsal, Graham’s death was not a surprise;
assistant director Mark Streshinsky was already deeply involved in “Anna” and ready to take
over. “Colin was my teacher and I felt well prepared to step in,” he says. “And I’m really excited
about the opera.” A major source of that excitement is working with Kaduce “She’s simply
perfect as Anna,” Streshinsky says. “She’s a real artist and she knows the novel so well. “And
she has the bearing of a real Anna.”

Kaduce describes her recipe for success as singing roles in which she “can produce a maximum
of sound with a minimum of effort.” And although she has been asked to sing Salome, she feels
that — just into her 30s — she is not ready to move into Strauss. Overly busy with opera,
Kaduce will sing her first recital in five years at the Santa Fe Chamber Music Festival this
summer. “This is a very tough business,” teacher Penelope Bitzas told a Boston writer in an
interview about Kaduce. “A singer has to keep going in the face of disappointments, no matter
what. And there’s the element of luck and of being in the right place at the right time. “Kelly is a
very hard worker. She’s very focused and mature. Her voice is this beautiful, round, dark,
yummy sound. She has a way about her when she sings — she radiates. “That’s something you
can’t teach. Singers either have it or they don’t.”