The Flying Dutchman is a frequent guest in this Mediterranean seaport
since it premiered here in 1885 as L’Holandès errant; not very surprisingly, since Barcelona is
also an early shrine of the Wagner cult in southern Europe. Sure, it’s a long way from Bayreuth:
patrons start clapping right after the overture and occasional breaches of etiquette take place after
favorite numbers, despite rebuking from connoisseurs. Yet the purest of Wagnerites had more
serious grounds for concern this time. The operatic debut of Àlex Rigola, born 1969, since 2003
artistic manager at the trend-making Teatre Liure, made them fear for the worst, as from that
seminary for avant-garde directors came both the talented innovator Lluís Pasqual and his former
assistant Calíxto Bieito (a notorious champion of deconstruction whom less friendly
commentators call “king of Eurotrash”). 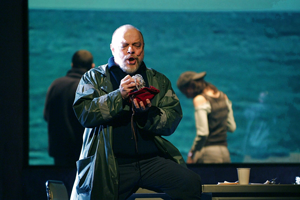 However, those who were afraid of — or possibly hoped for — one more scandal found
themselves mystified. Rigola’s Dutchman is moderately postmodern, with a definite flavor of
cinema imagery from the 1970s-1990s, but without turning that into a shortcut to relevance. As
stipulated by Wagner the librettist, the action is set on the coast of Norway, where Captain
Daland NOW owns a small plant of canned fish. Thus chorus girls abstain from turning their spinning
wheels while waiting for their betrothed to come back from the sea with costly presents. Donning
aprons and plastic caps, they either sit in the firm canteen peeling bananas and digging into
yogurt tubs, or tarry on the verandah, smoking and flirting in front of an ever-impending seascape
much realistically displayed on laser projection. The Dutchman’s ship, no longer a clipper
mounting “blood-red sails and black masts”, towers as a rusty cargo of humongous dimensions.
Updating reaches a climax in Act 3, when happy preps with their navels fully exposed dance to
disco rhythms waving beer cans high in the air and cuddling a cute golden retriever. Nina was the
name of that blonde four-legged diva, embodying her (fortunately) dumb role with unshaken
dignity. 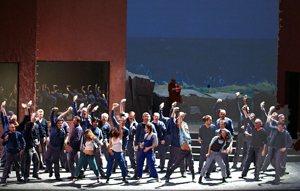 All in all, the time-machine gimmick worked smoothly enough. Gloomy thrill and rural romance,
hurricanes and country dances mingled in the visuals as they actually do in the amphibious score
produced by the then young Wagner, still hesitating between French opéra-comique and seeds of
his Wort-Ton-Drama to come. First-bill Dutchman Alan Titus, still suffering from a recent
ailment, was not fully up to his signature role, since his beefy bass emerged a bit muddy in the
lower register and feeble in the higher. Skimming the cream from both casts, special honor is due
to Tómas Tómasson, a Dutchman perhaps insufficiently sinister but technically faultless in
managing his baritone-sounding, flexible and alluring instrument, as well as to Susan Anthony.
Her Senta sported girlish innocence and exquisite mezza-voce, though not matched by volume
and resolution in the juiciest dramatic spots. As Daland, Eric Halfvarson impersonated a dapper
sea captain-cum-industrialist, with his noble Sarastro-like utterances unspoiled by the slight
shade of cynicism that the role imposed on him. Both tenors Kurt Streit (Erik) and Norbert Ernst
(the Helmsman) contributed clarion tones and romantic passion to their born losers’ characters
— yet with some bittersweet vibrancy in it. Under the newly appointed principal conductor
Sebastian Weigle, the house ensembles — supplemented by the chamber choir of the Palau de la
Música — offered a forceful, clear-cut rendering throughout the two-and-a-half hour stretch
without any intervals.