Jude Kelly’s
energetic production of Leonard Bernstein’s 1944 musical was originally seen here in
2005 to an extended run of full houses, so it can at least be said to have already proved its
worth.

Let loose for 24 hours of shore leave in New York City, three young sailors go in search
of some sightseeing and, more importantly, some female company. Small-town boy
Gabey (Ryan Molloy) falls in love with a picture of the subway beauty queen (‘Miss
Turnstiles’) Ivy Smith and sends his two friends out on a mission to make his romantic
dream a reality. En route, virginal Chip (Sean Palmer) and the more worldly Ozzie
(Joshua Dallas) quickly manage to land themselves a pair of nymphomaniacs, the taxi-driver Hildy Esterhazy and the archaeologist Claire de Loone – and the group set out ‘on
the town’ for the evening before returning to ship. 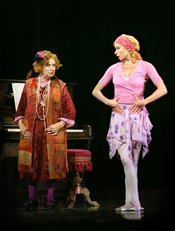 That’s basically it, as far as the plot goes. For all its brass, sex and comedy, the show is a
vignette depicting the transience of pleasure in a world where any or all of the young
sailors might soon lose their life in battle.

It’s a difficult piece to categorise, almost as much a ballet as it is a musical; the high-octane comedy numbers are balanced by romance and poignancy in songs including
‘Lucky to be Me’, ‘Lonely Town’ and ‘Some Other Time’. The dance numbers didn’t
work too well in 2005, but this time Stephen Mear’s choreography is slick and energetic.
Simon Lee’s conducting also seems snappier and more together than on the first hearing. 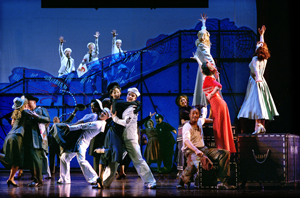 The three ladies all returned from the previous run. Caroline O’Connor’s Hildy was a
ballsy dominatrix with a voice to match. As Claire, the American Lucy Schaufer, a very
versatile performer (she’s also a Handelian mezzo) combined slinky dance moves with a
glorious vocal range including some terrific operatic high notes, and Helen Anker’s Ivy
was sweet, graceful and ingenuous. Conversely, the three male leads were new to the
production and, despite energetic performances and some attractive singing, were left
somewhat in the shade of the ladies – in fact the only really memorable performance
came from ENO regular Andrew Shore as Lucy’s long-suffering fiancé, Judge Pitkin W.
Bridgework.

Also new was the veteran British comic actress June Whitfield, in a memorably brilliant
performance as Ivy’s bohemian alcoholic voice teacher Madame Dilly, while Janine
Duvitski returned to give a touching comic account of Lucy Schmeeler, Hildy’s homely
roommate who eventually finds a perfect match of her own.