That schedule requires two
casts for the main roles, and the second cast performed on May 5th, with your reviewer in
attendance.

Peter Davison’s set of a two-story metal framework around a courtyard bears some resemblance
to a penitentiary, with sliding doors for the narrow homes of the Catfish Row residences. A
smaller frame for Porgy’s room rolls on at crucial points, and the Kittiwah island scene change
passes quickly, with the main set pushed to one side and a blue background dropped in. Zambello
expertly maneuvers her cast around this set, establishing the tightness of the community and yet
also the sense of oppression enforced by its poverty. 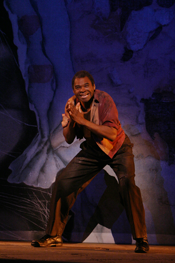 Dave Kopplin’s forthright program essay covers both the history of the opera’s creation and the
issues — controversy, if one must — about the nature of an opera about African-Americans
entirely created by whites. Likewise, it is somewhat unfortunate that here in 2007, one’s best
chance to encounter the talents of African-American performers on an opera stage remains in a
revival of the opera, but at least at this stage of our history, any controversy seems less pertinent
than an appreciation for the opportunity to enjoy the greatness of Gershwin’s score.

Zambello can’t do much about the libretto’s monochrome characterization, with the noble
residents of Catfish Row beset by trouble created by their much-less than-noble denizens (Crown
and Sportin’ Life). The whites are even more crude caricatures, cruelly and capriciously
exercising their power, here with unsubtle glee. 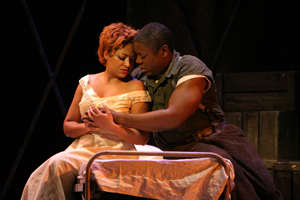 On Saturday night, Alfred Walker’s Porgy brought a deeper scale to the drama, fully inhabiting a
figure of quiet dignity, not merely self-pitying or helpless. Some may regret how the character’s
deformity was muted, with Porgy only reliant on crutches to move his weak legs around. In
Zambello’s depiction, Porgy is a man who has let his innate strength go unused, and it makes
sense to see him as less crippled physically than emotionally stunted, at least until his desperate
love for Bess makes him find that inner core of determination. Walker brought all this out
beautifully, and his firm bass-baritone voice rang out handsomely.

As Bess, Indira Mahajan sounded best in her ample middle voice, with the top a bit unsteady and
tending to spread. She made for a suitably seductive figure, although Zambello couldn’t find a
way to believably dramatize her change of mind when she decides to flee with Sportin’ Life to
New York City. Her frantic dashing around here made Bess look possessed. Victor Ryan
Robertson acted a wonderfully sleazy Sportin’ Life, but his light tenor needed more projection to
really bring home his big solos, especially “It Ain’t Necessarily So.” Terry Cook’s Crown veered
dangerously close to cartoon villain, making Bess’s attraction to him border on the incredible.
Thankfully Cook sang attractively enough to outweigh any quibbles.

Clara’s opening “Summertime” could have used a touch more sweetness from Alyson
Cambridge; after that, she sang well and her touching Clara made an appropriate contrast to Bess.
Eric Greene partnered her well as her husband Jake. Monique McDonald had the other big
female solo, with the most aria-like of the score’s numbers, “My man’s gone now.” McDonald
has a big, rich soprano and put this music across with operatic fervor. For your reviewer, the
preferred version will always be Sarah Vaughan’s.

Porgy and Bess has a large cast, and they all performed with enthusiasm, although Jennie Ford,
choreographer, may have wished for more time in rehearsal (Denni Sayers is credited with the
original choreography). John DeMain, long an exponent of the score, conducted the LAO
orchestra with professional precision.

The Gershwins’ and Heyward’s opera seemed at home on the Dorothy Chandler stage. Whether
one calls it a true opera or not, in a production such as Zambello’s, Porgy and Bess makes for a
memorable evening at the opera house.