Before attending the Volksoper’s season première of La Traviata, I had only days before visited
the tomb of the great man in Milan. As I stood at the foot of Verdi’s grave, it became a vibrant
reality that here lay one of the greatest musical dramatists in history and what’s more, he was
human; made of flesh like the rest of us and left us with a legacy of operas that have withstood
the test of time and continued to influence and instruct us on human behaviour and emotion. The
Traviata presented at the Volksoper was not at all what Signor Verdi would have had in mind for
his beloved Violetta.

The stage was pre-set with soprano, Roxana Briban, lying on a white bed in full view of the
audience for at least half-an-hour prior to the Prelude. The stage was minimalist, and at first it
seemed acceptable to use a minimalistic set since this opera is really about characters and the
depths of their emotions, not visual displays and spectacular props. Maestro Leopold Hager and
the Orchester der Volksoper Wien opened the opera with a precise tempo and inflection in the
Prelude, but it perhaps lacked the dramatic intensity that Verdi’s “high strings” should produce.
Meanwhile, Violetta stretched her hand out toward a little girl standing behind a scrim, tossing a
large plastic ball up and down. It was evident that Violetta was hallucinating and seeing herself
as a child during the Prelude, a concept that may have worked well, but ended up failing in the
end.

The dramatic opening was immediately interrupted by a masquerade complete with “masks” and
clown-like costumes; obviously, a different perspective from the typical ballroom party with
flowing gowns and tuxedos. The orchestra here began its slow and painful detachment from the
vocal component of the opera and unfortunately Maestro Hager never fully regained a sense of
unity. The “Brindisi” was rather boring in this masquerade-like conception; with young tenor,
Ismael Jordi trying his best to produce a sense of gaiety and excitement. A very handsome and
sincere performer, his tenor was very light for a role of this intensity and often imprecise;
especially taking Verdi’s orchestral support into consideration. Verdi differs from Puccini in that
he often leaves the tenor exposed at the ends of passages and in the higher tessitura with little
orchestral foundation. Mr. Jordi would have made a better Almaviva in Il Barbiere di Siviglia
than an Alfredo at this point in his career.

Most disturbing was the stage direction for the party-scene, with Violetta changing, on-stage, into
a clown outfit. Verdi’s intention was to have the audience witness her at her most exquisite:
beautiful, full-of-life, and healthy (or so we believe…or maybe want to believe); but here, the
direction casts her in a pantomime outfit and in the same pale white in which she would later die.
Her entrances in Un dì felice were detached from the orchestral fabric and she lacked any sense
of legato singing whatsoever. The orchestra was almost in another realm from Alfredo and
Violetta here, and the duet was spastic and unfocused rather than the intended display of
profound passion. The pair did not once look at each other throughout the duet and the necessary
spark that audiences crave between Alfredo and Violetta would never be ignited in this
production. 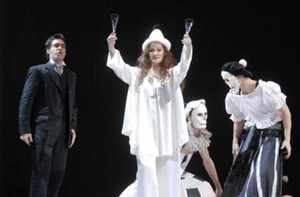 The first exhilarating moment…or what should have been, comes in Violetta’s Ah, fors’è lui che
l’anima, however it was not Violetta’s persona that became apparent here; rather, it was Ms.
Briban’s vocal and technical instability. It became clear that Maestro Hager and she were not in
sync and this aria became a fight for control. She stood in the center of the stage with the
rotating set moving around her. Her Italian enunciation was less than acceptable and she was
often out-of-tune on her pianissimi. It was as if Ms. Briban sang with three different voices
rather than the type of unified voice most vocal pedagogues and technicians impress upon the
young singers of today. Her low tessitura was extremely heavy for a Violetta, the middle was
pushed and strident. Her well-publicized pianissimi were so fabricated that one could hardly
hear them because she was, in fact, closing off the throat and air supply rather than using proper
breath support and an open throat to float them in a resonant place alla Leontyne Price or, more
recently, Renée Fleming. The bell-like quality of Violetta’s singing was missing. The Sempre
Libera was painful, and Ms. Briban was exuding huge waves of voice and then it would cut out
without transition from one part of the voice to another. Her missed entrance of Violetta’s
“Follie! Follie!” was enough to make any aficionado cringe and an embarrassment to the
Volksoper as a whole.

Once this disaster was over, the drama ceased to one ignited scream of “Brava!” and immediately
the entire audience mimicked the audience member. WHAT HAS THE OPERA WORLD
COME TO? Have we all succumbed to the glamour of beautiful faces and forgotten what this art
is really about? In my opinion, we have conformed to mediocrity and this performance of
Traviata would have had Signor Verdi rolling around in his grave. Who are we if we do not
stand up and protect the wishes and aesthetics of the composer who creates with such diligence
and precision? This production seemed more of a parody of Traviata than an actual presentation
of it. Is it acceptable to stage anything as long as we stage it in half-inflected Italian, with loud
and uneven voices and lots of clown outfits?! I stand in defense of Verdi’s honour and am
appalled that a Viennese opera house would stage something of this mediocre caliber. Had this
staging been performed somewhere where Verdi is seen as a national hero, like La Scala let’s
say, there would have surely been a scandal in the streets.

Mr. Jordi entered to try and save what had been a disastrous competition between conductor and
soprano and unfortunately made it sound even more like an undergraduate performance by
students. The only glimmer of light in this production was Baritone, Morten Frank Larsen, who
was at least in character and dramatic. His Italian was better than his colleagues, although not
where it should have been. His Pura siccome un angelo was somewhat strictly sung with a
stagnant orchestral accompaniment. There was not much room for rubato or any shading and
Maestro Hager kept it as strict as possible. Unfortunately, because of Mr. Larsen’s acting
capabilities and his colleagues lack thereof, it seemed that he was more in love with Violetta than
Alfredo was.

The chorus of Gypsies was the icing on the cake for this production imbued with clown-costumes
and more of a Pagliacci-like atmosphere than anything. All at once the chorus from Carmen
entered the stage!!!…well, they weren’t singing Bizet’s music but the chorus was decked out in
red and black Spanish outfits and the men were bullfighters flirting nonsensically with the
women. The chorus, although representative of Matadors, was very much detached from the
music and the actions seemed to have nothing to do with the text that was being sung. Again, the
audience seemed to accept this mish-mash of ideas that was incoherently held together by a
struggling orchestra and conductor. 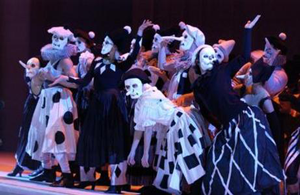 Act III of Traviata should be a display of what Verdi does best. He pulls at our heartstrings and
in a moment of luscious melodrama he allows Violetta to read her letter to the sounds of the
orchestra. Briban spoke in a harsh and violent chest voice and let out a yelp that resembled
something that an Elektra would scream, rather than a Violetta. Her Addio del passato, the
highest point of Violetta’s dramatic personae was spastic and her actions seemed more like a
Lucia (mad) than a consumptive Violetta. I felt no sympathy for her character as the uneven and
imprecise singing was enhanced by Ms. Briban’s throwing herself violently on the stage with
such a thud that I wondered if she had hurt herself. There was no saving Violetta by this point, or
the production for that matter.

The end had Violetta, who had remained in her white negligee throughout, lying back on her bed
with her outstretched hand motioning to the little girl tossing the big plastic ball up in the air.

In the end, she threw the ball and it went high into the rafters, representative of Violetta’s soul
leaving her body. How Violetta’s soul can possibly be represented by a ball is beyond me. In all,
this production could have been saved had the singing been at least precise and had Ms. Briban
and Maestro Hager agreed on “one” way to perform this opera. It was an example of how two
conflicting opinions can create havoc on-stage. What’s more, audiences of today seem to accept
anything as long as it’s presented in an “opera house.” Just because something is performed on a
stage does not necessarily mean that it deserves a scream of “Bravo.” At one time, the term
“Bravo,” or “Brava” was used for fantastic and outstanding performances; the type that one
remembers for years and years afterwards because of the immense talents of the performers,
musicians, and directors. This performance of La Traviata did not deserve such accolades.