The work is based on the Biblical account of Susannah and her Elders from the Book of Daniel, as it appears in certain Bibles. From that account we learn the Elders, who steadfastly lust after Susannah, spy on her while she is bathing and soon realize that the young beauty will never give in to their lascivious advances, so they accuse her of fornicating with a young man. This charge is eventually proven false, and Susannah is saved from death. Floyd, using a librettist’s poetic license, simplified the storyline by relocating the bathing Susannah to an isolated community called New Hope Valley in the Appalachian Mountains of Tennessee. There, she is observed by her own church Elders who are repelled by her audacity to bath in a small stream which is supposed to be used for baptism.
Obviously Floyd felt very comfortable with this regional setting which is reminiscent of his own upbringing as a minister’s son and uses what he thought was a natural reaction by folks who live in such a stark rural setting to Susannah’s spontaneous and frivolous behavior. Even in the 1950s, in the United States, with the McCarthy witchhunters combing the country looking for those with perhaps the slightest connection to the Communist Party, Floyd’s characters might have appeared a tad too quick to condemn what was perceived as Susannah’s immoral conduct and now, over 50 years later, with all the dramatic and diverse social changes that have occurred in American life, the pivotal situation of the plot does seem too pat. 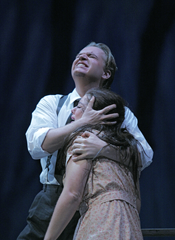 Any opera company that wants to mount Floyd’s opera has to get beyond this flaw so that it can present the work’s many dramatic and musical moments in a coherent and forceful light. And Arizona Opera did just that.
Perhaps the outstanding contribution to the production was Paula Williams’s direction. The director used Peter Dean Beck’s spacious and accurate setting of rural life in Tennessee to great advantage. She moved the chorus about the stage with ease, whether they represented the townspeople at an evening gathering of song and square dancing or had them as church goers pleading to the Lord to save them from the wages of sin. She gave the audience the feeling that it was watching the entire New Hope Valley community acting as one against the sinner Susannah. The director also helped to transmit the same dramatic intent to the featured and principal players, allowing them to build their portrayals with vocal stamina and security.
Starting with the smaller roles, the mezzo, Korby Myrick gave her Mrs. McLean the appropriate disapproval of Susannah’s public bathing. Glenn Alamilla’s tenor rang out as Susannah’s ambivalent suitor, never failing to express his fear of the unknown. Moving up to Robert Breault as Sam Polk, Susannah’s brother, he filled his character with the right amounts of love and affection mixed with his anxiety for Susannah’s future. He resolved his conflict by shooting the Reverend Olin Blitch, Susannah’s seducer in the last scene. And most times, Gustav Andreassen as the Reverend Blitch forcefully conveyed his staunch alliance with the Lord. The bass was most impressive in his sorrowful and guilt-ridden monologue on having violated Susannah.
The role of Susannah was the only part that was double cast. Fortunately for Arizona Opera, it found two sopranos who could provide this difficult and challenging part with the right emotional impact when needed. Rhoslyn Jones, a physically stronger Susannah than Diane Alexander was a tad uneven vocally, but her forceful sound portrayed her commitment to the role. Alexander projected a softer emotional approach, but was more consistent in showing how Susannah’s misery unfolded. It was a credit to both singers and to Williams how well the rest of the cast never missed a dramatic beat no matter what Susannah was on stage.
Conductor Joel Revzen kept his orchestra committed to Floyd’s overriding musical idiom: that of using many parlando melodies underscored by Appalachian ballads, gospel tunes and square dance music. At times, he drove the orchestra too hard, allowing the musical climaxes that expressed Susannah’s rage or Blitch’s stabs at redemption-to take two examples- to eclipse the singers’ vocal prowess that gave unerring testimony to their talents. This tendency, which made it difficult to catch all the nuances in the colloquial text the composer reveled in, kept the audience’s eyes glued to the titles, causing it to graze by some of the opera’s most intense dramatic moments. But overall, it didn’t detract from the performance which was one of the company’s most fruitful and fulfilling productions in recent memory.
Nick del Vecchio
[Reprinted from Living at the Opera with permission of the author.]