True, in
the St. Matthew Passion Bach composed one of the great music dramas of all time, but the opera
house itself was an arena alien to him. In Bach’s Baroque age opera was largely a courtly
concern, and the Saxon court was down the road in Dresden. Leipzig, mercantile, middle class
and Lutheran laced had neither time nor taste for the excesses of entertainment staged in the
Catholic capital.

Bachfest 2007, which brought 50,000 Bach fans to Leipzig, corrected this oversimplification of
music history.“From Monteverdi to Bach,” the theme of the season, brought a new view of the
situation — and with it new music — to light. Indeed, Leipzig had — or had had — an opera, but
it folded in 1720, three years before Johann Sebastian Bach arrived as Thomaskantor, the man
responsible for music not only at historic St. Thomas Church, but at other churches in the city as
well. That opera, nourished at its outset by talent “imported” from Dresden, was founded in 1693
and soon became a venue for young composers who had come to Leipzig to study.

Foremost among them was George Philipp Telemann (1681-1767), who, born four years before
Bach, outlived him by another 17. And, as the world well knows, it was only because the then
more popular Telemann turned down the job at St. Thomas that Bach was hired. Although
Telemann made written reference to 20 operas in his catalogue, until recently only half a dozen
arias documented his efforts in the field.

Now, however, an ambitious Michael Maul has proven that some 40 arias in a Frankfurt archive
were from Telemann’s “Germanicus,” which was given its modern premiere at the Bachfest ‘07
on June 11 by Gotthold Schwarz and the Saxon Baroque Orchestra. Written in 1704 and revised
six years later, “Germanicus” is a tale of love, lust and political intrigue based very loosely on
events during the first-century occupation of Teutonic territory by the Romans. Since only arias
survive, for recitatives Maul substituted a tongue-in-cheek narrative wittily delivered by actor
Dieter Bellmann. Through facial expression and a minimum of gesture a youthful cast made a
strong case for the quality of Telemann’s youthful opus. Unusual for that day, librettist for
“Germanicus” was Christine Dorothea Lachs, a woman with close connections to musical circles.

Leipzig is the heart of a region rich in music history, and to take advantage of that the Bach
Festival stages outings, several of which include recitals on organs from Bach’s day. The
season’s focus on Monteverdi took visitors to the tiny 1803 theater in near-by Bad Lauchstädt,
designed in part of Goethe and recently restored to his designs for its interior.

On June 12 it was the setting for Monteverdi’s 1640 “Return of Ulysses to his Fatherland” staged
by Christophe Rousset, who conducted his early-music ensemble Les Talens Lyriques from the
harpsichord. As Penelope and Ulysses Hilary Sommers and Jan Kobow headed a cast of almost
20 amazing singers, who left one wondering how after this highly dramatic achievement Handel
could have abandoned himself so completely to routine da capo arias. Rousset founded Les
Talens Lyriques in Paris in 1991. 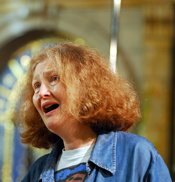 June 16,the penultimate evening of Bachfest ‘07, brought the Yorkshire Bach Choir and Baroque
Soloists to the Michaeliskirche for a performance of Henry Purcell’s “Dido and Aeneas” with
veteran soprano Emma Kirkby as the tragic heroine. Kirkby, a major presence in early music
since her debut in 1973, has a voice magically beyond the reach of time. Her Dido remains of
adolescent tenderness and touching innocence. (And, by the way, it is now Dame Emma.)

Bass Stephen Varcoe was — even if a cad — a noble Aeneas, and Helen Neeves a devoted
Belinda.

Conductor Peter Seymour, founder of the Yorkshire ensembles, included on the program Daniel
Purcell’s “Again the welcome morn we sing” and “Mark how the Lark and Linnet sing” by John
Blow, making this concert a generous sampling of English opera in Bach’s day. The above —
concert performances all — were accompanied by period-instrument ensembles that documented
both the quantity and quality of such players in Europe today.

Most unusual staging of the season was Steffan Schleiermacher’s updated version of “The
Combat of Tancred and Clorinda,” Monteverdi’s setting for solo voice of a key scene from
Tasso’s “Jerusalem Liberated.” Composer-pianist-conductor Schleiermacher, an outstanding
figure on Germany’s crossover music scene, is a man well versed in early music, and his
“Mackie Messer” approach to this dramatic confrontation, played on the second stage of the
Leipzig Opera, was gripping.

While baritone narrator Christopher Jung told the story amid modern instruments — the
accordion dominated — the ill-fated lovers were portrayed by dancers who appeared as if
marionettes on strings. Schleiermacher paired the brief work with Peter Maxwell Davies’
single-soprano “Miss Donnithorne’s Maggott” under the title “Lost Battles of Love.” 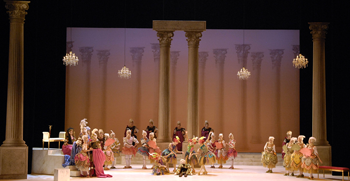 To further underscore the dramatic impulse brought to the arts by the Baroque the Leipzig Opera
staged the first-ever German performance of Jean Georges Noverre’s 1763 ballet “Jason and
Medea.” Danced by the opera’s superb ballet ensemble and directed in Leipzig by Jean Paul
Gravier and Claude Agrafeil, the production, which premiered on June 9, was a revival of a 1992
Strasbourg staging by Sweden’s grand old man of the dance, Ivo Cramer.

Jean Joseph Rodolphe’s original score was arranged by England’s Charles Farncombe. In the title
roles Martin Chaix and Kiyoko Kimura stressed the grace of dance before ballet went on its toes,
and in the fire and fury of Medea’s dance of revenge Kimura made this blood-curdling story the
direct antecedent of Samuel Barber’s score on the subject written almost 300 years later.

All Leipzig Opera performances are distinguished by the playing of its pit band, the esteemed
Gewandhaus Orchestra. For this performance on 9 July youthful Vincent de Cort conducted with
vigor. “You are a Prometheus!” Voltaire once wrote to Noverre. “You form humans and breathe
life into them.” In like manner this recreation was a truly Titanic achievement.

Increasingly aware of the importance of outreach programs, the Bachfest this year devoted an
entire day to events for children and families. High point of the day was a one-hour reduction of
Monteverdi’s “Orfeo” by Taschenoper Lübeck. The “pocket opera” production featured a mere
six musicians, some of them doubling as vocalists and instrumentalists. 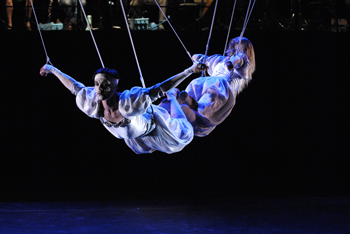 Founded in 2005 by students at the Lübeck Conservatory and dedicated to “big opera for little
people,” the talented ensemble brought kids on stage as extras and stage hands, and the entire
audience was rehearsed to appeal to Pluto for the release of Euridice. (Moved by their apprentice
musicianship Pluto pulled out a handkerchief and wept openly in response.)

While the “this-isn’t-going-to-hurt” approach that often puts classical music on a par with a visit
to the dentist at American kiddie concerts, there was here no talking down to the audience — six
is the stated minimum age for admission — nor was there any slapstick. Yet the kids that packed
the small Schille – Theaterhaus just minutes from St. Thomas Church were mesmerized by the
simple staging that depended on the music — not on carnival-of-the-animals gimmicks — for its
magic. Indeed, so fine are these young singers that adults in the audience would have welcomed a
complete “Orfeo” by the troupe, whose enthusiasm held listeners in its spell.

The production marked the 400th anniversary of “Orfeo,” the oldest opera in the extant repertory.
This impressive cross-section of early opera documented the spectrum of musical expression in
the early Baroque, while other performances stressed Bach’s role in bringing the age to its fullest
musical flower. And having suggested that the composer’s St. Matthew Passion qualifies as
music theater, an “extra” of Bachfest ‘07 was a master class, in which Peter Schreier worked
with four young tenors on the role of the Evangelist in the score. Schreier, now 72, was the
world’s top performer in this role during the final decades of the 20th century.