Mozart’s late masterpiece is one of the most serious operas I have seen David McVicar direct,
and although this production contains plenty of allusions to his distinctive directorial style, it is to
his credit that he does not try his trademark trick of trying to turn the piece into a black comedy.
His interpretation here is truthful and largely gimmick-free. The choreography (originally by
Leah Hausmann, revived by Kai’a Lane) and sets (by Yannis Thavouris) are Japanese-inspired,
and beautiful in their simplicity. The curved walls of the set move on and off in graceful arcs,
creating light-and-shade effects, while the stage direction has a fluid, balletic quality. It helps that
there are so few people on stage; the chorus sing from the pit, so the large stage is populated only
by soloists and dancers.

Many of the cast returned from the original run. Paul Nilon repeated his impressively sung
account of the title role, but there is still a feeling that he hasn’t found a great deal of complexity
within the character. Emma Bell’s vocal performance as Vitellia was once again grippingly
dramatic, though some of her characterisation verged on caricature (the most vengeful of her
recitatives even raised a laugh from the audience). 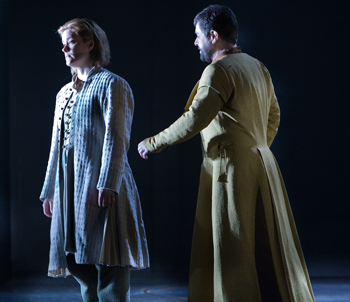 New to the cast, Alice Coote was announced as suffering from a chest infection and although she
showed a little vocal fatigue, she sang Sesto with remarkable breath control and sense of line.
She also brought a refreshing sense of cohesion to the character development: ‘Parto, parto’ was
no blazing showpiece but an impassioned piece of extended dialogue, all very much in context.
In fact, all the scenes between Sesto and Vitellia.had an unusually palpable sense of dramatic
harmony.

As Annio, Anne-Marie Gibbons gave an amiable and charming performance though her singing
was a little monochromatic, and her voice was mismatched with Sarah-Jane Davies’s weightier
Servilia.

In the pit, Edward Gardner kept the ensemble tight but the performance lacked energy and drive,
especially in the more turbulent passages.