In a down-home way, Boston’s biennial Early Music Festival achieved this to a remarkable
extent: instrumentalists and singers from the front ranks of antique performing practice led by
BEMF’s longtime opera conductors, Paul O’Dette and Stephen Stubbs, the staging glamorous
but basic, with elaborate dance interludes that were always a significant part of (often the
principal excuse for) opera in France, costumes worthy of a costume ball at Versailles, and
elaborate stage machinery — there’s a whole lot of flying going on, and entrances are made from
above as often as from the wings.

Opera is not a word Lully or his collaborators used for such pieces, and indeed at that point no
one in France was quite sure what “opera” meant. Tragédie lyrique, a sung and acted drama, was
the thing. Lully’s dignified and magical creations soon circulated about Western Europe. Much
of the singing is declamation of stately rather than lyrical melody, a grand manner passed on via
Rameau to Gluck, Berlioz and Poulenc. (Wagner made effective use of it too.) This can be
unsettling to the average operagoer, accustomed to the song-like manner of Italian opera; but the
appreciative audience at the jewel-box Cutler Majestic Theater, accustomed to the stylistic
vagaries of older music, ate it up. What gave more pause is another enduring eccentricity of
French style: the equal rights accorded to ballet. There are dances throughout Psyché, and the
piece concludes with a good half hour of it. This was very prettily achieved in the court manner,
but the Boston audience wearied about halfway through the long finale. This is not to fault Lucy
Graham, the choreographer, who found exceptional variety in the fixed gestures and poses of
court dance, and introduced several whimsical interludes, including a ten-minute “commedia
dell’ arte” mimed by the traditional Italian figures. (The enormous and obviously devoted
production team included a “Vocal and Gesture Coach.”)

The story is the late classical myth of Psyche (“Soul”), the mortal so beautiful that a jealous
Venus vows to destroy her. Venus’s son (L’Amour in the French version), charged with the girl’s
destruction, falls for her himself and carries her off to a magical palace where, however, she is
forbidden to see what he looks like. Of course, she cheats (cf. Lohengrin and Bluebeard) — in
Psyché, it’s because Venus tricks her into doing so — and he leaves her. To get him back, Psyche
must descend to the Underworld to fetch Venus a box of beauty from its queen, Proserpine. Of
course, she peeks into the box and is lost — but this time the gods relent, Jupiter promotes her to
goddess, and all ends happily with the Soul mated to Divine Love. (The subtext, as program
essays made plan, concerned the love affair of Louis XIV and Madame de Montespan.) 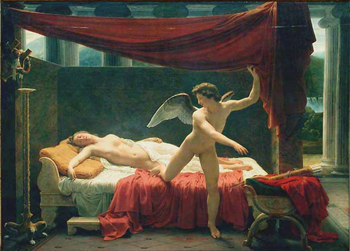 Among the singers, as was only proper, the finest had the largest parts: Carolyn Sampson, the
pretty Psyché, who sang and acted her long role with conviction and sweet, untiring tone, and
Karina Gauvin, as Venus, the opera’s heavy, a role she acquitted with great verve. The episodic
narrative included many charming episodes, wittily staged — for instance a marital spat between
Gauvin and Colin Balzer, whose lyrical tenor seemed far too attractive for Vulcan, the
hardworking smith-god: “You always side with lovers and against husbands,” he sang to her, and
the joke was as good in 2007 as in 1678. Lully wrote the Furies — usually visualized as
shrieking women — for three low male voices, and the production accordingly presented three
men in black, seventeenth-century drag to berate the heroine for intruding upon the dead.
L’Amour was acted and, for a line or two, sung, by a winged child actor in order to conform to
Cupid’s traditional iconography, but for the wedding night the god magically adopted the form of
a full-grown tenor the better to sing duets with. Of the mostly able singers in the many smaller
roles, countertenor José Lemos as Silenus had a ravishing sound one would be eager to encounter
again.