When one looks back at early videos of the first competition in 1983 and compares
with today’s slick production several things become evident. In 2007 there is a far larger
geographical spread of contestants and there is now remarkable vocal quality-in-depth. On a
more frivolous front, and perhaps indicative of current obsessions with image in the world of
opera, the frocks on display have also become extremely sexy and chic compared to their
distinctly dowdy predecessors. The men’s tailoring has changed rather less, it must be said,
although it is obvious that they, too, are now more aware of their presentation on stage – one
Finalist this year, countertenor David DQ Lee, looking particularly stylish.

Since that first competition (which, incidentally, Karita Mattila won) there have been many
exciting, memorable performances and vocal trials of strength. Who can forget the 1989 “battle
of the baritones” between Bryn Terrell and Dmitri Hvorostovsky? This bi-annual contest has
grown steadily in size and stature over the years, and it is now regarded as one of the premier
singing competitions in the world. Certainly recent Winners and Finalists of both the Main Prize
and the Lieder Prize read like a contemporary hall of fame: Nicole Cabell, Ailish Tynan, Katarina
Karnéus, Lisa Gasteen, Marius Brenciu, Christopher Maltman and Andrew Kennedy, to name
just a few. 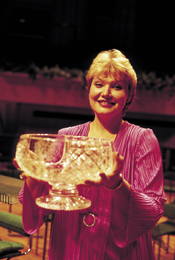 This year’s competition will have been hard-fought and exhausting for both juries and
contestants – over 1000 people applied to take part, 677 from 64 countries took part in auditions
held in 44 locations around the globe, and the final 25 singers who have survived the selection
process so far arrived in Cardiff this week. Although the two Prizes are valuable in monetary
terms – £15,000 and £5,000 for Singer of the World and the Rosenblatt Recital Song Prize
respectively with £2,500 for each of this year’s other four finalists – it is the world media
exposure that is often the key to future success for these young performers. Cardiff is a shop
window, par excellence.

One very famous face who is there to welcome them is the competition’s Patron, Dame Joan
Sutherland who said “the competition is always a wonderful experience for not only the St.
David’s Hall audience and multimedia audiences across the world, but is also a delight for every
competitor taking part.” Today, Cardiff Singer of the World is very much a global
entertainment, with a TV, radio and online audience of eight million able to watch, listen and
download information on the wealth of young vocal talent on display, not forgetting, of course,
those frocks.

The competition is now under way with the two Finals being decided on Friday and Sunday
nights. Details of timings, tickets, master classes and contestants are available online at
www.bbc.co.uk/cardiffsinger