And the work has all the
markings of a masterpiece; indeed, it gives rise to the hope that he has another opera up his
sleeve.

The composer of a spate of operas, Pasatieri is best known for “The Seagull,” premiered at the
Houston Grand Opera in 1984. A few years later he put opera aside and moved to Hollywood. (If
you’ve seen “American Beauty,” “Fried Green Tomatoes” or “Magnolia” you’ve heard him —
probably without realizing it.)

“Frau Margot” is a collective endeavor that involved the talents of many people over a long
period of time. “Nest egg” was a report brought to librettist and director Frank Corsaro from
Vienna by Leonard Bernstein. The then young conductor/composer had visited Helene Berg,
widow of composer Alban Berg, whose opera “Lulu” was left incomplete when he died in 1935.
Bernstein – like many others – sought permission to finish the score from Berg’s sketches for a
third act. (Performances of the completed two acts had become common.)

Frau Berg refused after consulting with her late husband through a sèance, the Internet of that
age of rampant spiritualism. (A good bit of laudanum helped her make the connection.) The
widow refused permission — as she continued to do until her death in 1978.

Corsaro made a play of Bernstein’s story and called it “Lyric Suite,” the title of Berg’s most
performed chamber work. However, given the near-universal aversion to dissonant music, he was
unable to find a producer. On a visit to New York in 2003 Pasatieri told Corsaro, the director of
the Houston “Seagull” and several other works by the composer, that he wanted to return to
opera. Corsaro gave him his play. Then FWO general director Darren Woods ran into Corsaro
and Pasatieri at a party. Woods was seeking a project for “down the road,” and “Frau Margot”
was commissioned. 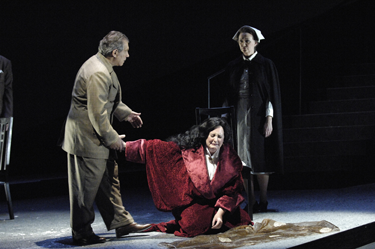 Corsaro then turned his drama into a detective story, a Gothic tale of a widow’s murder of a
former mistress of her husband. (It was long suspected that Frau Berg kept the “Lulu” fragment
under wraps because it documented her husband’s extra-marital activity.) Corsaro gave the
characters fictional names and began the new version with an investigation of the murder,
followed by a flashback to the Bernstein story. The young composer shared the beds of both the
widow and of Kara Sondstrom, who had been the mistress of the deceased master. He set the
story in Amsterdam, which, however, is clearly a facade for Freud’s Vienna with its seething,
all-pervasive sexuality. In that l’art pour l’art age “reality” had become an elusive concept that
allows us — as Hugo von Hofmannsthal, the greatest poet of the age, said — “to play theater —
play the characters in our own dramas.”

At first glance it might seem that the librettist muddied the waters needlessly with his additions
to music history. Things were complex enough in the Berg household without emendations. Yet
even the shadow of lesbianism that darkens the co-dependency that bind Margot to Kara is no
more than a reflection of the obsession of fin-de-siècle Vienna with matters of the flesh. About
the city at that time Viennese author Stefan Zweig wrote that “the air felt perfumed and
unhealthy; a dishonest morality hung over us like a nightmare.” And man-about-town Karl Kraus
commented that Vienna was “spiritually bankrupt.” And it was in spite — or perhaps precisely
because — of that it was also the scene of a golden age in the arts.

With amazing success Pasatieri has captured all this in a score of a voluptuous splendor that
suggests Klimt’s gilded paintings set to music. And this is what makes “Frau Margot” a
masterpiece, for the composer has not only laid bare the nervous mental machinations of his
characters; he has rendered turn-of-the-century Vienna with its undertow of threatening darkness
audible. A muted sadness speaks from the libretto’s reference to “the hope for that love that
sustains the fragile heart and makes life durable.” This melancholy sounds again from the final
confession of the major male characters in the opera: “I have not lived the life I meant to live.”
“Life and death,” Corsaro writes, “are one and the same.” Small wonder that Pasatieri’s gorgeous
music speaks with heavy eyelids.

The score — three hours with two intermissions — pulses with an uninterrupted rapture that
draws listeners into the music, putting them — as it were — on stage in the middle of the action.
Two changes, however, must be made. The “barber-shop” quartet of waiters in Act One breaks
with the style of the work and should be excised. And the spoof of ageing divas was especially
tasteless when such senior sopranos as Catherine Malfitano and Evelyn Lear — both with
long-standing connections to the FWO — were in the audience for the premiere in Fort Worth’s
handsome Bass Performance Center.

“Frau Margot” was written for Lauren Flanigan, who in the title role could easily be taken for one
of Klimt’s well-born models. And her fundamentally lyric soprano has just the dramatic heft that
the part demands. “Stumbling along in her loneliness,” as the libretto says, she was here a
stunning incarnation of the uneasy splendor of the age. 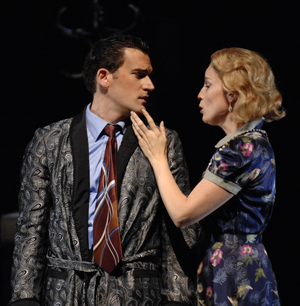 The “who-done-it?” frame within which the story is told was nicely provided by Canadian
bass-baritone Daniel Okulitch, and Alan Glassman had the required maturity to make his
unrequited love for Margot touching.

The single set by Alison Nalder was entirely in black and white with scene changes achieved
through enlarged background projections of buildings and people. Costumes true to the period
were by Steven Bryant.

FWO music director Joseph Illick, involved in early workshops on the score, demonstrated a
refined understanding of the work, and members of the Fort Worth Symphony outdid themselves
in recreating the lush “feel” of the story’s era.

“Frau Margot” has been the centerpiece of Fort Worth Opera’s 60th anniversary celebration,
which has witnessed a total reshaping of the company’s season. In recent years FWO has spaced
three productions during the fall/winter season. Now it has consolidated them in a three-week
early summer festival that focuses special attention on both the FWO and its home city.

“Frau Margot” has alternated on stage with “Madama Butterfly” and “Falstaff,” and in a joint
enterprise with the city’s Cliburn Concerts the festival included a gala performance Rossini’s
Petite Messe Solennelle. (Fort Worth is home to pianist Van Cliburn and the international
competition that honors him.) In 1981 FWO commissioned a children’s opera from Thomas
Pasatieri and that adds yet another layer of meaning to his “return” to opera — and Fort Worth —
with “Frau Margot.”

Pasatieri, born in 1945, was a prodigy both as pianist and composer. He studied in France with
Nadja Boulanger and earned the first doctorate given by the Juilliard School.

Footnote: It was an open secret in imperial Vienna that Helene Berg was the child of Kaiser
Franz Joseph I, whose mistress her mother had been. A singer of note, she was cut from the same
cloth as femme fatale Alma Mahler. Indeed, it seems that Corsaro and Pasatieri have given Frau
Margot something of the allure of the legendary Alma.