It’s in performing that task that he falls in love with Sophie and sets out to unmask Ochs and rescue her from the union with him. Thus it’s surprising
to read that the working title of the opera was “Ochs von Lerchenau,” assigning to this elder in
the cast a hegemony hard to find in the completed opera.

The answer, of course, is so simple that one hardly need ask the question at all. For the central
figure in “Rosenkavalier” is the Marschallin — “Resi,” not only because all others in the drama
are defined by their relation to her, but because of the immense weight that composer Richard
Strauss and librettist Hugo von Hofmannsthal have woven into the complex character of this
woman at a crossroads in life.

Any doubt about this assertion is removed by studying — not merely reading — the text of the
Marshallin’s monologue that ends Act One of “Rosenkavalier.” And it was here that the
shortcomings of the production on stage at the San Francisco Opera in June were most sharply
felt. (At this point one recalls with amazement how relatively recent it was that in this country
one listened to this essential section of the drama with only a summary of the plot in hand.)

This self-confrontation that begins with the Marschallin looking in a mirror and realizing that she
— caught now between the contradictory faces of “love” as incarnate in Octavian and
treasure-seeking Ochs — is at a turning point in her life. And it is the Marschallin of Soile
Isokoski that makes this staging problematic. Just 50, the Finnish soprano sang intelligently and
with refinement, yet her Marschallin was more country club than Kärntnerstrasse. Indeed, it was
surprising to read that she has been a success in the role in both Dresden and Vienna, the two
cities that are “home” to “Rosenkavalier.”

Isokoski has an essentially small voice, adequate perhaps in Europe’s smaller venues, but
insufficient for the War Memorial Opera House, where the opera was seen on June 21. More
disturbing, however, was the absence of warmth, of that climacteric, mid-life, near-valedictory
radiance, that the role demands. Isokoski had clearly thought her way through the Act-One
monologue, yet one missed the accents, the stress on crucial lines, that make the text meaningful
— and moving. In it the Marschallin reflects on her own arranged and loveless marriage.
(Although she has been wed for a considerable time, the question is nowhere asked whether she
is a mother. One tends to think not, but it’s a further point to consider.) “Die Zeit, sie ist ein
sonderbar Ding,” the Marschallin sings, “strange, this time business.” And it’s here that one must
pause and praise Hofmannsthal, Strauss’ major librettist, for what is no doubt the finest text in all
of opera. (One assumes too blithely, by the way, that “Rosenkavalier” is written in Viennese
dialect. Hofmannsthal created rather an idiom all its own to tell the story of this opera — still
strangely billed as “comic.”) 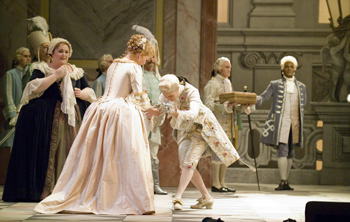 Not to turn a review into a German lesson, but Hofmannsthal took
advantage of long-established license to omit the adjective ending that in common practice would
make time “ein sonderbares Ding.” It’s the absence of the ending that makes this poetry and
complements the haunting meditative force of Strauss’ music at this point.

The monologue is a moment of major crisis in the life of the Marschallin, and it prepares the way
for her re-entry into the drama late in Act Three. (She is completely absent in Act Two.) The
Marschallin, although she here foresees her loss of Octavian from the outset of the drama, is
nonetheless unable to rise above it when it happens. The role calls for renunciation —
“Entsagung,” to use the word made commonplace in German by Goethe, that real-life Giovanni,
when a late-life love fell short of fulfillment. She must transcend the limits of personal passion to
offer an example of humility, dignity and strength. And this Isokoski did not do. Indeed, she
approached the monologue as narrative rather than as the introspective interior monologue that it
is. 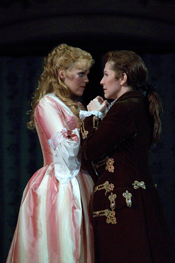 It’s a hard thing to put into words, but the recollection of another Marschallin helps makes the
point. At age 62, Italy’s Renata Scotto, the Butterfly of an era, performed the Marschallin — her
first role in German — at the Spoleto Festival in Charleston, South Carolina. Before opening the
final trio, in which the Marschallin recalls her vow to love Octavian so much that she would also
love his love another, the Italian soprano left the young couple behind her and stepped close to
the footlights. At that moment she conveyed a pain so intense and all-consuming that sitting in
the audience one felt is physically. That’s the stuff that a great Marschallin is made of, and
Isokoski was more involved in telling the woman’s story than in communicating the searing
experience of it. “Rosenkavalier” is not the place for Brecht’s alienation technique.

A last comment on this Marschallin: In a mere two words Hofmanmsthal/Strauss gave the
Marschallin one of the great exits in opera. She leaves the stage with Sophie’s upward-striving,
nouveau riche father, who — with no idea of what has really gone on — remarks insipidly about
the new match: “Well, that’s the way it is with young people.” “Ja, ja,” she says. The words,
more spoken than sung, can be delivered in many ways. Bad losers say them with a
“come-up-and-see-me-sometime” batting of the eye; others make “Tja, tja,” a resigned shrug of
the shoulders that translates loosely: “Another day; another lay.” As with the great monologue
Isokoski spoke them outside herself with no indication of feeling. She might have been operating
in the third person.

Major interest in the SFO revival of the company’s 1993 production that has seen Felicity Lott
and Renee Fleming as the Marschallin was the role debut of Joyce DiDonato as Octavian. The
fast-rising American mezzo, already famous on both sides of the Atlantic as Cherubino, Rosina
and the Cinderellas of both Rossini and Massenet, was a wondrously youthful, indeed, even
adolescent Octavian who sang without effort in a many-colored. While she was a delight in her
exuberance, the absence of an equal partner leaves DiDonato’s Octavian for the moment a
work-in-progress that will grow through coming years. She is further a fine actress, ideally suited
in appearance for this greatest of trouser roles. Strange that Isokoski, a largely removed
Marschallin, was never swept into the wake of the erotic exuberance with which DiDonato
opened the performance.

The one truly perfect member of this cast was Sweden’s Miah Persson, who — not surprisingly
— has already sung Sophie at the Salzburg Festival. Persson had it all — the beauty, the
convincing innocence and the healthy touch of rebellion with which she realizes that she is
nothing more than the pawn in the self-advancement game that pairs her father with the lecherous
Ochs. 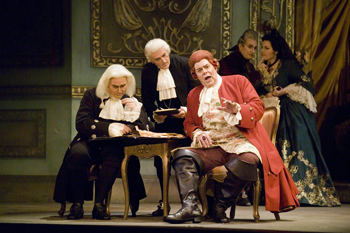 The Ochs in this Scandinavian-heavy cast, a last legacy of Pamela Rosenberg’s unlamented
tenure as SFO general director, was Iceland’s Kristinn Sigmundsson, a favorite here since his
exemplary King Marke in last October’s “Tristan und Isolde.” Aware that despite his uncouth
and bumptious behavior Ochs is an aristocrat and a gentleman, Sigmundsson eschewed the
slapstick that often makes this figure a cartoon caricature played for laughs.

Robert McPherson sang the Act-One Italian aria someone too robustly.

Last but by no means least, the person who made this “Rosenkavalier” memorable in quality was
conductor Donald Runnicles, who is approaching the end of his 15-year tenure as SFO music
director. Remarkable perhaps that in his non-verbal role it was Runnicles who displayed the
greatest appreciation of — and sensitivity to — Hofmannsthal’s poetry. Indeed, the nuances
sometimes missing on stage were all there in his work with this late great masterpiece of opera.
And although Runnicles gave full rein to the open sexuality of Strauss’ score, he never allowed it
to descend to the level of sweat and steam. And thus it’s no wonder that Runnicles is today
among the most respected conductors of Strauss and Wagner in Germany.

Adding a historic perspective to the staging was Thierry Bosquet’s recreation of Alfred Roller’s
sets for the 1911 Dresden premiere of “Rosenkavalier,” an idea hit upon by then-SFO general
director Lotfi Monsouri.

Sandra Bernhard, long a member of the SFO production staff, directed this revival. A person
richer in Straussian smarts might have done more to bring coherence to the staging.

Joyce DiDonato recently received the second annual Beverly Sills Artist Award — at $50,000 the
largest of its kind in the US — from an endowment in honor of Sills, who, along with Nathan
Leventhal, selects the winners. The purpose of the award is to aid recipients in career
enhancement, including funding for voice lessons, vocal coaching, language lessons, related
travel costs, and other career assistance. The first winner of the award, given last year, was
baritone Nathan Gunn. DiDonato is an alumna of the SFO Merola Program, the Houston Grand Opera Studio and the Santa Fe Opera Apprentice Program.

This production marked the SFO debuts of Isokoski and Persson.