Yet both stagings
had in common a deep respect for ó and knowledge of ó the original
dramatic concept and the underlying music, something increasingly rare
nowadays.

In fact, both young directors have one more common feature, since their
fathers Duilio Courir and Claudio Abbado rank among Italyís shining stars
ó in music criticism and in conducting, respectively. Being born into the
trade at such top levels may rather work as a hindrance, at least when a
budding professional is determined to build his/her own independent career
without relying on family connections. Ms Courir is one such case, having
debuted in opera direction relatively late in 1994 with an appreciated
staging of Vivaldiís Tamerlano at Veronaís Teatro Filarmonico,
at the age of 30 and after diverse experiences in spoken drama. 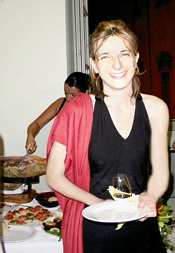 Actually, most of her educational curriculum pointed towards opera. The
10-year girl who used to sing in the childrenís choir at La Scala grew up
to study music at the Scuola Civica di Milano, alongside humanities, theater
and musicology at the State University in the same town. For a period, she
even took singing lesson from the vocal scholar Rodolfo Celletti, also
attending the masterclasses held at Fiesole (Florence) by Walter Blazer, the
well-known teacher from the Manhattan School of Music. As to direction, she
apprenticed with such masters as Dario Fo and Luca Ronconi ó but
particularly Egisto Marcucci, noted for his rigor, discrimination of, and
in-depth research on, texts, whether sung or spoken.

Courirís latest opera staging, Verdiís Il trovatore,
generally counts as popular fare; however, her reading thereof appears
unconventional, aristocratic and upstream ó starting right from its
location: an outdoor arena at Vigoleno, soaring high on the green hills
between Parma and Piacenza in the Po Valley. The castle and hamlet of
Vigoleno, built in its present form during the 1390s, was a meeting point for
the culturati during the 1920-30s. Gabriele DíAnnunzio, Max Ernst, Jean
Cocteau, Artur Rubinstein among Europeans, Mary Pickford, Douglas Fairbanks
and Elsa Maxwell from the USA; all were guests here at the duchesse
de Grammontís, born princess Maria Ruspoli (incidentally: from the same
family who offered lavish hospitality to young Handel in Rome). 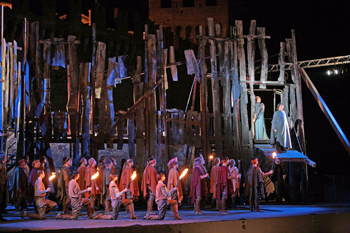 The castle itself, with its towers, battlemented walls and gates, provided
a hyperrealistic backdrop to a plot set in no less than two castles in Spain
during roughly the same age: Aljaferia and Castellor. Light years far from
the current trend of European opera direction, where the setting would be
typically a dilapidated industrial plant, a garage, a gay bar, a spacecraft
or whatever else. Tall wooden boards, all crooked and scorched, served as a
camouflage for covered bays were patrols were doing their rounds. A
drawdbridge suspended over a dark gulf was alternatively the springboard
whence Manrico was expected to launch his treacherous high Cs in ìDi quella
piraî and the stairway plunging into the dungeon ìwhere the State
prisoners languishî. Less blacksmiths than dyers, the Gypsies hanged out
the garish product of their industry from virtual battlements mirroring the
real ones, or celebrated and sung by torchlight while squatting down in
circles around certain disquieting cauldrons. Tribal and gloomy with a shade
of the Orient ó such was the medieval Spain conjured up by Courir and her
team: set designer Guido Fiorato, costume designer Artemio Cabassi and
Fiammetta Baldiserri in charge of lighting. 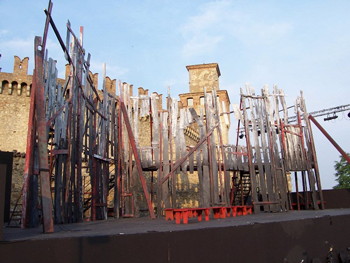 Within that (basically reliable, yet never archaeologic) framework, bodies
shaped their passions in the mould of unavoidable melodrama. The lecherous
Count attained by bitter qualms of conscience in the end; Leonora a
compassionate Madonna in light-blue train; Manrico a greyish bachelor,
moonstruck by misfortune and clearly a noble born-looser. Azucena towered
throughout in her fiery red gowns, as young and sexy as possible. Rather than
Manricoís mother, she looked like his paramour, while a manly Ferrando kept
jerking her with ill-conceived desire. Side characters, nuns, warriors,
courtiers and sundry extras navigated smoothly, then suddenly disappeared
behind the boards. Perfect clockwork and grand opera on a grand scale, though
with limited means.

The junior singing company was enough well-matched (a crucial requirement
for Il trovatore), with baritone Claudio Sgura getting the best
applause for both his vocal qualities and sensitive acting. Rachele Stanisci
(Leonora) has her strongpoint in agility, as Laura Brioli (Azucena) in sheer
power; yet a more restrained vibrato during their forte passages would not
spoil. As Manrico, the experienced tenor Renzo Zulian sounded strangely
fatigued and/or unhappy with his upper register, probably due to a
last-minute stand-in for an ailing colleague. Orchestra Filarmonica Toscanini
and Coro del Teatro Municipale di Piacenza, both emerging ensembles, were led
by Massimiliano Stefanelli with unrelenting pulse, despite a troublesome
acoustic environment. Outdoor venues have their pros and cons, particularly
during a windy early Summer as this is proving to be.