Jen?fa tells the story of a young woman who finds herself as the
central figure in a flurry of ill-fated and violent relationships. She is the
focal point around which all of the other dramatis personae rotate.
In this character-based production with stage direction by StÈphan
Braunschweig and Sceneographer, Alexandre de Dardel, the opera opens with the
lovely Jen?fa, played by American soprano Emily Magee, kneeling at center
stage looking at her pot of beautiful flowers. Behind her, the stage splits
open as if a highlighter ran across the wooded floor and out of the opening
expands an enormous rotating windmill. The turning of the windmill is
represented during the prelude, beautifully conducted by Maestro Lothar
Koenigs, by a repeated xylophone note, a sound that Jan·?ek returns to
frequently during the first act. The orchestra della Scala was sensitive and
decisive with the composerís lyricisms and signature ethnic rhythms.

The mill, now belongs to äteva Burja, played by Bass-Baritone Ian Storey,
leaving his older brother, Laca, played by Tenor Miro Dvorski, with little
inheritance. Both brothers are in love with Jen?fa however she is pregnant
by äteva. As the scene changed to open the first act, she anxiously awaits
ätevaís return from the conscription ceremony, where it was to be decided
whether he was to be drafted to the army. Jen?faís, Uû se ve?er
ch˝lÌí (ëNight is already fallingí) was brilliantly expressed by
the La Scala orchestra and in technically precise and beautifully lyrical
phrasing by Ms. Magee. Her soprano is well balanced and projected wonderfully
in the helpful La Scala acoustics.

In a fine vocal and dramatic presentation, Miro Dvorski sings his jealous
ëVy sta?enkoí (ëYou, Grandmotherí) with a broad tenor that
exhibited a burnished middle voice and just the right amount of
ëaffogatoí in the upper tessitura. The following scene introduces, alto,
Mette Ejsing as Grandmother Buryjovka. Ms. Ejsingís voice had round and
lush qualities that produced a striking contrast to the already diverse cast.
The end of the act brings the news that äteva has, after all, not been
drafted and this leads fantastically into a hubbub reaction by the La Scala
chorus who was unified and harmonically sublime in their excitement and
celebration. Their entrances and were sheer perfection and there was not one
voice out of balance. Each contributed uniquely to the unified whole of this
chorus.

At the climax of the ensemble, ëVöeci za ûenijaí (ëAll
are getting marriedí), äteva finally enters. Mr. Storey exhibited his
strong bass-baritone, a resounding roar-like sound with a beautiful
upper-tessitura and a technically proficient ability to create lyricism while
effecting power; a difficulty for some baritones Mr. Storey made it look as
easy as pie. Dramatically affective, Mr. Storey plays a drunken äteva while
the chorus merges in a dancing frenzy that culminates in a wild orgy-like
event. The action climaxes here with the powerful and vibrant entrance of the
sternest of operatic femme-fatales, but fatale in its most literal
and frightening sense. With a single gesture Kostelni?ka silences the music
and all become silent; a silence that screams at us with its potency and
darkness, Jan·?ekís dramatic sense here is articulated perfectly by
Maestro Koenigs and the La Scala orchestra. Jen?faís stepmother is the
Sacristan as the local church and a woman of little means but enormous moral
authority.

At first Ms. Siljaís voice seemed overly shrill and harsh in comparison
to the rest of her colleagues, but her dramatic skill was impeccable and even
overpowering, as is required of Kostelni?ka. As she began her ëAji on
byl ûlutoh?Ìv˝í (ëHe too was also golden-hairedí), the
stepmother asks Jenufa to wait a year before marriage and explains her
reasons; reasons that relayed to her own personal experience of suffering in
a marriage of abuse and violence. Ms. Siljaís voice grew warmer and the
power of her instrument is truly remarkable. Noted for this role, her
background in Wagnerian roles and the sheer exuberance of her laser-like,
red-hot voice gave the impression that Ms. Silja had not merely become
Kostelni?ka, but that Kostelni?ka had clearly inhabited Ms. Silja in
complete form. The stepmother forewarns Jen?fa of the possibility of having
a life similar to her own, and the negative and bleak prospect of having to
raise a child alone would be disasterous; not just personally but
socially.

This give rise to Jan·?ekís masterful, full-scale concertato for four
voices and chorus composed on the grandmotherís words, ëKaûd˝ p·rek si
musÌ svoje tr·penÌ p?estatí (ëEvery couple must get over its
problemsí). The unity and perfection of the ensemble, soloists, and
orchestra give testament to the grandeur and precision that inhabits the
walls of the teatro. It gives reason to why audience craves to
witness opera here and why La Scala maintains its sacred place as a temple of
music. At the end of the act, the xylophone returns to remind us of the
dramatic web the turns, just as the windmill does, around the ill-fated
Jen?fa.

In the remainder of the act, Mr. Storeyís musicality and dramatic
prowess was eloquently displayed in his lovely ëUû pro tvoje
jabl˙?kovy lÌceí, a lyrical moment in which he praises the beauty
of Jen?faís rosy cheeks. Laca then enters to an intervention by the
xylophone, a now evident fate-motif. Mr. Dvorskiís intensity in this scene
was breathtaking and his voice never wavered in its delivery or technical
precision as he took out a knife and asked himself how äteva would react to
the disfigurement of Jen?faís rosey cheeks. In an explosive flash of
percussion and soaring brass, Laca slices Jen?faís cheeks turning their
rosey colour to blood red and leaving the audience shocked and disgusted at
the dark reality that infatuation and jealousy can bestow.

Half a year later, we find the disfigured Jen?fa in her stepmotherís
house. The stage is minimal with only a white crib laying at a slanted 45
degree angle on the vast, empty stage. Kostelni?ka has secretly hidden
Jen?fa in order to conceal her pregnancy and the birth of ätevaís child,
telling everyone that Jen?fa went to work in Vienna. Kostelni?ka has
secretly summoned äteva and begs him to not abandon his child and marry
Jen?fa. It was here that Siljaís dramatic power fell over the opera like a
huge cloud of stardust. Her pleas and the sheer power of her voice penetrated
with every word, every syllable was inflected with purpose and a deliberant
threshold of anticipation: for the moment where the opera takes its fatal
turn. Ian Storey managed the scene with great attention to his characters
persona and, of course, refuses to marry Jen?fa and wants nothing to do with
the child. Silja responded remarkably to his negative statement and the
disintegration of her character begins to unfold in a downward and
accelerating spiral. In fact, Silja played the role so potently well that had
Jan·?ek seen her in it, he might have intended to rename the opera
ìKostelni?kaî instead. 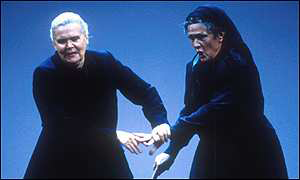 Laca also has learned that Jen?fa bore a child and insists on marrying
her. Kostelni?ka lies to him and tells him that the child has died, and thus
began the course of action that would lead to her desperate disintegration.
In a violent and astonishing scene that consisted only of a crib with the
sleeping infant, Anja Silja brought opera to its glorious definition. The
scene in which Kostelni?ka kills the infant was powerful and the voice was
obviously used up to this point in mediation. Truly one of the largest
voices, the strength of its sharp, cutting, silvery edge was more than
astonishing and one believed that Kostelni?ka had actually become part of
Silja, and not that Silja was merely playing a character. The audienceís
gasp at the on-stage murder ended the act after Kostelni?ka informs Jen?fa
that her son is dead.

The concertmaster of the Filarmonica della Scala, Daniele Pascoletti
effected a most wonderful interlude that was filled with a most weeping and
deeply sorrowful vibrating melody. His vibrato was full and shook with energy
to the highest tier of the opera house. The audience sighed when he finished
and there was a good moment of silence before Lothar Koenigs moved.

The third act brings us to the wedding of Jen?fa and Laca and as guests
begin to arrive Jen?faís grandmother blesses the couple. As Silja entered
the scene one could see the desperation and guilt weighing on her conscience
and her vocal entrances were filled with a solemn tinge of gloom. As
Kostelni?ka was going to bless the couple, shouting is heard from outside: a
dead child has been found beneath the ice. The child is brought in and Silja,
in a Callas-like manner, fell to her deepest and most pitiful state. The
moment where Jen?fa recognizes her son is moving simply due to the
magnificent orchestral writing however, Emily Mageeís response was not as
dramatic as it could have been; especially with Silja so carefully setting up
her own characters despair. This moment should see a reversal of situation,
where Jen?fa now has more power over Kostelni?ka however once the
confession of murder was made, Magee moved too quickly to ìforgivenessî
without really showing the furious anger that a mother would feel had her
child been murdered.

Silja, in full force until the end, remained the brimming light in this
production. All the portrayals were competent and brilliant, but she stood
above them all as was evidently expressed by the audience when Silja took her
bows and screams and yelps of ìBravaî echoed through the air and failed
to silence her voice that lingered still in the rafters.