Beginning with
the art formís pro-genitor, Periís LíEuridice written in 1600,
that list of sixty-five includes two great masterpieces but only one that has
never really left the worldís stages for a record 245 years.

That masterpiece is, of course, Gluckís version of the timeless tale,
ìOrphÈe et Eurydiceî, and in itself it has, over the years, been the
subject of re-writings for different voices, genders and vocal ranges for the
hero: from alto castrato (the original 1762 Italian version) through soprano
castrato to high tenor, and then to Berliozís renowned arrangement in 1859,
transposed by him for the great mezzo soprano of the time, Pauline Viardot.
This was based on Gluckís 1774 Paris version for ìhaute-contreî (high
tenor, not countertenor) and transposed up to Viardotís mezzo range.

A bewildering vocal history indeed; and, in the great tradition of this
operaís many vicissitudes, Glimmerglass Opera have achieved another two
firsts. This summerís new production by director Lillian Groag is using the
new B‰renreiter edition of the Viardot/Berlioz arrangement for the first
time in the USA and, perhaps more significantly, the title role is being sung
by the exciting young American male soprano Michael Maniaci, who recently
made waves at La Fenice with his performances of the title role in
Meyerbeerís ìIl crociato in Egittoî, followed closely by his
well-received Nireno in the Metís ìGiulio Cesareî.

Recent operatic history tells us that the demanding role of Orfeo has been
sung usually by females ó mezzo-sopranos and contraltos ó and only
recently have we seen a return to the male domain with CD recordings by
tenors David Hobson and Richard Croft, and live performances such as
countertenor David Danielsí magisterial performance in Mark Morrisís new
staging of the Italian version for alto at the Metropolitan Opera earlier
this year ó the first time a man has sung the role there. However, it is
doubtful if there has ever been a professional staging of the Berlioz
arrangement using a male soprano, and Glimmerglass are to be congratulated on
their desire to push boundaries and to continue the writing of this iconic
operaís life story.

When it came to the new staging, I wondered if director Lillian Groag felt
any pressure from the weight of history behind this opera? ìI feel that
with the great plays and operas in our canon everybody ìknowsî how they
should be done and yet no one agrees as to what that ìrightî way is ó
so instead I always ask why this play or opera right here and now?
In this opera I am looking at how the 4 characters ó OrphÈe, Eurydice,
líAmour and the Chorus, or community, are affected by the process of grief,
solace and return to life.î

For Groag, the hardest dramaturgical question was if Eurydice comes back
to life, then the truly iconic myth is dismantled and apparently loses all
meaning. However, in consultation with her costume designer Constance
Hoffman, she came to the conclusion that it came down to religion or, in this
case with the fatal look back, a failure of faith, the great sin in all
theologies. ìCalzabigiís (the librettist of the original Italian version)
and Gluckís worldview was Christian and the Christian theology is the only
one that has, to my knowledge, the possibility of redemption through
suffering. This links directly to Eurydiceís final resurrection ó through
OrphÈeís appalling suffering – which is gently remindful of the hope by
which Christianity contrived to thrive in the Western World. I am an atheist,
but I do see this as a profoundly Christian work.î

A hint as to Groagís surprising, and ironic conclusion to this
production can be found in her words above. She chooses to see the cycle of
Life, Nature and manís Redemption through Love as the key to this mythís
relevance today. The peasants cheerily celebrating yet another harvest in the
opening scene comes full circle as our reunited lovers survey the chilling
sight of their story starting over at the operaís conclusion.

The opera opens here in some hypothetical 18th century world of rural
bliss, with earth-toned costumed peasants set amongst the abandoned ruins of
some Greek temples. The reference to time passing is one that recurs more
than once. The Elysium Fields scene is another idea that works well: the
Enlightenmentís vision of the Good Life ó all arts, sciences and crafts
applied in a peaceful society where harmony was the goal ó was lit
gracefully by Robert Wierzel. However, although Groagís and her teamís
initiatives often succeed well enough visually, there are considerable
longueurs both here and in the opening scenes where singers and
actors were apparently left to their own devices to the detriment of the
cohesive whole. Luckily, John Conklinís evocative neo-classical sets and
Wierzelís subtle lighting helped hold the whole thing together and, with
Michael Maniaci drawing upon all his reserves of dramatic insight,
directorial gaps are largely disguised.

It is this insight, coupled with the growing ability to move both body and
voice into whatever realm is required by the text and music that makes
Maniaci such a convincing and exciting stage performer. Here, he is the
epitome of vulnerable young love ó wounded by grief and at the mercy of the
Gods. The voice, that of a true male soprano rather than countertenor using
falsetto, is strong, centred and controlled throughout the range, and is one
of todayís most interesting operatic phenomena, taking the high male
instrument another step further to mainstream operatic ìnormalityî. In
this work he is required to sing, full and true, from G below middle C right
up to soprano high C. It may not be his perfect vocal vehicle as it lies
lower than ideal for him, but with the exception of the two lowest notes
which take him beyond his current comfort zone, he operates with Èlan and
strong dramatic sense. His full-throated soprano can float above the staff
with ease, yet retains a difficult-to-describe but essential maleness about
it.

Despite his avowed preference for simplicity Gl¸ck permitted a certain
amount of ornamentation in his French revision; for instance in the
mesmerising extended aria for OrphÈe, ‘Amour, viens render a mon
‚me‘ that closes Act 1. Berliozís later arrangement for Viardot also
encompassed a hair-raising cadenza written by the singer herself. Maniaci
revels in the vocal challenge, displaying both technical brilliance and sense
of style, with some amazing vocal gymnastics that set the hall alight.

Balancing this bravura performance, in Act 2, when OrphÈe descends to
Hades we hear his heartfelt legato singing of OrphÈeís plea to the Furies,
‘Laissez-vous toucher par mes pleurs‘, which brought ‘the demigod of
music’ to life and made us believe in his mystical powers of persuasion. Here
the excellently demonic chorus rebut him time and again with their
ìNon!îs until at last they fall victim to his music. The iconic
tune ìJíai perdu mon Eurydiceî was elegantly yet powerfully
sung; no mistaking this heroís mental anguish as both singer and orchestra
upped the tempo in the final repeat bringing an almost desperate quality to
the aria.

Maniaciís colleagues were equally convincing and committed: the
sparkling soprano of Brenda Rae as LíAmour and the full vibrant singing of
Amanda Pabyan as Eurydice were nuanced and distinctively phrased. Pabyan in
particular was most affecting in her portrayal of the young woman too quick
to blame her lover for his apparent indifference. In her reading of the part,
we felt Eurydice to be the catalyst for disaster, rather than OrphÈe. Young
Caitlin Lynch made a good impression as the Happy Shade, as did the two
dancers, Trey Gillen and Katarzyna Skarpetowska, who led the choral movement
sequences eloquently in elegant choreography by Nicola Bowie. Julian Wachner
led the Glimmerglass Opera Orchestra in a fluent and pleasing reading of the
score.

A ìgenuine classical dramaî was what Gluck and Calzabigi originally
wanted the audiences to see, and you could argue that the physical and vocal
matching of role to character is crucial to make this happen. With a mezzo
soprano singing this Berlioz arrangement, that equivalence is lost ó would
it be going to far to suggest that at last we have the thought-provoking
realisation of Berliozís true musical intentions: the great mythic hero
sung in the mezzo soprano range by a man? Probably it is, but that doesnít
undermine or diminish what Michael Maniaci has achieved. Another small piece
of operatic history has been written here at Glimmerglass in 2007. 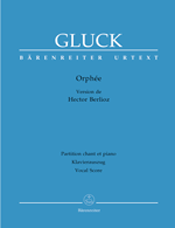