The Elora Festival, noted for the collaborative efforts of
many great performers and organizations opened its 2007 festival with
Elgarís magnificent creation. Noel Edison masterfully directed the Elora
Festival Singers, the Toronto Mendelssohn Choir, and the Elora Festival
Orchestra with brilliance, aesthetic dedication, and a tender yet strict
hand. The sensitivity he allotted the soloists is to be commended and his
understanding of the deeper meaning of this piece brilliantly shone in his
exquisite control of the orchestral fabric. The overture began with warm and
burnished hues, painfully weeping celli and well-balanced dark
ombra. The Elgarian timbres were specifically expressed by each
orchestral section, most specifically in the strings as they exemplified the
ethereal and transcendent space Elgar demanded in order to create the
vastness of his masterpiece. Edison paid intelligent heed to the dynamic
inflection and allowed the orchestra to create layered effects leading to
Gerontiusí beautiful entry cry of ìJesu, MariaóI am near to
death.î

Gerontius, sung with elegance and the purity of lyricism by Irish-Canadian
tenor, Michael Colvin, is a taxing role that requires an almost Verdian
thrust but also the most expansive sense of lyrical control. Colvinís
diction was brilliant and his use of text was especially moving. A free and
impressive upper register, the squillo of his tenore bruciato added
to the dramatic presence of Gerontius. Although this is a concert work,
Colvin was continually in character and indeed most musically presented.

Tenor, Michael Colvin was a sensitive and believable Gerontius.

The combined choruses blended well, with precise diction. Each section
represented an individual unit that contributed to the larger whole and there
was never a sense of unbalance. Edison led them beautifully toward their
inflection of ìOf all that makes me manÖ.and crueler still, a fierce and
restless fright begins to fill the mansion of my soul,î where Elgar at once
transforms the music by imbuing atonal suggestions, with turbulent and
exciting orchestration leading into an ethereal moment of relaxation.

The entrance of the priest was significant and wonderfully approached by
bass-baritone, Tyler Duncan. Perhaps the most impressive performer of the
group, his voice spun almost impeccably and was never pushed but floated on
the breath with precision and musical inflection. Impressive indeed for a
lower voice type to exude this type of elegance, there was never any
heaviness and if so it was created by timbre, not pushing or sometimes, what
I call, ìbarkingî baritones.

Tyler Duncan (bass-baritone) was the surprise of the evening.

A most memorable moment at the point where Gerontiusí words mimic those
of Christ in his last moments, ìInto Thy hands, O Lord, into Thy
handsÖî was so utterly moving that every hair on oneís head stood
completely erect. Duncanís expression of the Priests, ìGo forth in the
nameÖî was well-expressed as one of Elgarís most majestic melodies. 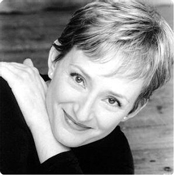 Part II offered a most expressive response to Part I and much of that is
owed to the performance of the Angel by mezzo-soprano, Kimberly Barber. Her
presence on-stage was riveting and even though she was not in costume one saw
her presence as the Angel, purely and physically. Her eyes never wavered in
their expressive depth and she captivated. Herís was the presence of calm
and salvation. Her voice blended liquidly with the chorus of Angelicals her
inflection and diction was precise. Her sound was never pushed and her rich
and luscious mezzo was used in a dramatic way, never singing just to project
but rather to express the meaning of the musical lines and the Angelís
important message. Her ìSoftly and Gently,î was truly one of the most
compassionate and hair-raising moments of the entire performance. As she
sang, ìIn my most loving arms I now enfold thee, and oíer the penal
waters, as they roll, I poise thee, and I lower thee, and hold thee,î she
moved many in the audience to tears. Barber enfolded us with her eloquence
and in the end one forgot that this was a singer performing a musical role,
but really Elgarís Angel.