After all there are two official recordings made in her prime and there are
the widely popular live-recordings made at the Met (Bergonzi-Gorr-Solti); one
even made the same year as this Rome-issue and it has the glorious voice of
Franco Corelli as a bonus in the tenor role. Still Price-fans will miss out
on a treat. She is in fabulous and firm voice: that unmistakably rich smoky
sound domineering the whole evening. By the mid-sixties some
Price-performances and even recordings were sometimes marred by her not being
able or not wanting to produce a homogenous sound. She sometimes sounded as
if she was experimenting with different kinds of vocal timbre so that several
voices could be heard in one performance, even in one aria; all of them
exciting but sometimes somewhat incompatible. She was not above growling
parts of her role too. Nothing of that is to be heard in this recording: just
an amazing outpouring of one of the most beautiful Verdian sounds to be heard
on the scene. Her second aria is truly astounding, capped with an ethereal
fine high C. The Roman house comes down and to its regret doesn’t get
an encore though not for lack of trying.

None of the other singers come near though they are all interesting and
didn’t have a big official recording career. Giorgio Lamberti was still
very young at the time, only three years into his career. He has the true
Italian sound and a vocal production that is best summed up as
‘trumpet’, reminding me of a legendary singer like Bernardo De
Muro. Lamberti doesn’t commit mortal vocal sins like heavy sobbing but
honesty compels me to write that he has no sense of the Verdian line, that he
is just belting out the notes without any insight into his role: witness his
lack of piano in the third act duet where he in has to take leave of Egypt.
In the house the voice was probably fine but the unremitting penetrating
sound tries the listener. Later on in his career he would have a better sense
of legato, and would even succeed in giving us some pianissimi (I often heard
him in the flesh; he still lives in my own Flanders) but these qualities were
still to come. Mirella Parutto has a fruity mezzo and is a fine and
convincing mezzo, as long as Price is not in the neighbourhood. Alas, the
American soprano’s middle voice is bigger and more colourful and one
hears Parutto pumping up the voice and straining for decibels. Mario Zanasi
in one of his rare recordings shows off a big agreeable voice, though still
singing in the verismo style in use at the Italian provincial houses. At
‘Dei Faraoni tu sei lo schiavo’ he clings interminably long to
his top note, milking the house for applause. Veteran conductor De Fabritiis
is fine most of the time, driving on his forces at a good Verdian speed. But
now and then, mostly in the cabalettas, he gets a dose of stimulating
substances (or he wants to show his singers who is the boss) and then he
hurries along at a breakneck speed which must have made the singers curse
him. 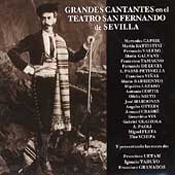 I’m sure vocal buffs of one of the most beautiful cities in Spain
(indeed in the whole of Europe) will be pleased with a worthy souvenir of
great historical singers who performed at their long lost beloved opera house
of San Fernando. The house was built in the 1840’s and was renowned for
the fine singers it attracted, especially just before and just after the
first world war. Then it was the long road downhill until its demolition in
1973. Happily for the Sevillanos, the refurbishment of the whole city due to
the world exhibition and the awful amount of money put into Spain by the
European Union once more gave them an opera house, the Teatro de la
Maestranza which opened in 1991. However I’m less sure that vocal buffs
outside Sevilla will take up this CD. Famous singers on this CD like Capsir,
Battistini, Tamagno, Lazaro, Cortis, Mardones, Fleta, Schipa etc. performed
at the San Fernando and are duly incluked but I doubt very much collectors
have waited for this CD to sample their voices.All of their recordings are to
be found in earlier compilations or on solo albums by Preiser, Romophone,
Bongiovanni or Spain’s Aria Recording. And several earlier issues are
better pitched; the De Lucia record is a case in question, a tone too high.
The redeeming feature of the CD is the introduction of some almost forgotten
Spanish singers like Utam, Tabuyo and Granados; not all on the same level as
their more famous countrymen and women but still good examples of their art
and times. Perhaps a full CD with those and other lesser known performers
would have found wider circulation among vocal record collectors. 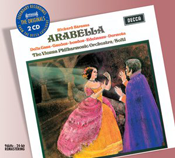 Arabella may be the opera suffering most from surtitles. I
remember an astonished lady, finally able to grasp every detail, who
commented during the pause of a Ghent performance: “but this is an
operetta.” Well, not quite. I doubt Messrs. Lehar and Kalman and
Romberg would have accepted some of the sillier aspects of the libretto like
the big guy falling in love with a portrait. But the structure of boy meets
girl (first act), boy and girl quarrel (second act) and boy and girl
nevertheless find happiness is indeed completely derived from Gypsy
Princess, Countess Maritza and Naughty Marietta. Georg
Solti however with his nervous and dramatic conducting makes the piece less
sentimental than it can be and he has at his disposal an astounding cast.
Most of them belong to the fabulous post-war ensemble of the Vienna State
opera and they are able to sing and to record everything between Mozart and
Lehar in a still unsurpassed way. The first thing that struck me was the
sound. Though recorded in early stereo in 1958 it is still amazingly warm and
fresh after half a century. Therefore nobody can discard this recording in
the series The Originals because it sounds old and worn.

Moreover all of the singers are at the height of their powers. Della
Casa’s voice in her signature role is shimmering with beauty, youth and
freshness. She is strong when she rejects the attentions of unwanted suitors;
she is warm and meltingly when she meets or speaks of ‘der
Richtige’ and she easily rides the orchestral climaxes. I cannot
imagine a better Zdenka than the boyish sound of Hilde Gueden which becomes
appropriately sensuous when she once more becomes a girl in love. Solti takes
care that she doesn’t linger on or scoop as she often did in her great
operetta recordings with less stern conductors. A third rediscovery is the
silvery coloratura of South-Africa’s most famous diva Mimi Coertse. She
is sparkling and technically proficient and her small role is a plea to Decca
to reissue her recitals. The male department is almost as strong. Anton
Dermota as Matteo is far better than the average Matteo. It is an ungrateful
role but Dermota with his experience of Mozart and his fine un-German
somewhat grainy timbre succeeds in creating a sympathetic suitor. And then
there is the singer whom many Americans (and others as well) will prefer as
Mandryka and whom I have doubts about. For my personal taste the
bass-baritone of George London is a bit too gruff, too throaty though he
brings warmth to it in the third act. He doesn’t hector as
Fischer-Dieskau does but there is less charm too. Mandryka may be rough from
time to time but he is a nobleman. For me London is the relatively less than
perfect singer in the recording but all in all, this budget issue is
unbelievably fine and convincing and maybe the best around.