I can recall, as a student, hearing a guest concert by the
Bavarian Radio Symphony in Chicago’s Orchestra Hall that opened with Carlos Kleiber leading
a thrilling reading of the overture to Weber’s “Der Freischütz.” (Every chestnut was once new to
those who hadn’t heard it before, right?)

After this “teaser,” I discovered that the whole opera was not only under-represented on
recordings at the time, but also that in America it was hardly ever seen at all, remaining more
talked about than performed. The reason for the neglect of this “first German opera” is perhaps
partly because of extended dialogue scenes which have trouble making their effect in cavernous
theatres; partly because of a pervading mysticism that can seem rather silly today (except maybe
to adherents of L. Ron Hubbard); and the notoriously difficult staging demands needed to
credibly bring off the rather clunky dramaturgy of the “Wolf’s Crag” scene (which can so easily
become so very cheesy).

More’s the pity that it is so rarely attempted, because I find much of the music sublime, that is, if
you have the singers to meet its challenges. And therein perhaps lies the real reason for its
neglect, since there are certainly other pieces that are dialogue heavy and dramatically
“challenging” that get regular mountings (“Die Zauberflöte” comes to mind). Weber’s opus not
only requires a hero and heroine with sizable, flexible heroic voices, but a bass-baritone with
chords of steel. All are called upon to maintain a mounting and plausible tension in the plentiful
dialogue.

Happily, in Germany, “Freischütz” is attempted much more often, though still not nearly with the
frequency of other mainstream masterpieces. In my experience the two separate Frankfurt
productions (one memorable only for a terrific Angela Denoke, the other for the goofiness of
having the hunters got-up as Hassidic Jews); the Achim Freyer version in Stuttgart (which others
liked much more than I); and even a well-meant staging in Seattle with (a slightly mis-cast)
Deborah Voigt; all left me admiring individual components but none adding up to a total
package. Until now. 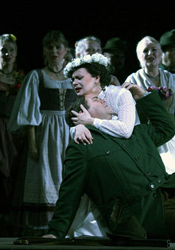 Cologne Opera has unveiled a new staging under the sure direction of Michael Heinicke, with a
pleasing traditional set and costume design by Jens Kilian, all quite beautifully lit by Hans
Toelstede. Just when you thought you may never see the like again, here is a “take” with –
*gasp* – actual pretty dirndls and proper-looking hunters, and a huge, gorgeous, many-branched
tree that fills the stage. In the first flush of fall, its leaves just turning, and beautifully lit, it
elicited gasps at curtain rise. “Agathe’s” room was a skeletal “wall” frame of 4 X 4’s, sparsely
furnished, through which the ever-present tree kept nature smack at the center of things.

Mr. Heinicke is an unfussy director who, blessedly, does not seem to need to impose much of
anything but common sense and strong stage pictures onto the piece. Almost everything and
everybody is what or who they are supposed to be. He has elicited sincere and affecting
performances from an excellent cast. However, perhaps out of obligation to do something
“modern,” there are one or two moments when “Freischütz” misfires.

Just after Max loses the initial shooting contest, the taunting chorus is suddenly joined by a sextet
of actual pit musicians, playing onstage in their concert attire, who join in tormenting him. Too,
there is a piece of business in which “Agathe” pretends to play a cello as accompaniment to
“Ännchen’s” aria. She is so clearly not playing it that it only distracts. And, in a
“what-does-that-mean?” moment, “Ännchen” places the flower arrangement on the lip of the
stage mid-Act I, next to the prompter’s box, where it remains until picked up again when the
flowers are required in Act II. I would hope that some consideration would be given to tweaking
these jarring bits, because for the rest of the evening I thought the staging had most everything
one could want.

The acting was not only believable, but for once the declamation was not of the phoney- baloney
Dudley Do-Right School of Operatic Elocution. “Samiel” (Joachim Berger) was a looming and
evil omni-presence who eerily appeared up in the crook of the tree, evaporated into the darkened
background at will, and attempted complete control over the turns-of-events, including a sinister
hovering during “Agathe’s” second act aria. The “Hermit” (Wilfried Staber) too had several
silent and mysterious appearances long in advance of his usual sung entrance late in Act II.

The fine young Croatian baritone Miljenko Turk (wonderful as “Billy Budd” last season) brought
beauty of tone and attractive demeanor to “Ottokar.” Katharin Leyhe’s “Ännchen” was not just
the usual chirpy kewpie doll, but had a tall, solid physique du role and brought some welcome
starch to her characterization, producing some lovely lyric singing in the bargain. Venerable bass
Ulrich Hielscher made a perfect fatherly “Kuno.” He was also feted at curtain call for his 30
years service with the company, by being made a “Kammersaenger.” 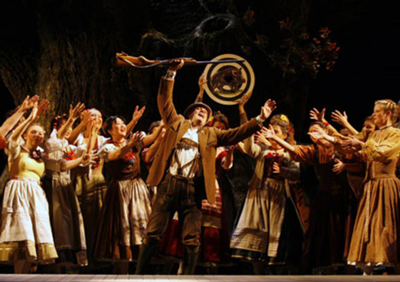 Lithuanian soprano Ausrine Stundyte had just the right amount of heft and metal in her pleasing
sound to make a winning Agathe. The hushed “Leise, leise” was beautifully internalized, and the
soaring stretto section delivered all the goods. She was totally committed to the Nervous Nellie
characterization that was asked of her. Indeed, I thought she was going to have a nervous
breakdown in several moments — at least I hope she was acting! (It was reminiscent of Judy in
her later years. . .)

Thomas Mohr was a splendid Max. While his firm lower-voiced singing displays some signs of
his former life as a baritone, the top rings true, his sense of line is commendable, his dramatic
commitment is effectively varied, and he poured out beautiful sound all night long in all
registers. We may have gotten spoiled, wishing every leading tenor could look like Juan Diego
Florez or William Burden, and that Mr. Mohr does not. But he exuded a genuine, conflicted
appeal nonetheless, albeit more in the Paul Giamatti mode.

The knockout performance this night came from the completely mesmerizing, thrillingly sung
“Kaspar” of Korean bass Samuel Yuon. His focused, steely tone cut through the orchestra with
ease, and his fiery melismatic work was right on the money. Moreover, he avoided every cliche
that has encumbered this role in the past with acting of amazing nuance. Even the sometimes
hokey asides of “Hilft, Samiel” hit their mark. His star turn in the “Wolf’s Crag” conjuring scene
was awesome. I should add that he was ably abetted by some very good, strobe-like lighting
effects which made the static tree actually seem to move about. 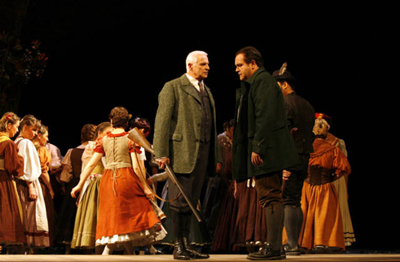 Memory having the ennobling effect that it does, I suppose nothing will ever completely
over-ride my first happy encounter with the opera’s overture those many years ago. But I found
Enrico Delamboye’s conducting to be very well-considered overall. He favored faster tempi than
some, with the bridesmaid’s tune and a couple of the choruses especially quick-paced. There
was a brief scrappy moment or two, like the opening bars of the overture’s first agitato and a
slight hiccup in the opening chorus. But even in the relatively dry acoustic of the Cologne house,
the Guerzenich Orchestra, chorus and cast responded to him with often expansive, always
persuasive Romantic music-making of a very high order.

If you, too, have longed for an encounter with the best of all possible performances of “Der
Freischütz,” well, this could very likely be the one you’ve been waiting for.