Philip Glass might well have prefaced his new opera
ìAppomattoxî with Wilfred Owenís words that Benjamin Britten chose to
introduce his War Requiem in 1962. For although ìAppomattox,î given its
world premiere at the San Francisco Opera here on October 5, is in no way a
pacifist pamphlet, it reaffirms the commitment to peace and to non-violence
that Glass first expressed in his Ghandi opera ìSatyagrahaî three decades
ago. Happily, however, there is nothing tendentious about ìAppomattox,î
an extended account of the 1865 meeting between Generals Ulysses S. Grant and
Robert E. Lee that seemingly ended the Civil War.

Seemingly ó for here the concern of Glass and his librettist, British
playwright and screenwriter Christopher Hampton, looks beyond Leeís
surrender of his army at Appomattox Court House to underscore the wounds of
that war that remain unhealed today, 150 years after the meeting of the two
generals. Glass counterpoints this historic event with the massacre of black
militia by Louisiana racists in 1873, the murder of civil rights worker
Jimmie Lee Jackson by Alabama State Troopers in 1965 and the hate-filled
words of Edgar Ray Killen, the Klan member convicted only in 2005 for his
role involved in the slaughter of a trio of civil rights workers 40 years
earlier. (Glassí ballad for Jackson ó the composer calls it ìa Bob Dylan
songî ó will undoubtedly have a life of its own beyond the opera.) ìWar
is always sorrowful. Never has so much blood been drained. Let this be the
last time,î sing the women who open ó and later close –
ìAppomattox.î

And Grant and Lee, portrayed here as men of dignity, moral stature and
generous spirit, are determined that the conflict that took over 600,000
lives should be the last war. ìHow we end the war today will still be felt
a hundred years from now,î Grant says, while Glassí music makes the
generalís words unmistakably ominous. Grant is sung by bass Andrew Shore,
Lee by bass baritone Dwayne Croft and Lincoln by bass Jeremy Galyon, low
voices all that underscore the sorrow of the tale as Glass tells it. Indeed,
it was the failure of that dream that accounts for the dark undertow of the
new opera, for the optimism that Ghandiís non-violence once inspired in
Glass is no longer present here.

In this ahistoric age Grant and Lee are little more than cardboard cutouts
on the distant horizon of fourth-grade history. Glass, however, brings them
to life as men of character and intellect and it is this that gives
ìAppomattoxî its aura of human warmth. Grant, although unkempt, scruffy
and fresh from battle, is not the bumpkin as which he is often portrayed, and
Lee is every inch a Southern gentleman and aristocrat. (The scene, in which
Lee is dressed on stage for the crucial meeting, recalls Don Giovanniís
preparation for the ìChampagneî aria.) The respect of the two men for
each other ó and their shared concern for their mission ó is genuine. And
their wives, along with Leeís daughter Agnes, Mrs. Lincoln and her
soothsaying seamstress, are late descendants of Euripidesí Trojan women
after the sack of their city, for they sense the ominous side of the
ìpeaceî about to be concluded. It is they who see the inhuman dimension
of the war and lament its consequences.

All five women are impressively sung by SFO Adler fellows Rhoslyn Jones,
Elza van den Heever, Ji Young Yang, Heidi Melton and Kendall Gladen.
Impressive also is the ability that Glass has now developed to make words
fully comprehensible ó even without resorting to the titles now traditional
everywhere. ìThe tessitura, or placement of the voice, will determine a lot
about comprehensibility,î the composer says. ìFor example, in English the
final consonants often indicate the meaning of a vowel. So if you go very
high with the voice it becomes difficult to understand the words. ìWhat
youíre looking for is a style of singing that is melodic but stays well
within the range of spoken voice.î

One thing most will learn from the opera is that Appomattox Court House is
not the seat of local government that the name commonly implies, but rather
an entire small town, in which the generals met in the living room of Wilmer
McLean. Designer Riccardo Hernandez has recreated this modest room ó complete
with period furniture ó for the second act of ìAppomattox.î Overall,
however, Hernandezí finest work is the curtain of glass and steel that the
audience sees upon entering the War Memorial Opera House for this production.
It is ó literally ó a cutting-edge expression of the nature of war. On the
other hand, for the destruction of Richmond he takes his cues from Cecil B.
DeMille and detracts from Glassí score with realistic artillery and
fireworks.

ìAppomattoxî is in a sense Glass own celebration of his 70th birthday,
which took place in January. And in a superbly informative interview with his
team in the SFO program book, he makes note of the distance he has traveled
since the 1989 production of ìSatyagrahaî here. ìIt was the very night
of the crackdown on the Tiananmen Square protests in China,î he recalls.
ìAnd Iíve moved away from the optimism you see in my early works.î He
states that the world has become a threatening place and laments that such
statesmen as Grant and Lee have been replaced today by mere politicians. And
Grassí style has changed markedly from the repetitive patterns of his
nascent minimalism.

ìAppomattoxî is at times richly melodic, and orchestral interludes –
such as the music that marks the destruction of Richmond ó is highly dramatic
in its descriptive force. This is not to say that this is a perfect work; the
chorus of black Union soldiers, for example, should be shortened. To dwell on
shortcomings, however, is to overlook the grand achievement of
ìAppomattoxî and to fail to be moved by its absolute integrity and the
intensity of its message. 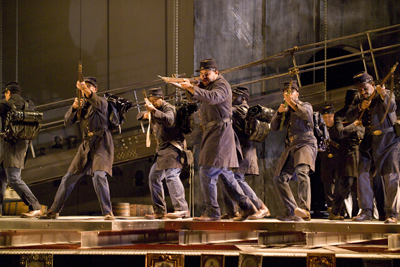 Philip Glass has been his own man since the beginning, and his concern for
the war between the States dates back to ìCIVIL warS,î, his collaboration
with Robert Wilson for 1984 Los Angeles Olympics. To measure him by the ruler
defined by Mozart ignores the originality of a man who has contributed to
every known genre and ó in his collaborations with poet Allen Ginsberg and
his operas built upon Jean Cocteau films, to mention only two examples ó he
has created some of his own. And, as librettist Woodruff observes, in
ìAppomattoxî Glass has dealt meaningfully with a chapter in history that
ìstill sits in the middle of the psyche of the American people in an iconic
way; the resonance between that moment in history and the succeeding moments
of violence and violation of that pact.î

Originally a commission for the Houston Grand Opera, David Gockley brought
ìAppomattoxî with him when he became general director of the San
Francisco Opera in 2006. It is thus his first SFO commission. Although there
are at present no plans for staging ìAppomattoxî elsewhere, the work
seems destined for great popularity. Indeed, it seems safe to say that with
the new work Philip Glass has created an operatic companion piece to ìGone
with the Wind.î