Having collaborated in the past with choreographers
including Mark Morris, the company is now two thirds of the way through a
Monteverdi opera cycle in collaboration with Chinese-American director Chen
Shi-Zheng, the Orange Blossom Dance Company from Indonesia, and the
early-music specialist conductor Laurence Cummings. A precedent was set by
the opening opera of the cycle in spring 2005 ó an Orfeo of
spectacularly hypnotic, fluid beauty.

The company dÈbut of rising British singer Kate Royal as Poppea was an
additional selling point for this second opera in the cycle. She’s a
glamorous singer, with a polished sultriness in her low-lying soprano, but
the stage directions prevented her from painting a convincing character
portrait; she spent much of the first act perched high on the deck of
Neroneís luxury yacht (yes, there was a surreal marine theme to the
production, with much of the action apparently taking place underwater) which
made her untouchable and aloof. Projected images on the backdrop reinforced
this idea; she was an icon, virtually a graven image to be worshipped.
Despite Royalís natural poise and elegance, there was little sense of
Poppeaís earthy sexiness nor of her calculating ambition.

Lucy Crowe (Drusilla) and Robert Lloyd (Seneca) had an easier time of it,
and managed to make something believable of their roles; Christopher
Gillettís Arnalta looked (intentionally) ridiculous but sang very
beautifully at times.

Otherwise, the cast was a bit weak and underpowered. It is, perhaps,
unfair to blame the singers for this; Monteverdi operas were not designed for
a space the size of the Coliseum. Tim Mead’s Ottone started off with that
slightly yelpy sound which countertenors get when they over-project (though
he sorted this out by the second half). Anna Grevelius, as Nerone, sang very
sweetly but didn’t project any masculinity either vocally or physically –
certainly not enough to convince as an egomaniacal ruler. Doreen Curranís
Ottavia had considerable vocal presence, but her characterisation wasnít
aided by the fact that the director had her languishing on top of what looked
like a large white pumpkin at the bottom of the sea. Indeed, the costumes and
props seemed incidental to the opera, and at times even a hindrance.
Sometimes it was more like a fashion show, with wacky structured
haute-couture costumes which made me wonder whether we’d accidentally strayed
into the Zandra Rhodes-designed Aida a few weeks early. 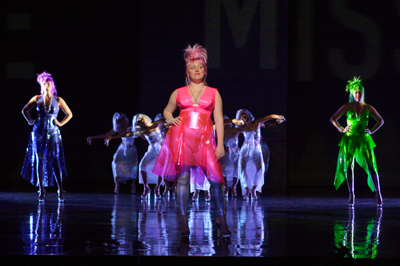 The Indonesian dance troupe were usually incidental to ó indeed, often
distracting from ó the action rather than providing the unifying,
mesmerising presence they supplied to last yearís wonderful Orfeo.
The production did have moments of real beauty – like the dancers in the
dragonfly costumes rising slowly into the air during “Pur ti miro”. And there
was great beauty in the music ó is it even possible not to make this score
beautiful? Laurence Cummings really understands Monteverdian line and seemed
to have taken considerable trouble to share this with the cast.

But compared with Orfeo, with its sense of “flow” and constantly
visually-arresting use of colour and movement, this Poppea staging
was scrappy and disappointing. In truth, the biggest problems were the
failure to communicate the humanity of the characters, and the fundamental
sense of division between the musical performance and the visual spectacle.
Chen Shi-Zheng has shown himself to be yet another director who allows his
personal vision for a production to take priority over the work being
performed. ENO still has him lined up to direct Il ritorno
díUlisse and I really hope he engages more with that than he seems to
have done with Poppea.