The company currently
seems obsessed with ‘hooking’ a new audience, while giving little thought to delivering a
consistent standard of meaningful theatrical output which might encourage this audience to stay
and explore the operatic medium further.

The ‘hook’ for Jo Davies’s new production of Aida (in collaboration with the opera companies of
Houston and Oslo) was the prospect of sets and costumes by the iconic British designer Zandra
Rhodes – hence the dress-up doll – and it was Rhodes’s name which dominated the publicity
material.

Rhodes’s creation is a riot of colour in stylised, exaggerated versions of authentic Ancient
Egyptian designs. The men’s chorus sport voluminous gold skirts and bald-caps painted with
turquoise zigzags; Amneris is entertained by orange-clad child dancers in a room with intricate
wing-patterned windows, and Radamès makes his Act 2 triumphal entrance on a fabulous
turquoise-and-gold elephant puppet amid a shower of gold. These are the garish ceremonial
colours of the Egyptian armies; the Ethiopians have earthier colours, browns and burnt reds and
yellows. Diagonally-hung scenic draperies slide back and forth to create pyramid-shaped spaces;
the final scene is highly effective as a triangular space closes in on Aida and Radamès.

Crucially, behind the zany turquoise headdresses and lavish visuals, Jo Davies has created a
straightforward, ultra-traditional reading of Verdi’s drama which focuses on the central love
triangle and Aida’s internal struggle. It is refreshingly gimmick-free and invites the audience to
care about the characters. Furthermore, the singing is terrific.

Two singers are particularly outstanding; Claire Rutter, who sings the title role for the first time
and does so with total commitment and unfailingly lovely tone, and Iain Paterson, also in his role
début as Amonasro, a former ENO Young Artist whose bass-baritone is now impressively
refined and compelling (his future engagements include Gunther at the Met). 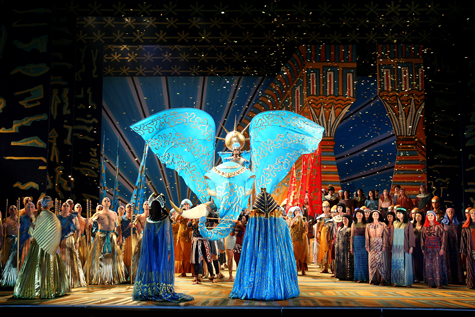 Tenor John Hudson may be short on vocal ‘edge’ but he sings Radamès with power in the big
moments at the end of Act 1 and the Nile Scene, and remarkable sensitivity in the quieter
passages, including a proper diminuendo on the final B-flat of ‘Celeste Aida’. Jane Dutton’s
Amneris is vocally capable, but it’s her characterisation that would really benefit from more
depth. For the first two acts at least, she comes across as little more than a smug,
two-dimensional cartoon villain; there’s little evidence of the personal pain behind her
victimisation of Aida. After the Nile Scene, suddenly there’s some depth and real drama. (One
weakness of the staging as a whole, in fact, is that it doesn’t really start to take itself seriously
until the second half.)

Add into the mix the two distinguished basses – Gwynne Howell as the King of Egypt and
Brindley Sherratt as Ramfis – and the cast is one of which any top-rank international house
would be proud. In the pit, conductor Edward Gardner makes delicate work of the score’s soft
opening and the calm reverence of the ‘Possente Ptha’ scene, but pulls the stops out for the
warmongering in Act 1 and the big stuff of Act 2.

For once, the formula seems to be right. Attract the punters with a well-known opera title and a
big-name designer, and keep them entertained with first-class music making, a visual spectacle,
and a production which acknowledges that the intimate stuff is most important of all. ENO
should treat this as a salutary lesson.