But the company is more than
happy to recycle selections from the recordings the two artists made for the
label and issue them in two-CD sets in their “Portrait” series.

The slim booklets for each set feature a cover photograph of the artist,
with both clutching themselves and turning an enigmatic, suggestive smile to
the camera. After the track listing comes a short bio in three languages, and
then a page of all the producers, engineers, and recording locales of the
original releases. No texts, of course.

As a retrospective of each singer’s early maturity, the Hvorostovsky
Portrait has an edge over Borodina’s. CD 1 of the baritone’s set has
three Verdi arias from a recording with Valery Gergiev, and then 5 bel canto
selections with Ion Marin. Then Gergiev returns, leading the Rotterdam
Philharmonic in providing Hvorostovsky’s support for the big Tchaikovsky
baritone arias from Eugene Onegin and Pique Dame. The Kirov
plays for Gergiev in the final 5 tracks of more Russian repertory
(Tchaikovsky, Rubinstein, and Rimsky-Korsakov).

This gives the listener an excellent taste of Hvorostovsky’s operatic
skills, his gorgeous tone and enviable breath control on display in every
selection. Some find the voice almost too pretty for Verdi, but surely the
baritone’s Rodrigo from Don Carlo is without peer on the contemporary opera
scene. The Largo al factotum is high-spirited, even without that
traditional last falsetto cry of “Feeee-ga-ro.” In the Russian pieces, the
years have only added to the artist’s depth of characterization, though these
early 1990’s recordings certainly satisfy on the sheer basis of vocal
splendour. 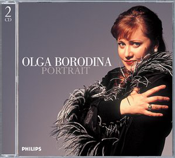 Disc two begins with some “antiche arien,” including Handel’s Ombra
mai fu. As Borodina also sings this on her set, this allows for a point
of comparison. The mezzo lets her gorgeous voice fill out the melodic line,
lusciously but ostentatiously. Hvorostovsky somehow seems to let his voice
support the melody’s innate loveliness, rather than compete with it, and his
version is the lovelier for it. Some Tchaikovsky and Rachmaninoff songs
follow, with piano accompaniment. An excellent recitalist, Hvorostovsky
manages the tricky feat of making a recording feel like an intimate
encounter. The dramatic conclusion of the set comes with Gergiev again
leading the Kirov as the baritone sings the Shostakovich orchestration of
Moussorgsky’s “Songs and Dances of Death.” Hvorostovsky’s is not the darkest
of voices, and he doesn’t try to force an ugly edge. Instead, the very
silkiness of his delivery plays against the text in a way that presents a
sinister effect. There are more potent versions, but the music is very well
served.

Borodina’s set does more skipping around in musical eras. It starts with
Dalila’s big aria, then two from Rossini’s Rosina. The Ombra mai fu
is followed by Preziosilla’s numbers from the Gergiev La Forza del
Destino set. Instead of showing off the singer’s versatility,
unfortunately, this arrangement tends to emphasize the sameness of her
artistic approach, which basically amounts to a reliance on the beauty of her
instrument over characterization. Yes, she can sing Ponchielli, and Berlioz,
and Purcell – but the singing doesn’t reflect much of an awareness that these
are very different composers.

The second disc, thankfully, is dedicated to Russian repertory (except for
three quite charming songs from Falla’s Siete canciones populares
espaÒolas. Whether in song or opera, Borodina in her native tongue has
a life and a sensitivity in her singing less apparent in other languages.
Here the undeniable lusciousness of her instrument is partnered with a
detailed interpretative stance, and the greatness of her artistry is
undeniable. The disc ends with a luscious performance of a Psalm from
Rachmaninoff’s Vespers. Even the famously glum Rachmaninoff would
have smiled at the beauty here.

The many original releases that both these compilations came from would be
very hard to track down these days, so fans of either singer who missed out
on those discs should look for these “Portrait” CDs.