And
happily, unlike Watersí film, this production scored all the right points
for compelling dramatic relevancy.

The worldís most famous libertine (pace, Bill Clinton) is after all a
sexual compulsive in need of a Twelve Step Program. Director Robert
Tannenbaum has chosen to place heavy (though not heavy-handed) emphasis on
the title characterís wanton and unfulfilling abuses of his prodigious
sexual powers. Mr. Tannenbaum can always be counted on for a fresh and
inventive, yet honest interpretation. True, he can perpetrate the odd moment
here and there that doesnít quite click; but mostly I find that he excels
at telling the story, presenting the character relationships that the authors
created, and staying out of the way of the music.

Indeed, the only character in this modern dress, minimalist production
that is not presented as a sexually active being with a gnawing appetite, is
the ìCommendatoreî The ìDonî first appears in pantomime during the
overture, disguised as a cleric who seduces ìAnnaî from her evening
prayers in the chapel. She capitulates to his attentions quite willingly and
is soon pinned against the wall, writhing in increasingly pleasurable
foreplay until interrupted by daddy.

ìElviraî is presented as compulsive about all things: she reveals, and
consumes a chocolate cake during ìMi tradiî; tipples wine immodestly from
a bottle through much of the rest; and lengthily swaps some serious spit with
a ìLeporelloî who appears quite happy to have his tonsils cleaned by his
masterís sloppy seconds.

ìOttavio,î usually a cipher, was here a troubled divinity student who
was very receptive to having an intimacy-starved ìAnnaî remove his Roman
collar, and tear his cassock open to nuzzle his heaving bare chest during the
allegro section of ìNon mi dir.î

Peter Wernerís wholly effective modern setting consisted of a series of
high walls joined at disparate angles, creating a central hallway of sorts,
mounted on a turntable, and trimmed in with walls as matching legs. The
neutral textured ecru was an ideal surface upon which to project endless
lines of countless names of ìGiovanniísî conquests, the image varying
in intensity and legibility from scene to scene. No one was credited with the
wonderful lighting design which alternately used isolated areas and
spotlights, and mood- enhancing washes with excellent results. 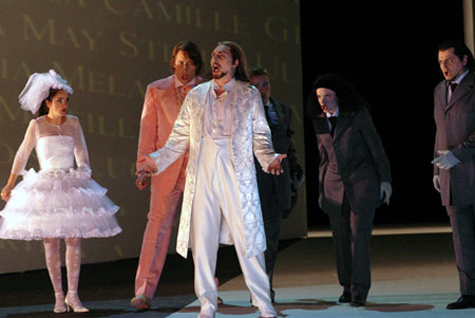 The whole scenic structure rotated and spun with judicious directorial
thought and attention. Only once did it seem to create unwanted dead space
while we waited for a new positioning. In fact, the set facilitated many
successful groupings and offered opportunities for meaningful dramatic
reinforcement, none more so than the attempted party rape of ìZerlina.î
The deed itself was happening on stage right with the roiling mob stage left,
all the while separated from each other by a jutting piece of wall that came
right to the stageís edge. This was undoubtedly the most chilling and
suspenseful staging of this moment I have yet encountered.

Later, at the ìDonísî final fateful party, he is portrayed much as
the dissolute, impotent Jack Nicholson at the end of ìCarnal Knowledge,î
sitting in his designer leather easy chair, distractedly clicking his remote
and viewing his own Mozartean ìBall Busters on Paradeî slide show, with
photo after photo of past conquests flashing on the wall. 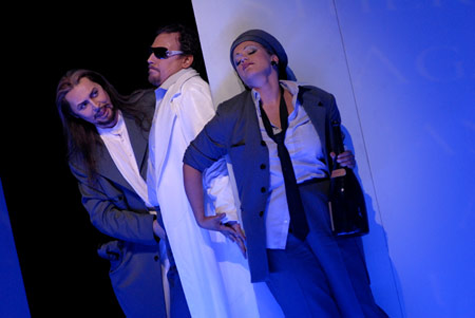 When the ìCommendatoreî finally nabs his arm in a death grip, hell
arrives in the form of a sex-guilt-induced hallucination of these same images
that now flood the stage, disorienting the audience with strobe-like rhythmic
interweaving that make the ìDonî appear to be floating in a visual hell
of his own creation. This was emotion-laden, first-rate stagecraft.

Less effective was the closing sextet. The set did not quite turn in time
for them to be singing full front at its opening, and all were sharing
breakfast at a Victorian dining table, ìMasettoî and ìZerlinaî with
baby carriage in tow and (judging from ìZerlinaísî Britney Spears bare
bulging belly) another tot on the way. I guess they were all being hosted by
the nun-garbed ìElvira,î now in her convent. It was a bit of a
miscalculated visual, especially after an evening of utmost clarity.

For Robert Tannenbaum knows how to direct singing actors. He knows how to
position them so they can be heard to maximum effect. He knows how to draw
focus to the soloist when there are others on stage. He knows how to
illuminate their relationships and enhance our appreciation of the piece.
This is a director serious about serving the work at hand, and hey, I can
live with an odd, well-intended dining table or two. Tannenbaum scores a
significant achievement with memorably inventive work on this evergreen
standard.

But no amount of fine design or direction could have saved indifferent
music-making, and here, too, Karlsruhe came up with the goods in spades. At
the center of it all, the fine (guest) international baritone Bo Skovhus was
virile, potent, mesmerizing, and troubled; singing all the while with beauty
of tone, dramatic fire, and star power. His effervescent, articulate
ìChampagne Ariaî was as fine as I have ever heard.

One non-musical note about our star: the production should consider losing
the long straight-haired wig he is made to wear until the final scene, when
he is blessedly ìau naturel.î It may be meant to convey a rock star
image, but ends up looking a bit like Ali McGraw on a bad hair day. 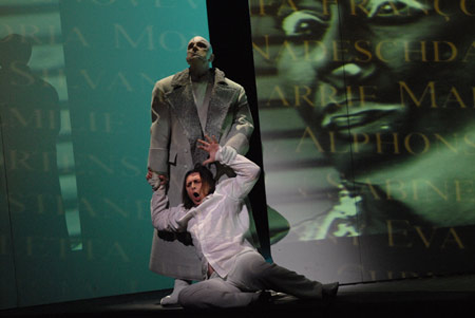 Guest bass Christophe Felís rather stock ìLeporelloî was well-served
by a big, grainy voice of pleasing timbre, and ample projection. It must be
said that his generally good comic timing lacked in subtlety, and his singing
was marked by several patches of casual acquaintance with the downbeat. And
upbeat. Or any beat.

ìMasettoî found a pleasing physical/dramatic embodiment in Mika Kares,
who produced a suave and rolling bass-baritone. His Partner in Peasantry was
the delightful, petite Diana Tomsche as ìZerlina.î Her clear, free lyric
voice wanted a bit more fullness in ìLa ci darem,î especially since she
otherwise brought a delectable tone and substantial vocal presence to the
stage.

Another guest star, Carmela Remigio offered us a beautiful, pointed,
well-schooled soprano of ample size; always in command of ìAnnaísî
heroic music; wedded to a good realization of the roleís dramatic and
directorial demands. While this was a very credible and enjoyable turn, I
hope I may be forgiven if I say that she is not just yet in a league with my
ìAnnaís-of-Christmas-Pastî including Leontyne Price, Carol Vaness, and
Joan Sutherland. However, time and further experience could certainly bring
her into that company, as she already has a lovely presence and considerable
gifts. (She has recorded the role.)

ìElviraî was a bit of a mixed blessing in Christina Niessenís
competent hands. Hers is a unique, metallic sound that aptly suited the
shrewish aspects of this role as she unrelentingly pursued her once and (she
wishes!) future prey. I found that although she was always completely in
service of the role and the directorís concept, her technique did not wear
especially well on me, seeming almost strident by operaís end. Perhaps some
modulating of her heated dramatic zeal would correct some of this
impression.

In his small role, Ulrich Schneider was an imposing, dark- hued
ìCommendatore.î The Badisches Staatskapelle played with stylish vitality
and solid commitment under the sure hand of Jochem Hochstenbach.

This ìDon Giovanniî strikes a welcome balance between
ìtraditionalî and ìwhat-was-that-about?î and clearly pleased its
public. The raw power of the libido-driven action, coupled with persuasive
musical results made a great case for Mozartís masterpiece. Not only would
Wolfgang have approved, but he assuredly would also have giddily joined in
this pleasurable evening of ìgoiní sexiní.î