This label focuses on Gruberova, and has
now reached the stage of issuing the “Edita Gruberova Edition,” which seems to be themed
collections of highlights from previous recordings.

Edition 3, Siente Me, bears the subtitle “popular avenues.” Some of the chestnuts here are pieces
one would expect from Gruberova, including a flamboyant “Bell Song” from Delibes’s Lakme
and the high-spirited “Ah! Je veux vivre” from Gounod’s Romeo et Juliette. Somewhat less
expectedly, Gruberova does very well by two of Puccini’s greatest hits for soprano, “O mio
babbino caro” and “Ch’il bel sogno di Doretta.” The latter, exquisite performance makes one
wonder if Gruberova ever attempted La Rondine on stage.

Although by no means a native speaker of English, Gruberova does a decent job with Bernstein’s
“Glitter and be gay.” The listener won’t catch very word, but she seems to get the humor and
certainly has the technique to deal easily with the challenges the music poses. This disc ends with
two pieces of Euro-pop composed by one Gunnar Graewert. On one hand, for many people these
synth-heavy but lightweight songs will seem out of place for Gruberova. On the other hand, she
doesn’t sound so nearly out of her element as, for example, Kiri te Kanawa does on the “Kiri and
Karl” CD. In fact, Gruberova’s ethereal tone is well used by the producer, especially in “Ecco la
primevera.” Think of it as high-class, up-tempo Enya. The booklet has no texts, and only a scanty
note in German or English, only slightly more comprehensible in the latter than in the former to
this non-German speaker. 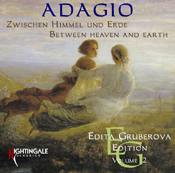 The booklet for edition 2, “Adagio: Between heaven and earth,” has no notes at all, just track
listings, photos of album covers, and production details on the original recordings. It’s a beautiful
collection, however, although the point of the title (let alone the tacky cover art) proves elusive.
Anything with a vaguely “spiritual” bent seems to have qualified, including an absolutely
luscious run-through of Lakme’s duet with Mallika (sung by Natela Nicoli). The opening track is
a rare vocalise from Saint-Saens, “Le Rossignol et la rose,” allowing Gruberova to put on a
master class in sustained breath control and floating notes. A series of lieder duets with Vesselina
Kasarova makes one want to hunt down the complete recording they came from. All in all, the
collection is much more heavenly than earthy. 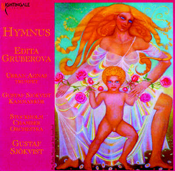 Perhaps on some other disc of the “Edita Gruberova Edition” we will find tracks from Hymnus, a
collection of pieces from Bach, Handel, and Mozart. Strangely, Gruberova does not seem at
home in this repertory, although it provides some opportunity for her skill at quick runs. Here the
light color of her instrument blanches, the high notes pop out a bit too ostentatiously. There are
fine moments, to be sure, but even in Mozart’s “Exsultate Jubilate,” Gruberova sings as if
disconnected, even disinterested. 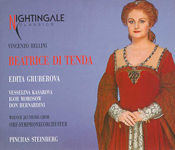 She is much more at home in Bellini, and Nightingale has released many a complete set of her in
his operas. The Beatrice di Tenda comes from 1992, recorded live for Österreichen Rundfunks.
This time Nightingale provides a full booklet, with a libretto in German and English. Niel
Rishoi’s fine essay argues for a reconsideration of the opera’s merits, and the music is indeed as
impassioned as in the more performed Norma or I Puritani. However, even those operas appear
less often than they deserve, probably due to the difficulty in gathering casts adequate to the
demands of true bel canto style. So the chances that Beatrice Di Tenda will be staged more often
in the world’s opera houses seems slight.

The story is a romantic rectangle, if the reader will allow. Count Filippo would like to be rid of
his wife Beatrice, so he can be with his beloved Agnese. However, Agnese actually loves
Orombello more, but he has his heart set on…Beatrice! When the Count finds Orombello and
Beatrice together, he accuses them of treason, and the opera ends with Beatrice’s noble ascent of
the scaffold. Actually, the story is less incredible than that of the more frequently performed La
Sonnambula. If the score, though of uniform quality, had a couple of arias with more distinctive
melodic profiles, perhaps the opera would be better known.

Nightingale’s cast is capable, with a young Vesselina Kasarova as Agnese, Igor Morosow
growling away as the bitter Filippo, and Don Bernardini coping well with the usual stringent
demands of Bellini’s writing for tenor. Gruberova, the star, is not in the very best of voice, with
high notes in particular sounding more effortful than usual, and not always perfectly on pitch.
Pinchas Steinberg’s leadership of the ORF-Symphonieorchester provides fine support. Her fans
at the live recording, it should be noted, reward her with vociferous enthusiasm.

A DVD of the opera, also with Gruberova, was available at one time; it may be difficult to track
down at this time. A diligent hunt may also produce a copy of the studio recording Richard
Bonynge and Joan Sutherland brought forth.

Gruberova fans will want all of her releases, surely. For those with favorable impressions of the
singer but less devotion, the Adagio compilation earns a strong recommendation.