He was a bad man and he got
what he deserved!” But did Mozart really see it this way? Could he have written the music that
he did for this man without a strong sense of identification – without a sympathy rooted in his
own experience of life?

In the staging of “Don Giovanni” at the Washington National Opera this fall, John Pascoe might
not answer this question, but it’s clear that he — both director and designer of the handsome
production — hardly takes a Bible-belt view of the Don and his fate. But what does Pascoe do to
make this an unusually absorbing staging? And does he get this all-time Casanova off the red-hot
spikes on which he is impaled on stage by Satan’s minions? (Remember that in “Man and
Superman” Shaw sends Giovanni to Heaven, where he is bored by all the lily-white Goodness
and spends his days lounging in Hell, where life is far more interesting.)

All of us — women and men alike — want to be Giovanni or be seduced by him, Pascoe writes,
outlining his approach to the opera. And in comments on the WNO production, the seeds of
which were sown in a 2003 staging while the company was “in exile” in Constitution Hall during
the renovation of its Kennedy Center home, Pascoe points to the distinction between the Don as
seducer and the Don as a demonic individual. “He should not be a demon figure,” the director
writes. “He has to be an incredibly seductive figure . . . looking like a magnificent sexually
driven animal in the first act.”

But losing oneself in interpretative speculation at this point overlooks the overwhelming
excellence of the performance seen on November 13. “Giovanni” is a long opera of many scenes
that easily become piecemeal in lesser hands. Pascoe picks up on the dramatic drive of the score
in the opening D Minor chords of the overture and sustains this throughout both acts of the opera
until the tension is broken by the epilogue the follows the Don’s demise.

One sits for three hours as if facing a headwind that blows with passionate velocity from stage
and orchestra pit, where WNO assistant conductor Israel Gursky made his main-stage debut as a
man closely attune to Pascoe’s concept of the work. (WNO general director Placido Domingo
had conducted the first six of eight “Giovanni” performances.)

Although Pascoe opts for an essentially timeless approach in sets and costumes, references to
Franco’s Spain place the story in an era of turbulence and repression. And his designs bring to
the Kennedy Center stage a sense of cosmic space that enhances the universality of the story. The
dark clouds that gather at the end of Leporello’s “catalogue” aria — to cite one example —
clearly foretell the Don’s doom.

Uruguayan bass Erwin Schrott, a leading Don of the day, was replaced in final performances of
the run by Ildar Abdrazakov, who had sung Leporello to Schrott’s Don. His older brother Askar
then took over the servant role. (Although Askar is the elder by seven years, the sibling
collaboration recalls Peter Sellars’ 1991 casting of identical twins Herbert and Eugene Parry in
these roles.) 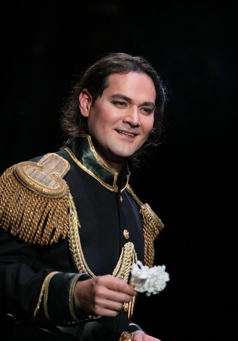 The brothers, born in Bashkortostan, have those huge, wonderfully rich and resonant voices
unique to Russian singers and are perfectly paired in these roles. Ildar has the dash and daring of
an ideal Don, whom he makes a study in internal combustion set to music. Askar stresses
Leporello’s awareness that he is hopelessly caught in the web of his master’s desires. (Ildar, by the way, is married to top Russian mezzo Olga Borodina.)

Although Mozart buffs have long argued whether Donna Anna or Donna Elvira is the more
important woman in this drama, for Pascoe Elvira is the frontrunner, and he supports his view by
bringing her on stage with a baby in arms. “I want the audience to feel as though Don Giovanni
and Donna Elvira are a lion and lioness who have been apart from each other,” the director states,
“and who are in love with each other in a very deep and passionate manner.” In other words, had
the Don stood still long enough to realize it, Elvira was the woman who might have sated his
appetite.

And German soprano Anja Kampe, WNO’s resident Sieglinde, has the strength of voice and
personality to make her the equal of the Don. As an elegant Anna, on the other hand, Canada’s
Erin Wall is fired by an unrelenting desire for revenge, and Pascoe’s costumes give her a feline
ferocity — with claws extended. And in Canadian tenor John Tessler she has at her side an
Ottavio far removed from the Milquetoast figure that her fiancé commonly is. One is grateful that
both his arias are included in the staging.

Amanda Squitieriz and James Shaffran are charmingly innocent as peasants Zerlina and Masetto.
And as the Commendatore Morris Robinson is a chilling basso profundo in the cemetery scene.
Denmark’s pre-existentialist Søren Kierkegaard (1813-1855) was among the first to look beneath
the surface of “Don Giovanni,” seeing there the parallels between the title figure and Goethe’s
Faust. In “Either/Or” the “melancholy Dane,” a theologian by training, distinguishes between the
“sensuous genius” of the Don and the “intellectual genius” of Goethe’s hero. 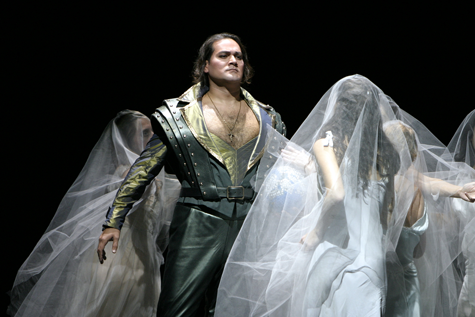 And the suggestion is clear that while Faust’s quest is for a single incarnation of “the eternally
feminine” — “das Ewig-Weibliche,” the Don seeks rather to compose a mosaic, in which an
infinite number of women merge. Although Goethe (1749-1832) lived both long before and long
after Mozart, they were contemporaries. Indeed, Goethe repeatedly staged “The Magic Flute” at
his Weimar theater and even attempted to write a sequel to the story. And when approached by
composers eager to make an opera of “Faust,” he waved them off, saying that only “the
composer of ‘Don Giovanni’” would be equal to that task.

British-born Pascoe, a man with 30 years experience in opera, has brought a “Giovanni” both
beautiful and musically fulfilling to Washington National Opera. And he would agree, one
thinks, with Kierkegaard’s conclusion that if he were ever to understand Mozart, he would know
that he is mad, for no one will ever completely understand Mozart.