It was certainly an era when the artist’s use of the
voice to create character and drama were of the highest value, but the operas that survive (very
few half a century ago, quite a few now), though the melodies are ravishing, call for singers who
can bring them to life emotionally — they are never just vocal exercises for songbirds.

In the midst of that era, in 1831, Bellini’s Norma was created — by Giuditta Pasta, one of the
most renowned singing actresses of her time, who had created Donizetti’s raging Anna Bolena
and Bellini’s pathetic Sonnambula in the two years before Norma. And Norma is a curiosity in its
era (more apparently now than at the time, when classical tragedies were often being turned into
operas), calling as it does on the outsize character and emotional spectrum of a classical heroine:
a Medea not just angry but deeply in love, a Phaedra who must also be a hypocritical politician
and an edgy friend, a Clytemnestra wracked by jealousy and maternal misgiving.

Sopranos used to have a hearty respect for Norma — they didn’t take it on unless they were sure.
Canny divas like Flagstad, Tebaldi and Price turned it down when management offered. Fewer
ladies sang the role in eighty years at the Old Met than have attempted it in a mere forty at the
New Met — the reason being that Callas made it sound supremely worth trying (it was her
favorite role), while Sutherland and Caballe made it sound easy to sing; so that all kinds of
singers took it on who had no business doing so. It’s a killer, demanding not only effortless
floating tones and stunning coloratura on her first appearance (plus the ability to blend with the
other soprano’s coloratura later on), but the dramatic capacity to hold an audience through the
solo scene of attempted infanticide, the power to lead the war chorus, the concentrated fury of the
duet with Pollione, and the authority to carry the superb finale.

The Met revives it nowadays, one gets the feeling, because audiences know the many Callas
recordings (or Sutherland’s, or Caballe’s spectacular video from Orange), not because they have
a real exemplar of the role to sing it. And without a Norma, you have pretty tunes but you haven’t
really got a Norma.

The current revival began with Hasmik Papian in the role and is slated to continue with Maria
Guleghina. After her Lady Macbeth — exciting and loud and flamboyantly acted, but with the
ornaments fudged or flubbed — I have my doubts that Guleghina can handle this. Still, she will
certainly play it; it will be a necessary event for all opera lovers sorry they weren’t in Lakehurst
the night the Hindenburg landed. The casting of Papian, who has sung Norma to some acclaim in
Washington and Toronto and whose Met Aida was impressive, spinning controlled pianissimi
better than any Met Aida has in twenty years, gave one hope for her Norma, in spite of
deficiencies those performances revealed in her dramatic imagination.

Such deficiencies necessarily undermine any well-sung Norma, but if the director is aware of
them, appreciates a singer’s talents and weaknesses, they need not kill it. Papian is a handsome
woman with a good figure; she can move on stage; and her tendency to fall back on the sort of
antique dramatic gestures one sees in nineteenth-century engravings (Giuditta Pasta would
recognize all of them, probably invented some of them) is not necessarily wrong for this role.
Sutherland had little stage instinct, heaven knows, but she was a distinct diva presence in the
part: no one wanted to tangle with this woman, and the vocalism was sublime enough to pull it
off. Papian needs someone to walk her through the role, someone who really gets both Papian
and Norma — she gives sympathetic performances on well-directed DVDs — but left to her
own devices, she does not know how to join these attitudes into a woman torn by the
requirements of priestess, lover, mother, friend, patriot, heroine: Papian only portrays a singer in
search of a good spot on the stage.

Her vocalism, at least on the first two nights, did not justify her choice for this role either. Bereft
of brilliant high notes, she took the lower choices — which are valid if one makes something of
them — and she made pleasing use of grace notes in the “Vieni a me ritorna,” without, however,
ornamenting the repeat. (What’s the point of repeating a cabaletta if you don’t vary it, make it
individual?) She grew steadily more in command as the evening progressed, but she showed no
sign of becoming Norma, the person Bellini invented, until the final furious duet with Pollione
when gleaming metal furled from her throat, displaying a high register and a command that had
no precedent all evening. Norma is not an opera for a diva who takes an act and a half to warm
up to it, and if Papian ever truly was one, that time seems to have passed. (The only soprano of
this generation whose Norma — she has never sung it — would arouse my real interest based
on her evident abilities would be Krassimira Stoyanova: a fine actress and, based on her Anna
Bolena, one able to sing brilliant coloratura expressing genuine rage.)

The Adalgisa of the evening was Dolora Zajick, who would make an interesting Norma. She, too,
would sing it low, but she would sing it with the style and personality the part calls for — she
would eat her Adalgisa alive, which no Norma would ever manage with Zajick’s Adalgisa. Well
known and well loved for her powerhouse mezzo, a fiery Amneris who sadly has not been able to
persuade the Met to trust her with such operas as Tchaikovsky’s Maid of Orleans (which she has
sung in many venues, always triumphantly) or Donizetti’s La Favorite (which she could easily
bring off, with the right tenor), Zajick scales her big voice down for the demands of bel canto
style. Indeed, her grasp of that style, of the evenness and delicacy required, were lessons Papian
could study with profit. (Zajick had similarly shown up a caterwauling Jane Eaglen when the
production was new.) 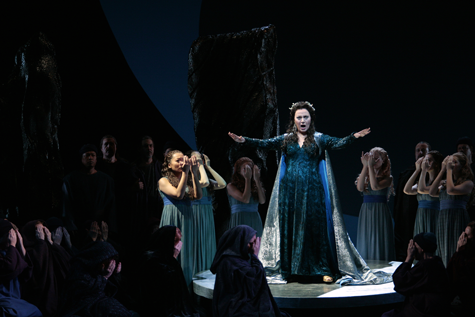 Scene with Hasmik Papian as Norma

Pollione was Franco Farina, a handsome burly figure but an uneven singer. In fact, he gave more
pleasure in this role than he has in others — either Bellini suits him or he’s growing up. There
were honeyed phrases in his first aria, and when a line lay too high for him (this varied from
night to night, apparently as he gauged his chances of reaching a C), he interpolated an attractive
variation on Bellini’s melody instead — a practice the bel canto era would certainly have
regarded with approval. He matched Papian’s passion in their final duet and looked genuinely
thunderstruck when she proclaimed her guilt to her people. If the money notes come more easily
and he continues to focus on flowing line, he could be a real asset in roles like Radames and
Riccardo; he has power, and he doesn’t bark.

Vitalij Kowaljow made gorgeous sounds in the thankless part of Oroveso; one day, when he is
the house’s reigning King Philip, we will remember his long apprenticeship. The tension I always
feel at any performance of Norma — am I going to want to murder the children before she gets
around to it? — kept me on pins till the final scene, when the already annoying tots appeared
quite gratuitously. Dammi il ferro. (I don’t advise them to stick around when Guleghina arrives.)

Maurizio Benini led a swift-paced, bang-up account of the score. There were places that might
have been more sensitive to emotional movement, and balances in the orchestra that favored the
oom-pah-pah bass line over melodic flavor, but there was little chance of anyone going to sleep.
John Conklin’s sets, with their profusion of coffee tables and an opening scene set in what
appeared to be a glossy-floored Druidic art gallery displaying a show of overfed Giacomettis,
generally managed to stay out of everyone’s way. Now if only a Pasta or Callas or Ponselle had
cared to grab the center stage.