A modern way to embed diverse operatic arias into a unified storyline,
Buddug Verona James is brilliant as Pedrolino, il magnifico. Il
primo castrato del mondo! A one-woman show, it premiered at the Theatr
Mwldan in Wales and its operatic offerings are collected here on this
must-have Handel-centric collection.

Several years ago, I heard Buddug Verona James perform the title in
Gluckís reform opera Orfeo ed Euridice in Toronto with Opera
Aetelier. She was quite wonderful in the role, to say the least, and I
have since continued to keep track of her career. Not only is Ms. Verona
James an accomplished singer, she is also a consummate actor, a notion that
is fully exhibited here in this recording. Even without seeing her, one can
hear the drama through her singing and she is, as ever, infinitely
expressive.

Although Handel was not Italian, he specialized in writing operas based in
the Italian aesthetic but he expanded upon the already existing style and
created heroic roles for the most beloved and cherished voice of the day, the
castrati. Castrati were, in essence, men who had glorious
voices as young boy sopranos and whose family would offer them to the service
of the church. In a barbaric practice that ceased around the end of the
century, the young boys would not be entirely castrated, rather, a specific
artery would be severed that allowed their voice to sing in the upper
register where a soprano or mezzo-soprano would normally sing, even after
puberty. These voices possessed incredible power and the capability of
effecting intensely long lines of florid coloratura. For this
reason, Handel began to write arias that were embedded with
coloratura and lugubriously long-winded lines. Today, mezzo-sopranos
often perform the roles of the castrati, however Buddug has caused a
pseudo cross-dressing innovation by being a woman who is playing a man who
sings like a woman.

The CD opens with one of Handelís delightful and charming arias, ìDopo
Notteî from Ariodante. Each aria is associated with the name of a
historical Castrato, in this case Carestini (c1705-c1758). It begins with a
lovely balanced instrumental introduction, from which Ms. Verona James glides
in using appropriate aesthetic properties, voce bianca and swelling
into a gloriously full-bodied sound with vibrato. Her Italian is quite
wonderful and authentic, with significant use of legato for affect. Ms.
Verona Jamesí voice is a lovely burnished mezzo with a spectacular
squillo in the upper tessitura. Her fioritura on ìvago soleî is
a technical wonder and she ends the prima parte by applying a trill
affect that is so stunningly produced that it seems almost computerized.

The instrumental consort is supportive and never over-bearing. They
interact with each other, and provide a solid foundation for Ms. Verona James
glistening passages. The contrasting B section of the aria is well produced,
with the Violin first stating the coloratura passages that Verona
James applies directly after, in an imitative fashion.

The return of the opening section is imbued with textual-painting, and her
fioritura and use of baroque aesthetic practice is to be commended.
An expansive and wonderful depth of tonal range, Ms. Verona Jamesí ending
stretches from the very top of the mezzo range into a luscious chest voice,
that is commensurate with landing on the word ìterraî (ground). Listening
to Handel sung by a poor singer often be boring, however there is not one
boring moment in this interpretation of one of Handelís beloved arias.

ìCara Sposaî from Rinaldo is another of Handelís gems. This
opens with an appropriately chosen tempo with the gamba and violins
in weepy conversation. In an aria where mezzos often blow the roof off the
opening line, Ms. Verona James sings it in a reserved and appropriate
aesthetic. The lovely dissonances are blatant here and the voice almost
resembles a member of the instrumental consort, rather than a voice being
accompanied by instruments. The instrumentalists here exquisitely perform the
lovely falling lines Handel writes for them. Ms. Verona James employs a
pathetic tone and uses minimal vibrato here, to invoke pathos. She uses the
text most powerfully. Her arrival on the word ìpiantiî is enough to give
one shivers. There is a painful aura about the stretched dissonances and
exuberant control applied by Ms. Verona James.

The middle section is a wonderful display of vocal control and her mastery
of the Italian language. She easily throws off the intricate text and
continues within the style of the day. This is the mark of a truly
experienced vocalist.

The ornamented return of the prima parte is lovely with circular
ornaments and some exquisite choices in terms of the Baroque penchant for
dissonance. Ms. Verona James is so lovingly bound to this aesthetic that one
wonders if this is exactly how we would have heard Handel during his day. A
truly wonderful and expressive performance without the sometimes-bombastic
interpretation of modern day singers who see this as a ìbigî sing and
infuse it with emotion that would not be possible by a character in such
pain.

From La Resurrezione, Ms. Verona James, in the style of
ìSenesino,î sings the aria ìPiangete.î A lovely opening, this aria
demonstrates how Handel oftentimes moves to key areas that are not
anticipated. The lower range of Ms. Verona James voice is expressed here. It
is seamless; there is not even a hint of shifting through the
passaggi. Her expressive application on ìPiangete, sÏ piangeteî
is perfectly matched by the weeping quality of the gamba that is
also in its lower range.

On an aside, most of Handelís arias are more historically known as
Da Capo arias (where there is an ABA form followed in the music,
with the B section exhibiting a contrast from the A material. The opening
material is then repeated but ornamented by the singer, and should be in
authentic aesthetic practice.

ìSento la gioiaî is from an opera that is not often performed but that
consists of several attractive arias, Amadigi. Ms. Verona James has selected
two contrasting ones from Amadigi for this recording. She has been
wise to select arias that display the different areas of her voice. This lies
definitely in the mid-range and is a shimmering display of coloratura and
technical prowess. The word ìscintillaî and ìstellaî (glimmering
stars) is almost representative of her vocal quality. In a most wonderful
moment, the instrumentation stops while she holds an extended tone in
voce bianca that is breathtakingly beautiful. The middle section is
introduced by a lovely duet by the violins. Again, Ms. Verona James gives an
authentic textual performance here. The return of the opening material is
more imbued with vibrato and full-bodied singing, as the style suggests. Her
fioritura is priceless, breathtaking, and effortless

One of Handelís most beautifully written arias is ìPena Tirana,î
also from Amadigi. This is a lovely opening with a glorious
expansion of dissonances. In a more weeping interpretation than is sometimes
presented, Ms. Verona James is secure and stately in her aesthetic value.
When in duet with an instrument, she is always sensitive to the instrumental
value and doesnít cloud its importance with her own voice.

The B section begins with a repeat of the opening instrumental material
with a lovely falling line. Imbued with a continuing lyrical bass line,
Handel creates a countermelody that functions effectively with the voice.
Perhaps Ms. Verona James use of ìtísî in the Italian here are a little
too explosive for authenticity’s sake and could have been softer. The repeat
of the opening material is beautifully ornamented and effected by both
soloist and ensemble.

In ìHo un non so che nel coreî used in La
Resurrezione/Agrippina/Il Pastor Fido the opening, in duet with a solo
violin is rhythmically exciting and Ms. Verona Jamesí voice is open and
freely spinning here. The following display of cross-rhythms created by the
instrumental ensemble is not anticipated. The instrumental group sounds more
like a swing-group. Here we have juxtaposition of modernity over a historical
voice. I had an excellent laugh at the end of this, especially with the
interjecting ìHey!î by the instrumentalists. After a CD of serious and
technically riveting moments, this comes as a surprise and is a little
shocking at first, but pleasantly so. 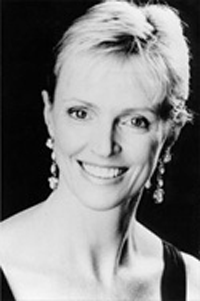 ìAddio miei sospiriî from Orfeo ed Euridice is the only
offering by Gluck and ends the CD in, what is, a lovely display of Ms. Verona
Jamesí tonal range and almost unbelievable ornaments. A good number of
years ago, a young mezzo emerged with such coloratura that it was
said to be almost impossible, Cecilia Bartoli. Listening to this, I would
equate Buddug Verona James with a similar technical ability for creating such
seamless coloratura; so similar, in fact, that I am going to go so far as to
suggest that displaying these two singers in the same production would be
more than remarkable. Brava Buddug! This true historical and technically
masterful singer deserves to be recognized and valued in the opera world as a
brilliant gem.