Ironically, the only
one of these faux-Wagnerian epics that became (and remained) a popular hit
was Humperdinckís 1893 setting of a Grimm fairy tale, which achieved the
perfect union of tunes kids could appreciate (and even sing themselves ó he
wrote them for his sisterís children) and orchestral method that savors of
Meistersinger. Hansel und Gretel makes use of Wagnerian
counterpoint without all those embarrassing Wagnerian emotions, both immoral
and illegal ó Hansel and Gretel do not go running joyously into an amorous
night. 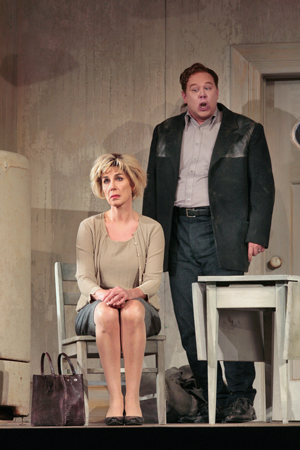 In the present era, when children imagine themselves too sophisticated for
fairy-tale kitsch (though they still love it in the right circumstances, and
the old Met production was perfect of its kind), when they are raised on
sarcastic cartoon banter and an After-School Special level of squalor, it
seems that the presentation of Hansel und Gretel must modernize too.
Hence the new Met staging, borrowed from the Welsh National Opera with a
number of Brit trappings, such as a Witch in drag out of panto. The titular
children, when we meet them, resemble shell-shocked raggedy dolls, listless
and starving on oversized chairs in a low-rent kitchen. Later they fall
asleep in a forest that resembles a very large dining room (terrific
scary-forest wallpaper out of a Maurice Sendak tale and nightmarish waiters
with branches for heads), dreaming not of angels but of Pillsbury doughboy
chefs. The Witch lives in an industrial kitchen suitable to a summer camp and
appears (in Adam Kleinís delicious performance) to be doing Julia Child and
Dame Edna in tandem. Papa probably drinks and Mama is haggard from overwork
(we are plainly dealing with latchkey kids here), and the dreams are not of
Godly salvation but of gaudy desserts. 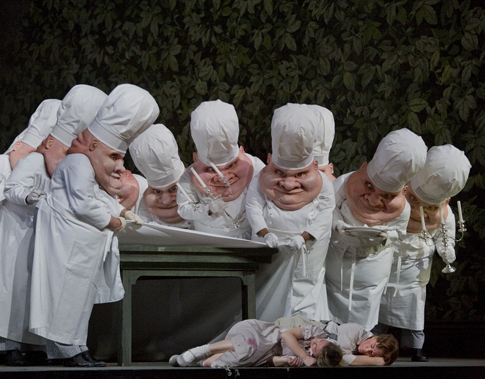 Thereís a lot of good fun on the stage ó what kid wonít snicker at a
grown man in drag? ó but will this do for holiday resurrection year upon
year, as the fairy tale staging did? Or will once or twice do it? And will
the kids have nightmares from those tree-waiters? I did. A friend of mine
encountered a subway car full of kids after one of the special matinees of
this production, and much as theyíd loved the witch, the enormous
machine-propelled Mouth that invites our heroes into her house was not their
idea of fun. 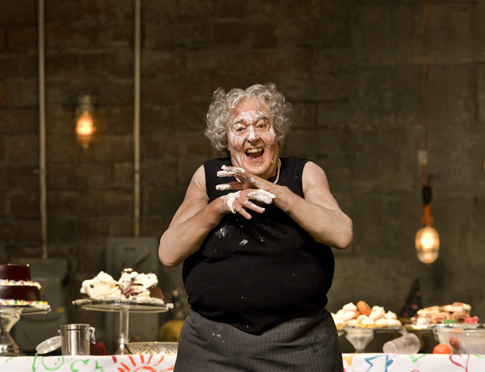 There is a lot of good Wagnerian melody coming from the orchestra under
Vladimir Jurowski and a lot of good singing from the soloists, and the
staging ideas, if they donít all make sense, pass the time entertainingly. 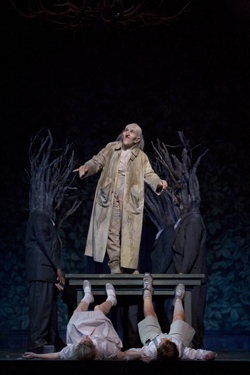 The piece is performed in an updated translation that sometimes fights with
the old-fashioned music, and Christine Schaeffer as Gretel, the only singer
in the cast who was not a native English-speaker, had some problems getting
her words across ó but thatís what subtitles are for. She and Alice Coote
(a fine Sesto and Octavian ó will I ever see the charming Ms. Coote in a
girlís role?) produce clear, reliably sexless vocal lines ó these two
proto-Wagnerian characters must carry over a Wagnerian orchestra with
apparent childish ease ó and they had fun mingling the demands of the
libretto with moves borrowed from modern video. Rosalind Plowright looked
like a harried denizen of Coronation Street, but the motherís role is by no
means a simple one, and she sang it effectively. Alan Held filled the theater
with impressive vigor as the father ó it was no surprise after this
performance to learn he is preparing Wotan for the D.C. Ring. 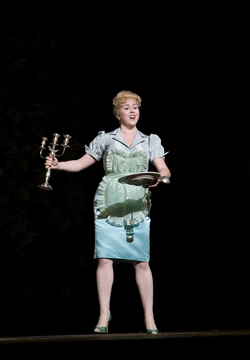 Lisette Oropesa sang the Dew Fairy sweetly in hotel chambermaid drag. In
short, the piece came off, the Witch got her madcap laughs (we all liked the
paper sleeves she placed on Hanselís wrists and ankles before baking), and
there was joy to share. What more does one ask of this opera? Magic?

Of genuine magic there was only one moment all night: the aria of the
Sandman, as sung by Sasha Cooke of the Metís Lindemann Young Artists
Program: a light, clear voice, seemingly tiny but produced so that it easily
filled the house and fell on each ear like fairy dust, a subtle staging that
was, for once, not an intrusion but a rare visit from the atmosphere of Grimm
to a corrupted world.