Perhaps this trend died away with the greater ease of jet travel, or in a recoil from the ultra-nationalism which produced devastating wars. It certainly took a long time for Germany to begin offering, say, Verdi in Italian.
The trade-off is imperfect, however, as most singers sound their best singing in languages they are truly comfortable with. And what greater comfort than one’s mother tongue? So three recent Gala releases of mid-twentieth century radio performances from Moscow of Italian and French repertory sung in Russian may at first seem like mere curiosities. Actually listening, however, may develop converts to the older style. Though initially the sharp, brusque sound of Russian may seem all wrong for Rossini or Delibes, the great singers captured here know their roles, and though these are not live performances, the sense of immediacy is palpable.
All the sets find room for extra tracks dedicated to one significant performer in each opera. Unsurprisingly, the Il Barbiere di Siviglia, recorded in 1953, focuses on the estimable tenor Ivan Kozlovsky. Besides his Almaviva in the opera, we also get on disc two his Gounod Romeo and in a particularly rare treat, a vocal version of Tchaikovsky dramatic overture to the Shakespeare tragedy, both sung with Yelisaveta Shumskaya’s Juliet. Kozlovsky, in his early 50s at the time of the recording, retains his amazing upward extension, and ample evidence of that comes early in “Ecco ridente.” Although all the recordings have decent sound, the hollow acoustic of the radio studio doesn’t allow the tenor’s tone to bloom, and it isn’t always pleasing. But his technique still prompts respect.
The Figaro, Ivan Burlak, sings a rough but enjoyable “Largo al factotum.” Vera Firsova’s Rosina won’t develop easily into the mopey countess of Mozart’s Nozze. Her feisty, yet sweet, voice made your reviewer think of a Russian Victoria de los Angeles. In the singing lesson she performs a strong “Bel raggio lusinghier” from Semiramide. The great bass Mark Reizen growls humorously in a delightful “La Calumnia.” The booklet essay, by the way, only provides biographies of Kozlovsky and Reizen, along with a brief synopsis of the plot and a few lines on the opera’s premiere. Track listings for all three sets discussed in this review appear in the libretto’s original language. 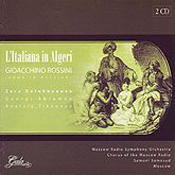 Both the Barbiere and the L’Italiana in Algeri feature a clunky piano to accompany the recitatives. Although the cast is less familiar, the L’Italiana comes across as just as fun. Gala’s chosen focus here is Zara Dolukhanova, with the entire booklet essay providing information on her career. In the bonus tracks, she offers a darker but still passionate Rosina for “Una voce poco fa.” Two strong excerpts from Semiramide suggest that if the complete performance exists, it should be released. Her Russian version of Meyerbeer’s “Nobles seigneurs salut!” from Les Huguenots confirms what her Isabella in the main performance demonstrated: she could move that creamy voice as smoothly and quickly as required. Her supporting cast delivers solid performances, with the tenor, identified as “A. Nikitin,” being overshadowed by his counterparts on the other sets. 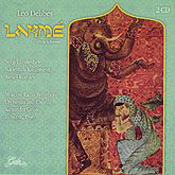 The third set leaves Rossini for Delibes’s Lakme. The famous duet, “Viens, Malika,” goes at a surprisingly snappy pace for Nadezhda Kazantseva, singing the title role, and Anna Maliuta. Kazantseva doesn’t sparkle as some sopranos have done in the “Air des clochettes,” though she has the notes. By the end of the set, a lack of variety in her tone has taken some of the exotic charm from her Lakme. Gala’s choice for the spotlight here is the Gerard, tenor Sergei Lemeshev. He has more honey in his voice than Kozlovsky, but less individuality. The bonus tracks have sharper sound than the just adequate 1946 recording of the Delibes opera. Lemeshev’s slight vibrato is loosening a bit in these tracks, though he sings a touching “Elle ne croyait pas” from Thomas’s Mignon.
Considering the modest price Gala charges for its amply-filled sets, lovers of opera who want to explore the riches of a lost world of traditional opera performance should look for these sets. And Gala would do well to issue more, if more are to be found.
Chris Mullins