The theme seems to be iconic imagery in realistic photographs. For the fine Claudio Abbado-led La Cenerentola, the cover features a young washerwoman with wooden bucket and straw broom. She looks sad – hasn’t anyone noticed her short skirt and cleavage-exposing blouse? Thankfully no model had to risk her life by posing amid the flaming pile of sticks for the Il Trovatore set.
Well, if such artwork catches the eyes of potential customers, their ears will be further rewarded with the performances contained in these sets. Abbado’s elegant Cenerentola stars Teresa Berganza, who can sing sadly with great sweetness. When her big moment comes at the end of the opera, Berganza marries solid technique to refined joy. The bravura excitement of Cecilia Bartoli may be missed by some, but the Bartoli set, to the extent it is still available, remains at full price. Neither Bartoli nor Berganza have star tenors for the role of Don Ramiro, which has been sung with such beauty by Juan-Diego Florez, among current tenors. Luigi Alva on this 1971 DG set, while displaying command of the idiom, lacks tonal beauty. Paolo Montarsolo blusters as Don Magnifico, a character not easy to take on a recording. Renato Capecchi’s Dandini slithers in and out of ensembles with appropriate slickness. The London Symphony orchestra and Scottish Opera Chorus make up for any perceived lack of Italian warmth with precision and style. 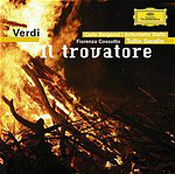 More than Italian warmth, fire burns through the Tullio Serafin Trovatore set. The cast listing in the booklet puts Ettore Bastianini’s Conte di Luna first, and why not? His portrayal rages and aches with a passion that makes him much more than just the baritone villain. The “Il balen” alone makes this set precious, with gorgeous tone and supple, long-breathed lines. Sparks to light more than a few pyres fly when Bastianini meets the Azucena of Fiorenza Cossotto, near the start of her international career (the recording dates from 1962). Demonic in her low notes and fierce when she reaches high, she dominates the performance as only a truly great Azucena can.
The ostensible leads both give worthy performances, if ultimately outshone by both the stars mentioned above in this recording, and by other singers in their roles on other versions. Antonietta Stella’s lovely soprano sometimes threatens to spread at the end of long lines or high-flying passages. Ultimately her very feminine sound carries her through. Carlo Bergonzi gives a more bel canto reading of Manrico than is typical. The character is a troubadour, after all, and Bergonzi makes it clear that Manrico can sing quite beautifully. He does fire up the engines for “Di quella pira,” with an understandable if amusing delay before firing off the climatic high note at the aria’s end.
Serafin proves again his mastery of Verdi, and the chorus and orchestra of La Scala perform with their expected conviction. The overly bright recording, however, lacks any sense of dramatic space.
Both sets come with detailed track listings that include plot summaries of the action at key moments, in English, French and German. Your reviewer could find no word of a link to an online libretto in the booklet. So these sets can be best recommended to opera fans who already own sets with more complete packaging. Both offer ample musical reasons for adding them to any collection.
Chris Mullins