As with most of their sets, for the 1972 Turandot Gala
offers the complete performance and then fills the second disc up with
extracts from performances by one of the key singers from the title
performance.

But Gala doesn’t follow this practice for the Attila, oddly
enough, since it preserves a great performance from Samuel Ramey. The bonus
cuts here go to well-known artists from the same era as those of the
Attila. From performances under Claudio Abbado at La Scala in 1979,
we hear Placido Domingo in Luisa Miller, and a trio of Don
Carlos arias, featuring Yevgeny Nestrenko, Leo Nucci, and Katia
Ricciarelli. Piero Cappucilli closes the CD with an elegant “Eri tu” from
Un ballo en Maschera.

However, after hearing this rough but exciting Attila, closing
the set with some more Ramey, or at least excerpts from other early or rare
Verdi, would have been wonderful. Be that as it may, the opera has the
benefit here of a fiery live performance, recorded in clean if not expansive
sound. Ramey has the audience on his nasty Hun side from the beginning, and a
raucous crowd demands a bis of “Oltre a quel limite t’attendo.” Some
may regret the current state of the singer’s voice, but here the enveloping
darkness of his bass is firm and yet flexible. Another American sings
Odabella ó Linda Roark Strummer. She has a wild, apparently huge voice.
While not exactly refined, her lunging high notes and aggressive approach
suit the character. Veriano Luchetti, as Foresto, brings a reliably vivid
Italian tenor sound to the mix. William Stone is a capable if somewhat bland
Ezio. The chorus and orchestra know the idiom and perform it with
exuberant professionalism, under the baton of Gabriele Ferro. 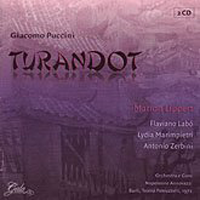 The 1972 Turandot, recorded at the Teatro Petruzzelli, suffers
from poor sound, with the source apparently being an audience member (if the
occasional chatter is any clue). Often the singers seem to be caught in a
stage position that allows the orchestra to cover their voices. In a few
places the tapes seem to have deteriorated, leading to sudden jumps. At any
rate, the performance, while decent, hardly suggests that the unsatisfactory
sound is any tragedy. Gala gives star billing to Marion Lippert, a German
soprano whose career eventually took her to a couple dozen performances at
the Metropolitan Opera. The booklet essay quotes some reviews that praise her
stage demeanor in the role, which obviously cannot be evaluated in this
recording. Although not uncomfortable with the role’s challenges, she brings
little that is individual. Flaviano LabÛ ducks a couple of optional high
notes, but he sings a handsome, manly Calaf. Lydia Marimpietri earns the
usual happy applause for Liu’s melodic, sad arias. She is fine, but the
applause really should go to the composer. With the sound in its lamentable
state, making judgments about Napoleone Annovazzi and the theater orchestra
would be unfair. 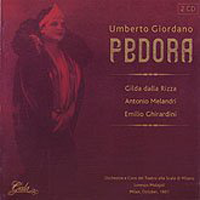 Surprisingly, the audio on the 1931 La Scala Fedora prompts no
complaints, especially after that Turandot. This is not a live
recording, but the notes do not establish a provenance. Within a few seconds
of the opera’s beginning, the ears adjust to the limited spectrum, although
at places greater orchestral detail would be desired. That is due to the
naturalness and devotion conductor Lorenzo Molajoli brings to Giordano’s
score. Fedora at this date seems unlikely to ever attain a firm
place in the repertory, but heard here, it is possible to understand that at
one time, it seemed to have earned that distinction. A short opera with a
confusing, unconvincing libretto, it needs performers who truly believe in
it. There is true “golden age” glamour in the singing of Gilda dalla Rizza,
the Fedora whose revenge for her fiance’s death leads to her own suicide when
she realizes she has destroyed the loved ones of the killer she has come to
love. A tight vibrato and crisp enunciation give her performance a
conversational quality, although she certainly lets fly with some passionate
outbursts. The heart of the opera, a long duet in act two, finds her
well-matched with the Loris of Antonio Melandri. He gives out almost as many
sobs as he does ringing high notes, but in the red-blooded context of this
opera, his handsome voice can be excused some excess.

The conclusion of Fedora takes up fewer that 15 minutes of the
second disc. Once again, in filling out the side Gala wanders away from the
stars of the main opera. Here the star becomes Lina Brusa-Rasa (although she
gets no mention in the booklet, which does contain an admirably dense and
detailed synopsis of Fedora, by Andrew Palmer). Lengthy highlights
from an Andrea Chenier, also from La Scala in 1931, have the
unfortunate effect of making the preceding Fedora seem even slighter.
Bruna-Rasa is authoritative and affecting, and well-partnered by Luigi Marini
as ChÈnier and Carlo Galeffi as GÈrard. The lovers’ final duet might be
worth the price of the set for some ó urgently paced and thrillingly sung.
After that, Gala still has room for arias from Mefistofele,
Aida (actually the third act duet with the Amonasro of Galeffi),
Cavalleria Rusticana, Manon Lescaut, and Tosca.
Bruna-Rasa sings them all with both passion and taste, her very womanly tone
mature only in the sense of ripeness and security.

So the Attila and Fedora earn recommendations to anyone
interested in the operas or the singers. The Turandot would only
find favor with any fans of Marion Lippert.