Michael Levine’s set designs and Peter Mumford’s lighting are utterly beautiful, from the floating lanterns and curtain of flowers which descend upon Butterfly and Pinkerton on their wedding night to the dramatic brush-stroke effect of the unravelling of Butterfly’s crimson obi at her suicide. Despite Minghella’s film credentials, it is not a cinematic approach as such, though the steep rake and the giant mirror above the stage create a ‘widescreen’ effect which suits the shape of the Coliseum’s stage and concentrates the eye.
Although the staging keeps Pinkerton as very much a one-dimensional character, the production’s Bunraku puppetry ñ expertly supplied by Blind Summit Theatre ñ gives the audience a little glimpse into the beliefs and perceptions which cause him to act the way he does. The exquisitely lifelike puppets, most notably used to portray Butterfly’s son, blur the boundaries between artifice and reality, and it becomes almost easy to accept Pinkerton’s perception of the Japanese as pretty playthings, not quite real. Sometimes the puppets seem more natural than the human performers.
Indeed, there is a risk with such a staging that it could sacrifice substance for style, and as such it needs a very strong cast to balance it out and reach the heart of Puccini’s opera . I confess I was apprehensive about Judith Howarth’s debut in the title role, as her (very successful) career has been almost entirely in the lyric coloratura repertoire. I need not have worried; the soft-grained, pearly quality of her soprano, though not the sound we are used to hearing in the role, proved equal to Puccini’s characteristically heavy scoring and an appropriate timbre for this most youthful of operatic heroines. Her stage presence and mannerisms were just as credible, and she was shattering in her vulnerability. It was perhaps a misjudgement to pair her with as vocally powerful a Suzuki as the excellent Karen Cargill, but this is really a minor criticism.
As Pinkerton, Gwyn Hughes Jones, returning from the original run of the production, was in fine voice. He was allowed ‘Addio, fiorito asil’ despite the modern fashion to do without it, but it seems superficial. Sharpless ñ the one character who can see the situation from every angle and is left with the responsibility for damage limitation ñ was given a warm and dignified portrayal by Ashley Holland. 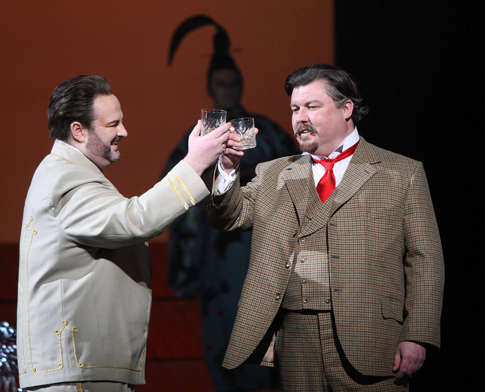 Musically this revival was in every way superior to the original run in 2005. David Parry was once again in the pit, giving a sensitive and never self-indulgent reading of the score. Words came across well, except in parts of Act 1; members of ENO’s chorus made clearly-defined characters of their cameo roles as wedding guests. But above all it was a remarkable personal triumph for Judith Howarth.
Ruth Elleson © 2008 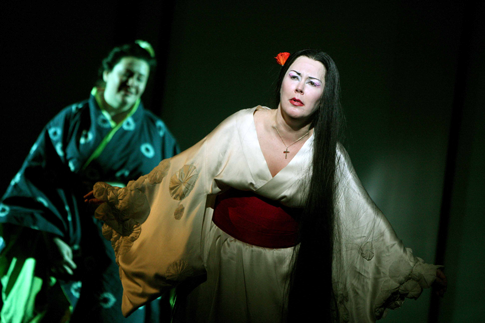