A bloated, insult-wielding drunkard who finds
himself suddenly broke, he seeks to free himself from debt by wooing two
wealthy womenóboth with the exact same love letter. When Alice Ford and Meg
Page, the ladies in question, discover that they are being played for fools,
they band together with the help of their friend Mistress Quickly and plan to
dupe Falstaff. The musical result is one of the rare occasions when comic
opera is actually funny. Played, as such evenings often are, to the blind in
the 10th balcony, the laughs at Lyric are more often than not collective
good-natured chuckles than guffaws of genuine surprise. Still, on opening
night, the audience clearly enjoyed the operaís style of comedy, investing
in the show and audibly rooting for its favorite characters. This notion is
further reinforced by Frank Phillipp Schlˆssmannís Globe Theatre-inspired
sets, which immediately transplant the audience into a world where a broader
method of presentation is the norm. Costumes were traditional, but the bold
colors contrasted beautifully with the amber-toned sets.

An audience can expect a thoroughly enjoyable evening of theatreóeven if
there are slight problems with the productionówith a Falstaff from
a top-notch company like Lyric Opera of Chicago. Picky imperfections in
performance pale in the shadow of the brilliance of the work itself,
obviously a labor of the composerís love.

Like any comedy, a Falstaff is only as strong as its sense of
ensemble, and, in something of a coup, by utilizing the brightly burning
talents of current members of the Ryan Opera Center and supplementing them
with the Centerís alumni, the administration has gathered a group of
artists used to working with each other and who, out-singing most of the
imported stars of the evening, present a tidy troupe. Even though director
Olivier Tambosi fails to tighten the comic timing to sharp punctuality, the
general mirth on stage more than carries the eveningís entertainment. Once
again stepping forward with her booming voice, Meredith Arwady sparkles as
Mistress Quickly, and her ìRiverenzaî scene inspired most of the genuine
laughs of the evening. Elizabeth DeShongís Meg Page is sprightly and
attractive of voice. Of the current Ryan Opera Centerís roster, the most
notable singer in this opera is Bryan Griffin, whose turn as Fenton is marked
by a lyric tenor voice of both sweetness and strength, and Ryan Center alum
Stacey Tappanís crystalline Nannetta soars opposite Mr. Griffin. David
Cangelosi, whose character tenor roles are well known at Lyric for their
physicality, seems positively subdued next to the boisterous commedia
dellí arte characterization of fellow alumnus Rodell Roselís
Bardolfo. 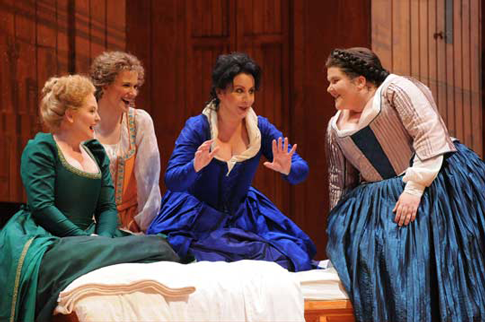 Though not advertised as Megastars, one would expect the leads of this
production to outshine the ensemble easily, but such was not the case. As
Alice, Veronica Villaroel is not the plastic prima donna spinning measure
after measure of line while ignoring the baser nature of the material; the
Chilean soprano found some joy in even the subtler moments of the comedy.
Neither is Villaroel the soprano with very little in the way of voice, but
with star power to burn. (In fact, she sang Alice with no apparent strain.)
Villaroel lands this role instead somewhere in the unfortunate
pleasant-enough middle ground and manages neither to offend nor excite.
Similarly, Andrew Shore in the title role perhaps does not have the
wherewithal to color more lyrical moments with the vocal subtlety he intends;
however, he does make a convincing Falstaff, barking and seducing at regular
intervals. The audience may forgive the slow moving actor because of the
additional costuming required to render him obese, but his physical comedy
fell short of the standard set by other members of the cast. Boaz Daniel, on
the other hand, as Signore Ford, turns in a thoroughly engaging vocal
performance, his robust and appealing baritone easily launching itself
expressively over the orchestra for his aria ì» sogno? O realt‡Öî

Andrew Davis, conducting what the official press release calls his
ëífavorite Verdi operaî, keeps the evening well paced in this
reviewerís opinion. His tempi, though, may have been a little slow for
those on stage; the singers consistently tried to rush the Act One finale.
Granted: the Act One finale is incredibly difficult to keep together, and the
cast does a noble job of trying, perhaps, though, it could stand to watch the
bouncing head of hair up front a little more. Still, the opera itself is sung
very well across the board, the stagecraft solid, and the evening spent in
the Civic Opera House absorbing Verdiís last masterpiece is well spent.