Just because most, if not all, of the better-known pieces from a particular work have been included, that doesn’t necessarily make the performances highlights of those particular sets. “Selections” might be the more modest term. 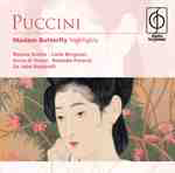 EMI prompted the above thought with a new line of “highlights” from its extensive catalog, released on its budget Classics for Pleasure series. (No, you won’t find Moses und Aron or Lulu on its Classics Not for Pleasure series). Consider two discs of “highlights” from Puccini operas. Sir John Barbirolli’s classic Madam Butterfly (the “a” of “Madama” dropped for no clear reason) boasts a fine cast: Renata Scotto, Carlo Bergonzi, and Rolando Panerai. In its glorious entirety, this recording has a cumulative power, with much beautiful orchestral detail revealed through Barbirolli’s sensitive, if slow-paced, leadership. Although Scotto’s top, even at this relatively early stage of her career, reveals some of the metallic edge that would later characterize her high notes, her assumption of Cio-cio san deserves its high reputation. Not much of Bergonzi’s elegant Pinkerton can be judged by this highlights set, however. He is heard in the love duet and his act two aria, but the set omits the act one arias. At only 55 minutes, the excuse can’t be the CD timing. Beginning with Butterfly’s entrance, only about 15 minutes of the first act appears. The second act gets fuller coverage, with the essential Butterfly/Sharpless conversation, the lovely duet with Scotto and Anna di Stasio’s Suzuki, and then closing with the opera’s last 18 minutes. The single-fold booklet contains a synopsis with numbered references to the track listing.
Only a few years after Montserrat CaballÈ’s classic performance as Liu in the Zubin Mehta Turandot, the soprano moved up to the title role. Joan Sutherland, under Mehta, had used her huge voice to convey both the fierceness and underlying passion of the “ice princess.” Caballe sings the role beautifully, no doubt, but the darker edge is naggingly absent. On the credit side, the riddle scene of act two probably never sounded so melodic. JosÈ Carreras, a frequent recording partner of CaballÈ, retains his beautiful middle voice in this 1977 recording, but the top, frequently called on for Calaf, already sounds unpleasantly pushed. Mirella Freni doesn’t try to compete with the lovely floating tones of CaballÈ’s Liu from the earlier set. Instead, Freni sings a more full-blooded Liu, with all the passion for the Unknown prince. Not much is heard in this highlights set of Paul Plishka’s Timur or Ping, Pang, and Pong. The set times out at a miserly 53 minutes.
Some may respond to Alain Lombard’s deliberateness and delicacy, but your reviewer found the conducting ponderous and fussy. Unless one is a huge CaballÈ fan, the Mehta set remains the version of choice, whether as a complete set or in highlights form. With the Butterfly, true lovers of the opera should seek out the complete set.
Chris Mullins