It
doesnít get quite the international attention it deserves, however, because
itís based ìup Northî, as Londoners would say, in what was once the
nationís industrial heartland. This award-winning production of Brittenís
Peter Grimes shows why the company earns its excellent
reputation.

Opera North has a real affinity for Britten, so with Phyllida Lloyd as
director, this production is something of a milestone in Peter Grimes
performance. Lloydís style grows from the inner dynamic of the opera.
Everything focuses on the music, nothing distracts. The curtain lifts to
reveal the corpse of the apprentice who died of thirst while lost at sea.
Itís a metaphor for the whole opera. In the trial scene, Grimes is fenced
in, claustrophobically, by a wall of pallets, held up by the townsfolk. Later
these pallets are the bastions of the church, and the walls of the pub.
Itís a simple device but effective, underlining the fundamental conflict
between Grimes and the populace who inoculate themselves from the outside
world with prayer and drink. Britten embeds this dichotomy firmly within his
music. The ìchurchî chorus and Ellen Orfordís monologue with the boy
exist in parallel, without interaction. Thereís drama enough in the
orchestra, so Lloyd keeps things simple. Similarly, she doesnít need to
depict the sea, as such. Brittenís cadences sweep upwards and down like
waves. ìA ceaseless motionî, goes the text, ìcomes and goes like the
tide,Örolls and ebbs, terrible and deepî.

This uncompromising focus on the drama in the music intensifies the
disturbing psychological aspects of the opera. Jeffrey Lloyd-Robertsís
Grimes was perceptive : heís not meant to be sympathetic, but neither is he
an object of hate. He may be cruelly insensitive, but both boys died of
natural causes. This role requires a wide range, which Lloyd-Roberts
delivers. He created Grimes when this production was premiËred in October
2006, and much of the depth of the characterisation is due to him. If on this
particular evening, his voice was a little tired at first, he vindicated
himself totally in the ìWhat is homeî scene, when Grimes confronts the
horror of his situation. This time, ìthe tide will not turnî, he will not
ìbegin againî. The intensity of Lloyd-Roberts performance makes his
decision to die at sea completely logical. That last scene, where the
townsfolk sing of the tide pulling back out to sea ìwith string magnetic
speedî was magical. Grimes is absorbed into the sea, and for a few moments,
something quite magical happens in the orchestra, as the strings surge and
the flute rises luminously above. This ending was brilliant, for Lloyd
understands that, throughout the opera, Britten has stressed the relentless
hard grind of the fishermenís lives. ìThis unrelenting workî, as Ellen
sings, that lets up for no man. So as the music fades, but on stage, the
rhythm of life continuesÖ..itís a small detail, but expressing the spirit
of the opera very perceptively.

Unlike some more matronly Ellen Orfords, Giselle Allenës vibrant
characterisation gave a strong sexual charge to her relationship with Grimes.
This is important to the interpretation of the opera, because it shows why
Grimes drives himself so hard, because he wants to make a new life with
Ellen, whom he sees as his redemption. He pushes his apprentices harshly
because life at sea is harsh, as no doubt he learned himself a boy. Sexuality
is a theme in this opera, from which this production bravely does not shirk
away. The townsfolk hint that thereís something unhealthy about Grimes and
his boys, so they mount a witch hunt. The chorus ìBring the branding iron
and fireî was sung with frenzied energy, hinting that perhaps Grimes
wasnít the only person with desires to suppress. Indeed, Britten makes this
clear in the text. Auntie and her ìniecesî most certainly provide an
outlet for some. As Auntie says, she and her girls say, ìwe comfort menî.
One of the more disturbing, but entirely trenchant, aspects of this
production was that the nieces were portrayed as children, one wearing pink
and blue with white knee

socks. Sheís underage, just like the boys Grimes is hunted down for
harming. When sheís propositioned by the town lawyer, that pillar of
society, the text is painfully explicit, but some productions shy away.
Currently in the UK news, thereís a huge story about child abuse in Jersey,
apparently covered up by official whitewash, so watching this production was
decidedly uncomfortable. But it serves to show that Britten knew far more
about hypocrisy and sexual bullying than he was able to articulate. In 1945,
productions couldnít really confront these issues openly. Now, we are
unfortunately more able to appreciate just how deeply Britten understood the
pain.

Yet Britten doesnít judge. In contrast, Mrs Smedley delights in judging.
ìCrime is my hobbyî she says. Although sheís right to be concerned
about the boys, her motivation isnít their welfare, but her own enjoyment
of misery. Ethna Robinsonís Mrs Smedley bristles with barely contained
hysteria, in contrast to Jonathan Summerís Captain Balstrode, who stands
for common sense. Good vignette parts all round, especially Yvonne Howardís
Auntie and Roderick Williamsís Ned Keene. 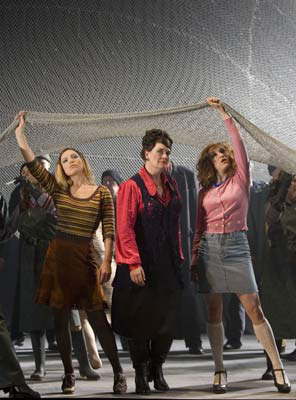 Claire Booth as Niece 2, Yvonne Howard as Auntie and Amy Freston as Niece 1.

Britten valued the orchestral elements in this opera so much that the Sea
Interludes are often performed on their own as concert pieces. Farnesís
conducting was precise and muscular : thereís ambiguity aplenty in the
music, so there shouldnít be in performance. The solos, flute, violin and
oboe were particularly moving, like extra voices, commenting on the action.
What made this production, however, was the way it was built around the
music. A lot of fuss is made of directing style, but in this case, the
direction served totally to reveal deeper levels of meaning. The secret, I
suspect, is ìknow your composerî and ìknow your operaî, through and
through. Anyone wanting further evidence of Lloydís work with Opera North
on Britten might be interested in their DVD of Gloriana.