With its struggle between love
and greed, youth and age, its general joie de vivre, along with gem
after gem of ìhummableî musical numbers, it is an audience favorite.
Myriad opportunities for sheer technical dazzle give connoisseurs an
opportunity to savor the more refined vocal moments of the evening. Lyric
Operaís current run of Barbiere, seemingly like Opera itself at
the turn of the Millennium strives to please all of the people all of the
time, succeeding both as high art and as showpiece. The operaís elements
seem traditional enough, and yet, even a perfunctory glance beneath the
surface yields deeper levels of meaning. John Conklinís sets, which were
inspired by the work of Magritte are representational, with surrealist
elements. Likewise, Michael Stennetsí costumes were both traditional and
whimsical.

A Barbiere resounds or thuds because of style, comic insight, and
vocal ingenuity. Lyricís Barbiere managed to sparkle mostly
because of the immense talent of Joyce DiDonato, who, in her house debut as
Rosina, was both vocally and dramatically a perfect fit for the role. It must
be said that DiDonato is a revelation. Her cavatina, ìUna voce poco faî
was a lesson in bel canto tradition. DiDonatoís ornaments were rapid-fire
and athletic, inspired, appropriate. The voice was exciting in the top with
warmth to spare in the lower and middle registers. It must also be said that
DiDonato is an engaging actress; her Rosina was sympathetic and charming.
During ìUna voce poco faî, when the text returns, ìIo son docileî, in
an inspired moment, DiDonato threw a mini-tantrum, juxtaposing Rosinaís
outward subservience with her inward rebellion. ìContra un corî,
Rosinaís second act aria, was staged as a ìvoice lessonî and DiDonato
was uproariously funny in her impersonation of an amateur singer, placing her
hands on various parts of the body to simulate physicalized learning. When
DiDonatoís Rosina looks to Bartolo for approval, Bartolo furthers the joke
by making hand gestures that suggested voice placement and grace.
DiDonatoís triumph was complete when, immediately before the cadenza, she
mimed exaggeratedly deep breathing.

Opposite DiDonato is John Osborn, who replaced Juan Diego Florez, the
scheduled Almaviva, at the 11th hour. Florezís return had been
much anticipated by Chicago operagoers, and so Osbornís bravery in assuming
the star mantle should be commended. Osborn does not suffer greatly by
comparison to the singer he replaces. His leggero voice coasts easily through
the score, which is notoriously difficult for singers who are less equipped
for this specialty role. In fact, the finale ìCessa di pi˘ resitereî is
often cut because of its fiendish difficulty. The tenor wins the audience
with his agility and stratosphereic finale. If criticism must be given, it is
that Osbornís voice takes a moment to warm up; his ìEcco ridente in
cieloî is perhaps a little heavier than the rest of his singing in the
evening, but he sails through the cabaletta with only a little effort and by
the second scene, sighs through the recit with a lyricism not often heard
from singers in major houses.

Sung by American pin-up baritone Nathan Gunn, the productionís Figaro is
a treat, not only for the sporty physique, which the actor proudly displays
during his ìLargo al factotumî (staged as a dressing scene), but also for
his generous singing. Contrary to some critical opinion, this listener finds
Gunnís voice to be adequate of weight for such a large venue as the Civic
Opera House. Gunn had no trouble projecting over full orchestra for his arias
and duets, but, surprisingly, he drops several syllables of his recitatives,
with only a harpsichord to balance. A little more careful detail to vocal
energy may be in order, but the singerís execution is enjoyable, and
Gunnís relaxed air on stage is very welcome. 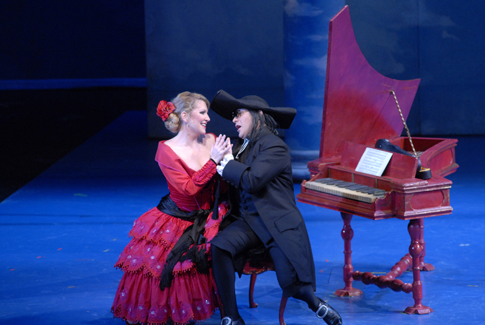 Joyce DiDonato as Rosina and John Osborn as Count Almaviva

Baritone Philip Krauss gives a serviceable Doctor Bartolo. His reading
paled in comparison to the lovers; however, his diction is crisp, and his
aria ìLa calunnia Ë un venticelloî was richer for it. Also of note is
his lovely falsetto that we enjoyed in the opening bars of ìQuando mi sei
vicinaî. In spite of his best efforts, Maestro Donato Renzetti fails in his
attempt to encourage the orchestra to play so loud as to cover the singers
during the quintet, and the overture, surprisingly slow, was out of tune.

Still, this BarbiËre is a must see for anyone who loves this
comic work, and anyone who treasures the bel canto tradition is foolish to
ignore the opportunity to hear Ms. DiDonato teach us how Rossini must be
sung.