These, however, are concepts given new dimensions by the four operas on stage this spring in Sarasotaís newly remodeled 1200-seat theater.

DeRenzi is no friend of Regieoper, the approach to opera that gives the director full freedom to ignore the original time and place of a work ó and the intentions of the composer. At Sarasota Opera, for example,you will never see Handelís ìJulius Caesarî set at the Cairo Hilton,where Peter Sellars once located it to great acclaim. That does not mean,however, that DeRenzi is a man stuck in an bygone age. His concern is for fidelity to opera and for authenticity and integrity in SO stagings.

Much research and study go into each production to make it reflect its time in history. Every effort is made to offer an honest presentation of a composer intentions. All this came to the fore in the seasonís ìI due Foscari,î which was part of two major SO projects. It continued the Verdi cycle designed to perform the composerís entire oeuvre ó operatic, vocal and instrumental ó in Sarasota.

Launched in 1989 by DeRenzi, a Verdi scholar in his off hours, the cycle includes alternate of versions of scores when they exist. It will conclude in2013 to celebrate the 200th anniversary of the composerís birth.ìFoscariî is also part of DeRenziís ìMasterworks Revival Series,î which brings to the SO stage long-neglected works that the director considers of artist merit. The series, begun in 1989, has included such rarities on the American stage as Catalaniís ìLa Wally,î ìKˆnigskinderî by Humperdinck and Rimsky-Korsakovís ìMay Night.î

Given the quality of the SO ìFoscari,î directed by Martha Collins, the neglect of the 1844 score is difficult to understand. The opera, the well-focused and touchingly sad story of a wronged father and son, is without the complexities that often make Verdiís plot line hard to follow. With DeRenzi on the podium, the April 6 performance moved with edge-of-the-seat excitement through three hours of full-blooded choruses ó several of them for men alone.

Italian baritone Marco Nistico brought dramatic intensity to octogenarian Doge Franceso Foscari, while Benjamin Warschawski sang his passionate song with an energetic voice that, however, lacked the support that a good teacher should have given the Swiss tenor. As devoted wife, mother and daughter-in-law Panamanian soprano Reyna Carguill bore the sufferings of Lucrezia Contarini with regal dignity. Jeffrey W. Deanís sets were of classic simplicity, and costumes by Howard Tsvi Kaplan brought the richness of primary colors to the staging.

That one knows of Pucciniís ìLa Rondineî at all is due to the popularity of the aria ìIl bel sogno di Doretta,î a favorite of singers from Kiri Te Kanawa to Renee Fleming. And a pity that is, for the entire work, performed as lovingly as it was at the SO April 5 matinÈe, is an experience of heightened sensuous beauty. Some devaluate the sumptuous score as operetta, for in the directness of its emotional appeal it follows in the footsteps of Viennaís fin-de-sie`cle masters. And the reference to Vienna is indeed valid, for Puccini had been asked to write ìa comic opera likeëDer Rosenkavalier,í but more amusing and more organic.î Whetherì Rondineî amuses the individual can decide, but the work is organic in that is well organized and tightly written. Nothing in it is superfluous. 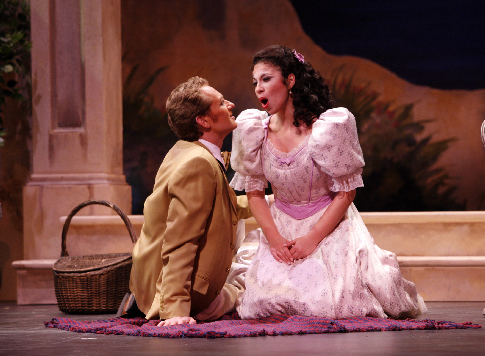 Georgian soprano Lina Tetruashvili, who headed the cast as Magda, was perhaps the top star of the entire ’08 SO season. A young woman of gentle beauty, she was equally convincing as the successful courtesan and as a woman experiencing great love for the first time. As both she was painfully vulnerable, and her delivery of the first-act confessional self-confrontation competed favorably with recordings by established divas. Tenor Ryan MacPherson was a perfect blend of spoiled mamaís boy and unwritten page as a Ruggero who was a perfect partner for Tetrusashvili. As the second couple in the story Christina Bouras sang the maid Lisette with ironic detachment and a sense of good humor about the fools that mortals can be. But the true hero of the afternoon was David Neely, a young conductor whose career centers in Germany. Neely obviously believes in this score and in his surrender to its beauty made a fine case for its greatness.

The scenery and costumes that evoke the time and place of each SO production were particularly noteworthy in the second act of ìRondine.î A cafÈ of the Belle …poque was designed to perfection by Michael Schweikardt.An abundance of glass walls and ceilings, some decorated with sprays of flowers, made visible groups of round lights and a gray cityscape outside. References to the posters of the period by Alphonse Mucha and Toulouse-Lautrec provided a perfect ambiance for chance meetings and revelry.

Sometimes called ìa poor manís ëTraviataíî because of parallels in plot, director Michael Unger proved that ìLa Rondineî is anything but;it is an opera to be taken seriously for its own merits. One hopes that the excellence of the SO staging will lead other companies to consider the work.

It is probably a good thing that Mozartís ìCosÌ fan tutteî lists as a comic opera, for ó considered in the cold light of day ó this opera offers a picture of man ó and woman ó that in its brutal frankness is of a shocking cruelty that would otherwise ban it from the stage. (Indeed, one left the matinÈe performance on April 6 recalling the admonition from Georg B¸chnerís drama ìWoyzeck:î ìHumans, you are sand, dust and filth óhow dare you pretend to be more?î) Small wonder then that it took ìCosÌî well over a century to find its way into the repertory. Fortunately, Mozart conceals his view on human frailty beneath the surface of music irresistible in its charm and Èlan, and Sarasota was fortunate in having as it conductor Pacien Mazzagatti, a youthful American who understands both dimensions of the work.

New Yorker Mazzagatti had cast and orchestra on such short leash that it was almost impossible for the audience to applaud at the end of arias. This practice should spread to operas everywhere, for it was astonishing to seethe continuity and dramatic structure that there is in Mozart when the music is not continuously interrupted by listeners overly eager to show their appreciation. Director Pat Diamond had an ideal quartet at his disposal:Marie Adele McArthur (Fiordiligi), Vanessa Cariddi (Dorabella), Sean Anderson (Gugglielmo) and Chad A. Johnson (Ferrando). Young, good looking and secure in their roles, the four easily kept pace with Mazzagattiís animated approach to the score. Stephen Eisenhard was a worldly Alfonso without the Mephistophelean overlay often encountered elsewhere these days, but it was Alice Bernesche who really made things move as a bright and witty Despina. David P. Gordonís airy sets permitted spoke almost fragrantly of the land where lemons blossom and allowed for quick changes by stage hands also in costumes by Howard Tsvi Kaplan. 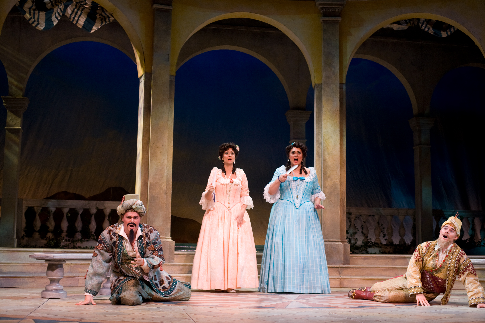 Sean Anderson as Guglielmo, Vanessa Cariddi as Dorabella, Marie-Adele McArthur as Fiordiligi, and Chad A. Johnson as Ferrando (Photo by Danielle Rappaport courtesy of Sarasota Opera)

ìRigolettoî is something of a signature opera in Sarasota. In 1989 DeRenzi launched his Verdi Cycle with the 1851 work and he chose it to reopen the companyís renovated Mediterranean Revival theater this season. (The project cost $20 million.) It is thus surprising that it fell below the standard of excellence and excitement set by the other three works on SO stage this season. Michael Corvino kept the jesterís unsavory side in check to emerge as a truly tragic figure. However, Rafael D·vita sang ó and played ó the Duke with all the markings of a provincial tenor, and as Gilda Erica Strauss failed to catch fire. Impressive singing came from those in minor roles: Jeffrey Tucker (Sparafucile), studio artist Blythe Gaissert (Maddalena) and Jonathan Carle (Monterone). DeRenziís conducting was neither inspired nor inspiring. Stephanie Sundine directed; designer was David P. Gordan, and costumes by Howard Tsvi Kaplan. ìCosÌî was a revival of the 2002 staging; the three other productions were new this season.

Although Saratoga packs its 33 performances ó plus several programs staged by its apprentices ó into a seven week March/April season, the company is an active presence on the Florida arts scene throughout the year.From August through April the SO musical staff works with three Youth Opera Choruses that enroll members beginning at age eight. They stage formal concerts in various venues in the city and appear also in hospitals, senior residences and nursing homes. The ensembles have participated in Italyís International Choral Festival in Tuscany. As soon as the main season ends, work begins on the annual Youth Opera Production that stages works expressly written for children and young adults.

On stage in May this year is Canadian composer Dean Burryís ìThe Hobbit,î a work based on J.R.R. Tolkienís classic novel that was premiered to critical acclaim by Torontoís Canadian Childrenís Opera in 2004. Saratoga presents the American premiere of the work at performances
slated for May 9 and 10. And SO has commissioned Americaís senior music master Ned Rorem to compose a new work for 2009 based on Winsor Mcayís comic strip ìLittle Nemo in Slumberland.î The libretto is being written by J.D. McClatchy. Members of the Youth Opera Choruses work with SOís professional staff as supernumeraries and ó when required ó in
childrenís roles and choruses in mainstage productions. 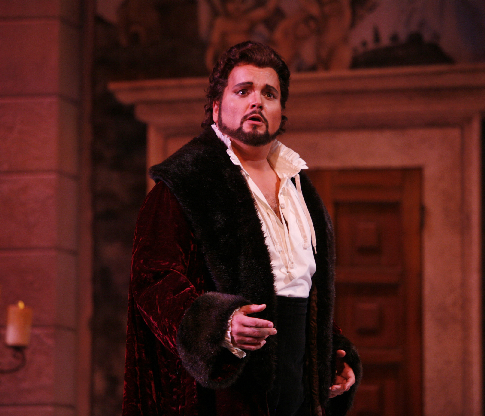 Sarasota, with a population of 300,000, is ó like much of Florida ó primarily a retirement community. It is relatively easy to find
accommodations within easy walking distance of the opera, which has
contributed greatly to the revitalization of the downtown area. The town is
immaculately groomed, and good ó and reasonably priced ó restaurants
abound. Public transportation, although limited largely to daylight hours, is
well organized. It gets one to the famed Ringling Art Museum in only 15
minutes. The small airport is a fairy-tale realm compared to the chaos and
confusion that prevails elsewhere today. A taxi to downtown is as little as
$13.

An advantage of the SO main season is that on two weekends one can hear
all four operas in only three days. On the other hand, it seems a shame to
spend so little time in a town that offers a maximum of leisure at slow
tempos.