A mere 30, the soprano
from ìdown Eastî in Canada, had sung little opera and no Mozart on stage.
When she saw Elettra on stage in New York, however, she found the
role ìpretty much beeís knees.î Elettra is the loser, the woman
scorned, in this sub-story of the Trojan War. Brueggergosman liked
Elettraís fire and found her a woman ìhonest and visceral.î But why be
prissy about words?

The Elettra that made Brueggergosman the sensation of the OA
Idomeneo on stage in Torontoís historic Elgin Theatre on April 29
was all guts and thirsting for the blood of those who had jilted her. Sheís
the fury in the cast, and as portrayed by Brueggergosman sheís a
show-stealer. But thereís so much excellence and excitement in an Opera
Atelier production that no show staged by the company is easily stolen.

OA, launched modestly in 1986, is an early-music enterprise devoted
primarily to Baroque opera ó to Monteverdi and his contemporaries. When
Mozart composed Idomeneo in 1781, he was looking back, for the work
is a return to the opera seria, the early 18th-century genre distinguished by
sometimes static da capo arias that stress heroic emotions over the
music. Therefore Marshall Pynkoski and Jeannette Zingg, OA founders and
co-artistic directors, decided to stage Idomeneo as French
tragÈdie lyrique or opera-ballet in the style of Lully and Rameau
ó or as if it were one the French operas with which Gluck set out to reform
Paris.

Beyond this gloriously successful melding of epochs, in spirit this
production was pure Sturm und Drang, a three-hour angst-ridden
outpouring of passions both noble and destructive that left viewers exhausted
but with sufficient energy to proclaim the production the finest work of this
unusual company thus far. In addition to Brueggergosman ó the staging had
everything it needed to make this story of man caught up in the machinations
of a god great music theater.

Designer Gerard Gauci set the opera behind a scrim that showed a giant
tsunami wave; behind it beefy Canadian bass-baritone Curtis Sullivan, an
angered Neptune, stirred his stormy seas. Idomeneo, the returning hero
trapped into sacrificing his son Idamante, was regal Canadian tenor (amazing
the names one finds among Canadians!) Kresimir Spicer, a tenor with the vocal
weight of a baritone.

As Idamante, American Michael Maniaci made clear why he wishes to be
billed as a male soprano and not as a countertenor, for ó heard on
recording ó one would assume his to be the voice of a female. (In many
productions Idamanate, originally for castrato, is sung by a mezzo.) Ilia,
Priamís daughter taken captive at Troy and now the great love of Idamanate,
was gently and lovingly sung by Peggy Kriha Dye.

OA enjoys a long and happy alliance with Tafelmusik, the top early-music
band in Canada ó if not in the hemisphere ó that serves as pit band for
all company performances. Andrew Parrott, a pioneer in the pre-classical
repertory, came from England to conduct.

Unique to OA is the concern for the role that dance played in early opera,
and choreographer Zingg enriched the production with her long practical and
scholarly experience in the field. For it was not with mere dance
ìnumbersî that she enhanced the theatrical impact of this staging, but in
the manner that she made dance an integral part of the action of the drama. A
total of 16 dancers, some past and present members of Canadaís National
Ballet, were in the ensemble.

Yet the total excellence of this Idomeneo was more than the sum
of its many superb parts. Pynkoski and Zingg understand the interdependence
of music and dance requisite to a spectacle such as this. Early musicians
talk much of ìauthenticity.î At Opera Atelier it is simply ó and
unpretentiously ó assumed.

The Canadian Opera Company took risks with the staging of Eugene
Onegin on stage in its still-new Four Seasons Centre in April. Happily,
the risk paid off, for the production, imported from Strasbourgís OpÈra
national du Rhin, brought a searing edge to the melancholy of the story that
Tchaikovsky drew from Pushkinís verse novel. And although director Enrico
De Feo took no fundamental liberties with the story, he told it in a way that
added depth to it ó especially to the Onegin-Lensky relationship.
Tchaikovsky spoke of his score as a series of ìlyric scenes,î tableaux
more concerned with character study than with advancing the plot. Thus the
usual division into three acts is arbitrary.

It was shrewd of De Feo, following no doubt closely in the footsteps of
Strasbourgës director Marco Arturo Marelli to opt for a single intermission
before the duel, which he brought a new twist to the plot. (Marelli
was responsible also for design and lighting.)

But first the duet, which usually ends Act Two. As the two men raised
their weapons, Lensky threw himself upon Onegin with a passionate embrace. A
shot was heard, and Lensky fell. But how the shot was fired left the capacity
audience in the Four Seasons Centre arguing. Did Lensky ó in an act of
suicide ó pull the trigger on Oneginís weapon or was it all an accident?
The majority opted for an accident, which added to the senselessness of the
duel.

This scene, staged in falling snow, was the climax of the opera, and ó
in a major departure from tradition ó the party in the Greminsí home
followed without interruption. In traditional stagings years that Onegin
spent aimlessly wandering about Europe stand between the duel and this final
scene. Here, however, doors opened immediately after the duel, and guests
dressed in mourning took their positions with slow steps on stage during the
Polonaise. But there was no dance; the exuberant music was became a danse
macabre [italics] that set the stage perfectly for the final confrontation
between Tatiana and Onegin.

Here both characters were torn, frenzied and almost out of control in
their confessions. This made Tatianaís usually composed resolve tenuous,
and Oneginís frustration as he tore his hair near-hysterical. There were
fine touches along the way. Onegin, for example, eyes-dropped on Tatiana as
she wrote her confessional letter. 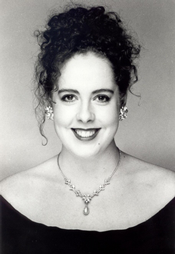 The entire opera played in a box tipped at a Caligari-esque angle; it
served both as in- and out-of-doors, allowing for scene changes without
curtain. Canadaís Brett Polegato was an ideal Onegin ó young,
aristocratic, suave ó with just the right touch of ennui to make him
irresistible to the young and innocent Tatiana of Giselle Allen, a
beautifully youthful and graceful soprano from North Ireland.

She was a perfect balance ó and foil ó for Polegatoís Onegin.
Allyson McHardy was an Olga more serious than most, while Danil Shtoda was an
unfortunately bumptious Lensky. Alexander Kisselev was a moving Gremin.
Conductor Derek Bate drew superb plays from the COC orchestra on April 26.

This was a staging that demonstrated how new dimensions can be brought to
a familiar work without resorting to the extremes of Regietheater.
Back, finally, to that name Brueggergosman. When Measha, born Gosman, married
her high-school sweetheart, Swiss exchange student Markus Bruegger, the two
decided to join their names as well. Putting ìBrueggergosmanî in lights
might be a challenge, but ó metaphorically ó itís already there.