Only 350 patrons can
fit into the Henry Street Settlement Theater at 466 Grand Street, a
circumstance which creates an intimacy between performers and audience that
is unlike any experience you will have uptown. Brenda Pattersonóthe title
character on the May 11 performance of the Chamber Operaís most recent
production Ariadne Unhingedócreated electric moments in this
little theatre.

Ariadne Unhinged is not an opera in the traditional sense of the
word; rather, it is a collage of three pieces, only one of which was actually
drawn from an opera. Claudio Monteverdís Lamento díArianna (from
the now-lost 1608 opera Arianna), Franz Josef Haydnís cantata for
solo voice Arianna a Naxos (1790), and Arnold Schoenbergís
melodrama Pierrot Lunaire (1912) were stitched together into a
genre-busting performance by Neal Goren, Artistic Director of GCO, along with
director and choreographer Karole Armitage of Armitage Gone! Dance. 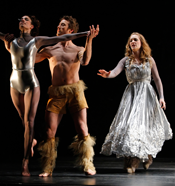 Ariadne Unhinged attempts to delve into the madness of grief that
the mythological Ariadne experiences upon being abandoned by her lover
Theseus right after she has saved his life and guaranteed him his crown. The
palindromic structure of the work nestled the three sections (of seven songs
each) of Pierrot Lunaire between sections of the Monteverdi and the
Haydn.

All the music was well performed and the juxtaposition of dancers and
singer onstage, which can be so awkward if the singer doesnít move well,
was extraordinarily well executed. Vera Lutterís set design, along with
Clifton Taylorís lighting allowed for a number of transformations of the
stage without ever interfering with the action or the continuity of the
work.

With sections Monteverdi serving as ìbookendsî and the middle piece of
the performance, I was inclined to regard these moments of monody as
Ariadneís most lucid moments, while the Schoenberg represented her at her
most mad and delusional. What struck me as detrimental to the endeavor was a
series of less-than-subtle props carted onto the stage for each of the
twenty-one Pierrot songs. The propsóincluding huge cardboard
roses, two-foot long knitting needles, a ìgrotesqueî violin bow and a
fake violin, and a cardboard moon on a stick, among othersóappeared so
predictably for each that I started wondering what the next prop might look
like instead of listening to one of my favorite pieces of music. 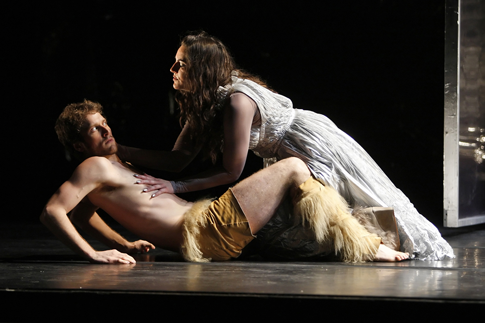 It seems to
me that Schoenbergís music and Albert Giraudís poetry (as translated by
Otto Erich Hartleben) is so vivid and full of meaning that the addition of
wooden props is not only unnecessary, but even injurious to the artwork. In
particular, when the dancers came on stage crouched under wrinkled aluminum
sheets the effect was only the creation of a major distraction due to the
sound of the sheets crinkling and crackling during the entire song. Other
parts of the dance were much more effective and added greatly to the
experience, notably, the lovely duets that were danced while Ms. Patterson
sang the sections of Haydnís cantata.

The GCOís orchestra was another highlight of the eveningóeach
composerís music had a different accompaniment: theorbo for the Monteverdi,
piano for the Haydn, and of course, Schoenbergís Pierrot ensemble for
Pierrot Lunaire. All the instrumental music was impeccable, but the
Pierrot ensemble brought a particularly enjoyable energy to the
performance. 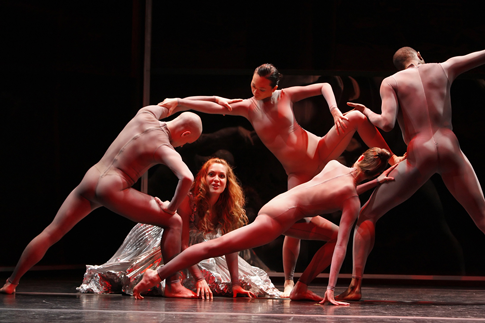 Gorenís little company is doing big things for opera, and I eagerly
await its next production.