Written to his own libretto between 1856 and 1858 when Berliozí
reputation was at its nadir among Franceís musical establishment, the
composer was devastated when the Paris OpÈra, the only theater in Paris then
capable of mounting the work, refused to mount the five act opera. In an
effort to present the work elsewhere, Berlioz divided it into two parts, with
the first two acts of the opera comprising The Capture of Troy
becoming Part 1 and the last three acts comprising The Trojans at
Carthage becoming Part 2.

Although in format written in strict conformity with the requirements of
mid-nineteenth century French grand opera, Berliozí idiom was decades ahead
of its time, and the composer met only very limited success in having the
work staged ó he lived to see only a truncated version of Part 2 performed
in his lifetime. Thereafter, as noted by Hugh Macdonald in the BSOís
program notes, attempts to stage parts of the work were sporadic, and for
nearly one hundred years the opera was universally regarded as more or less
unperformable. So it remained until the fabled revival of Les
Troyens at Covent Garden under Rafael Kubelik in 1957. Since then and
aided with the publication of the critical score, the work has been
recognized for the masterpiece that it is. It is now periodically performed
throughout the world, as one of the Everests among operas, when the demands
of the score can be met.

This was the first time in the BSOís 127 year history that it presented
the complete work. It was also the first time that the orchestra gave two
complete performances on the same day. Every effort was made to meet the
demands set by the composer, with the work presented absolutely complete, the
BSOís normal player contingent increased by 27 players, and meticulous
attention paid to Berliozí requirements for offstage bands.

The success of Part 1, The Capture of Troy, rested upon the
shoulders of mezzo Yvonne Naef as Cassandra and the members of the Tanglewood
Festival Chorus. It was announced before the performance that Naef was
suffering from a serious cold, and when she wasnít singing it was obvious
that she was in physical distress. But none of this was reflected in her
performance. As the daughter of Priam given the gift of prophecy but then
cursed by the god Apollo so that no one will believe her, Naef fully met the
stentorian demands of the role with a beautiful and luxuriously-toned voice
that clearly and without apparent effort time and again soared over the
orchestra and chorus. This is a voice to be reckoned with. 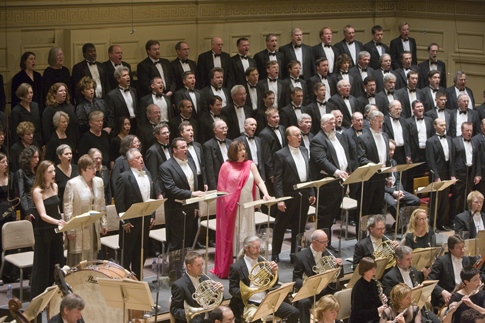 Tanglewood Festival Chorus
and (l to r) Kate Lindsey, Jane Bunnell, Ronald Naldi, Marcello Giordani, Yvonne Naef,
Dwayne Croft, Clayton Brainerd and Julien Robbins.
The Tanglewood Festival Chorus is made up of members who donate their
services. Founding conductor John Oliver cannot be overpraised for his work
in the preparation for these performances. Singing from memory without a
score, the Chorusí opening lines nearly blew the rear wall off of Symphony
Hall, and that was just for a start. This is a large chorus that sang with
clarity as a single voice. As with the orchestra, dynamics, shading, and
suppleness were the watchwords of the day. One often pays lip service to the
chorus as the other star on the operatic stage, but in this instance the
designation was fully deserved.

Central to Part 2 are the roles of Dido, Queen of Carthage, that was sung
by mezzo Anna Sofie von Otter, and Aeneas, hero of Troy and soon-to- be
founder of Rome, that was sung by tenor Marcello Giordani. Von Otter is an
accomplished and well respected singer who has sung the role of Dido
elsewhere to acclaim, but she was overparted by the forces assembled in
Boston. Even the fabled acoustics of Symphony Hall were unable to help. She
was wise enough not to force her voice to meet the demands of the music, but
that decision left her nearly inaudible when the orchestra played forte. This
was frustrating because she was excellent when she could be heard. Von
Otterís performance was like going to a fine French restaurant for dinner.
The food arrived exquisitely prepared and beautifully presented, but many of
the portions on the plate werenít large enough to satisfy.

Marcello Giordani gave an acceptable but not outstanding performance as
Aeneas. While not a particularly long role, it has two major challenges that
are critical to the opera. The first is in Part 1 when Aeneas interrupts the
Trojansí celebration to bring news of the death of the priest Laocoon, an
evil omen requiring that they appease the goddess Athena by bringing the
horse into the city. This scene should have the impact that Verdi later
achieved with Otelloís ìEsultateî and be a show stopper. Giordani
barely slowed it down. In Part 2, ìInutile regretsî is one of the great
dramatic soliloquies in all of opera. Here Aeneas debates with himself as to
whether he should stay with Dido in Carthage or fulfill prophecy and sail to
Italy to found the City of Rome. Giordani lacked the heroic ring that the
scene requires and instead gave us routine. There was little if any evidence
of French style, but even Italian style would have been welcomed if Giordani
had been more involved in the proceedings. It is unfair to compare singers of
today with those of the past. But the problem is, to be completely
successful, the role of Aeneas needs the voice of a Georges Thill or Jon
Vickers singing the part, or at least a tenor who seeks to emulate their type
of voice, involvement, and passion. 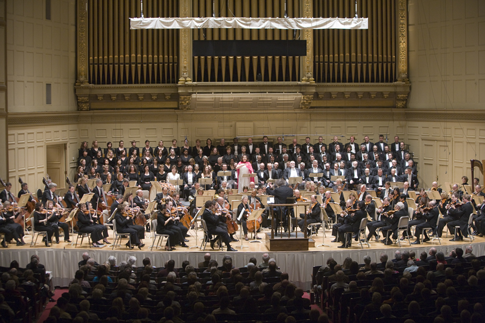 In other roles, baritone Dwane Croft was outstanding in Part 1 as
Cassandraís fiancÈ , Chorebus; and bass Eric Owens sang well as the Ghost
of Hector. In Part 2, mezzo Christin-Marie Hill performed with distinction as
Anna, Didoís sister; and bass Kwangchul Young sung the role of Narbal,
Didoís minister, with deep and dulcet tone. Iopasí Part 2 aria can bring
the house down, and so it did when sung by tenor Eric Cutler who was warmly
applauded for his reverie. The qualities of Cutlerís performance were such
that they made one wonder if he should have instead been singing the role of
Aeneas. Tenor Philippe Castagner showed that, in the right hands, there is no
such thing as a small role in opera. His few lines as Hylas, a young Trojan
sailor longing for home, were exquisitely sung and he received a well
deserved accolade from the audience at the end of the performance.

If you want to give James Levine an impossible task to perform, ask him to
conceal his love of Les Troyens. This was in evidence during every
moment of the performances. So was his knowledge and complete mastery of the
opera. Conducting while seated on a swivel chair, one rarely witnesses such
physical involvement from a conductor, and the orchestra and chorus responded
in kind. Under Levineís direction, every detail in the complex score was
made clear while balance and perspective were maintained throughout. One of
the difficulties when you have a large orchestra is that the sound can get
mushy. Itís one thing to have eight double bass on stage. Itís another to
have them play with millisecond accuracy as one instrument. But this is what
Levine achieved. One must also note that the BSO is not an opera orchestra
accustomed to playing for long stretches at a time. Consequently, the task of
playing not only the ninety minutes of music of Part 1 but also the two hours
and forty minutes of Part 2 on the same day was a daunting one. Not only did
the BSO meet the challenge, every section of the orchestra played to
perfection from start to finish.

This was a performance where the whole was greater than the sum of the
parts. Opera lives because it joins the talents of the past with the talents
of the present. Notwithstanding deficiencies among some of the soloists,
these performances were a rare example where the genius of Hector Berlioz
joined with the genius of James Levine and the individual members of the
Boston Symphony Orchestra as well as the genius of the Tanglewood Festival
Chorus to give us close to a perfect storm of Les Troyens.