Like the nursery rhymes of childhood, Dred
Scott, Harperís Ferry and John Brown are words that resonate only
indistinctly in the minds of todayís elders; an ahistorical younger
generation knows them not at all. Thus the astonishment that prevailed in the
Lyricís aged venue at the contemporary relevance ó indeed, the urgency
ó of the story of the man determined to end slavery in this country ó
even by force, if necessary.

Although decades in the making Mechemís monumental score ó it runs
slightly over three hours, less two intermissions ó comes to the stage as
racism rumbles beneath the surface of a major political campaign. Brown, if
not totally aímouldered, would turn nervously in its grave at the sight of
current events. 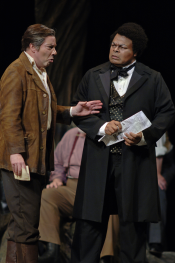 Mechem, author of the Brown libretto as well, has done his
homework in his use of the archives in what is in many ways a documentary
drama. Furthermore, for Mechem Brown is a family matter, for his
historian father once attempted to tailor this story for the opera stage.
Much to his credit, the younger Mechem, born in 1925, has resurrected Brown
in all his ambiguity. At the very center of his opera is the confrontation
between Brown and Frederick Douglass, the eloquent black leader who insisted
upon abolition by legal and peaceful means. Brown, on the other hand, killed
no one, but approved the murder of six men to achieve his goal. Thus
questions of violence and terrorism, ghosts that lingers from the years of
opposition to the Vietnam war, add weight ó and darkness ó to Mechemís
tale.

The Lyric could hardly have done better than casting James Maddalena and
veteran black baritone Donnie Ray Albert as Brown and Douglass. Maddalena, on
stage almost without interruption, makes of Brown a towering and commanding
figure, and although Mechem portrays him positively in sometimes mesmerizing
music, he never evades the complex issues encountered in Brownís position.
Albert makes Douglass, a man to whom ambiguity was alien, a veritable Rock of
Gibraltar in the middle of this story. Indeed, this role must be a major
triumph in Albertís long and distinguished career. 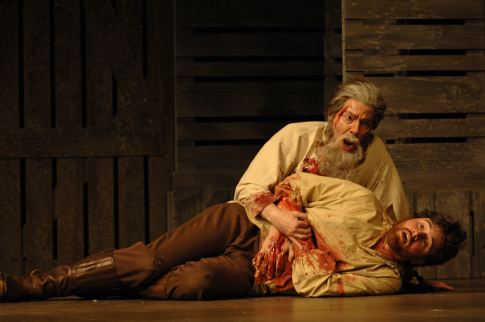 Mechem adds a person dimension to Brownís story with a sub-plot
involving his family and the hesitation of those next to him to support his
plans for the raid on the armory at Harperís Ferry, the attempt to free
slaves that failed and resulted in his arrest and execution. Son Oliver
Brown, movingly sung by tenor Patrick Miller, and daughter-in-law Martha,
sensitively played by soprano Jennifer Aylmer, underscore the human toll
taken by history.

Mechemís lush score abounds in moments of richness, such as the love
duet between Oliver and Martha that opens Act Two, when Vanessa Thomas steps
forth from the wings to read a letter by a young slave’s wife and when Oliver dies
in his father’s arms. The score is often marvelous both in sound and
emotion, yet it is always measured. It is tonal and lyric throughout, but
never trite, and a major strength lies in Mechemís experienced hand as a
choral composer. In many especially moving moments he concludes a crucial
scene with a chorus that never stands by itself, but is always an integral
continuation of what has gone before. The choruses “Iím Free” and
ìStoke the Fireî are as stirring as anything Verdi ever wrote.

Mechem makes no secret of the deep religious convictions that motivate
Brown, who sees himself doing Godís work in fighting slavery. However, he
treats this aspect of his heroís character with reserve, never allowing him
to seem a zealot ó despite many Biblical references and the inclusion of
hymn tunes in his score. There are points in the opera at which Mechem
hauntingly recalls Bachís passions in his portrayal of Brownís agony.
Lyric artistic director Ward Holmquist conducted members of the Kansas City
Symphony to fine effect.

It is clear that John Brown, a commission that
celebrates the Lyricís 50th anniversary, should move on to other stages.
Before it does so, however, revision is needed. The opera now runs over three
hours; and, word from within was that considerable cuts had already been
made.

The first act is totally absorbing in its dramatic force. The final act,
on the other hand, wanders and lacks focus. It could end at a number of
places, and the contribution of the post-scripted Apotheosis to the score is
questionable. One knows by then what Brownís fate is to be, and to have him
swing visibly above the stage on the hangmanís rope is ó well ó
overkill and even raises questions of taste. 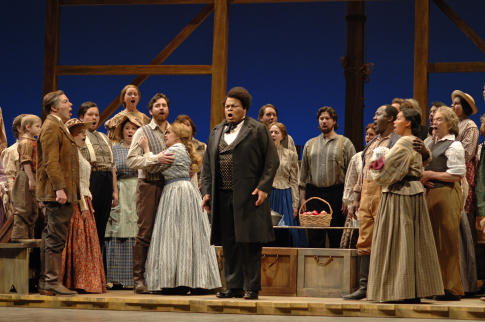 The Lyric, set to move into a new performing arts center next year, has
outdone itself in staging John Brown in its current outdated home.
Book ó and flag-burning ó to mention only two special effects ó are
staged credibly. One does not often seek a message in opera, but there is one
here and it is of particular urgency today. ìOne of the uncomfortable
truths this opera asks us to confront,î writes director Kristine McIntyre
in comments in the program, ìis that most people, even when confronted with
a great wrong, are simply afraid to stand up and be counted. We donít want
to be stirred out of our complacency and we arenít ready to have our
preconceptions challenged.î