Having run into a local friend unexpectedly at intermission,
and having related the above information, he hurriedly said, ìohhhhhhh, you
should come back sometime for a real opera.î

Judging from intermission comments recently in Toronto, and some empty
seats for part two, the piece apparently remains caviar for the gourmand,
rather than bread and butter for the masses. I am hard pressed to quite
understand why, especially when the work is treated to such a world class
performance as mounted here by Canadian Opera Company.

Dany Lyneís gorgeous design ó ethereal, timeless and haunting ó
provided the perfect backdrop and playing environment for Debussyís
masterpiece. While the basic construction featured a girdered bridge which
elevated actors about ten feet off the stage floor, visual variety was
introduced through the addition of well-chosen set pieces (throne, bed,
rickshaw, etc.), and the revelation of fold out features such as a hidden
stairway and door leading from above to the ìdepthsî of the debris-strewn
floor in which ìPelleasî dwelt during much of the first act.

The stage left third of the structure was able to be raised and lowered,
creating ìMelisandeísî bedroom tower, a beautiful evocation of a depth
to the well, and a final descent to the grave for our heroineís remains,
even while her spirit (in the form of a diaphanous bed canopy) ascended to
the heavens.

Scrims, opaque spun fiberglass drops, and a cyclorama fronted by
expressive filigreed tree branches, were inventively lit by Thomas C. Hase
with his perfectly judged special effects and a highly creative design. He
was assisted by John Prautschy. A glowing blue moon, passing torchlight,
silhouette imagery, the up-lit fountain, and the down lit bed and stairs were
among the superbly calculated effects. A passionate orb of a sun called to
mind Stephen Craneís ìthe red sun was pasted in the sky like a
wafer.î

Ms. Lyneís vibrant Asian-influenced costumes could also hardly have been
bettered, and the choice to put ìMelisandeî in vivid reds proved to be
inspired, completely playing against the usual wispy ìtypeî for this
mysterious character. Indeed, our heroineís first appearance behind a
scrim, in a rich Chinese red dress with an impossibly long train, and draped
in an over-sized off-white veil was a triumph of character statement, making
her at once irresistibly alluring and impossibly indefinite. The minute
attention to each and every technical detail created true theatrical
magic. 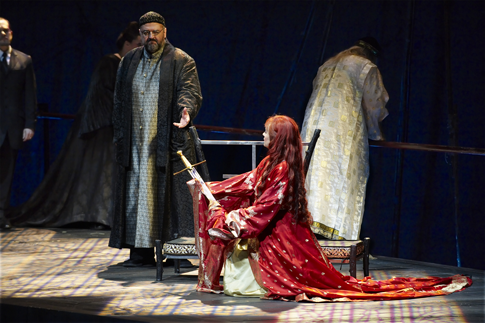 Such a top notch design would go for nothing, of course, without a cast up
to the musical challenges, and COC came up with winners all around. At any
given period there is always a dream team for the title roles, and on the
basis of this visit, I would have to say the mantle has been passed to stars
Russell Braun and Isabel Bayrakdarian, Canadians both. Although Mr. Braun has
more experience with his well-known ìPelleasî (including a memorable
Robert Wilson version in Salzburg with Dawn Upshaw), there is nothing in
these fearsomely demanding roles that eludes either one of these superb
interpreters.

Ms. Bayrakdarian offered a most compelling take on ìMelisandeî with a
bit more starch than some. She displayed a wonderful technique, an even
production, fine projection with a pleasing point to the tone, and thorough
attention to each quicksilver shift of mood and subtext. Mr. Braun now pretty
much owns his role, and he negotiates ìPelleasíì highest reaches with
seasoned perfection, singing with a robust and responsive baritone that has
mastered every nuance of his tortured attraction to his brotherís wife.

Pavlo Hunkaís compelling ìGolaudî was every inch the powerful
linchpin central to the drama, as it needs to be. He managed more variety
than other interpreters that I have seen, and his obsession with finding
confirmation of the betraying physical act was well-balanced between
heartsick introspection and macho bluster. 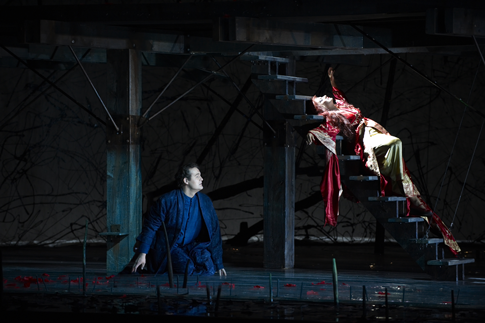 Richard Wiegold used his dark imposing bass to etch an unusually detailed
portrait of ìArkel,î and he was well rewarded at curtain call for his
efforts. Barbara Dever offered dramatic power and a steady outpouring of her
rich mezzo for a fine assumption of ìGenevieve.î The small role of the
ìPhysicianî was fleshed out with wonderful stage business, and the few
rolling phrases required were well intoned by Alain Coulombe.î Only Erin
Fisherís attractive if light-voiced ìYnioldî seemed one size too small
to ride the occasional dense orchestrations.

Director Nicholas Muni made masterful use of every playing space and level
available to him; he created memorable, chills-inducing stage pictures and
groupings through well-motivated blocking; and he could give a masters class
on effective character development and interaction. My God, here is a
director who not only understands the work, but serves it! Letís hope his
creative philosophy starts an epidemic in the opera world. For this is
decidedly a brilliant mounting of Debussyís ìPelleas,î rather than
Muniís. Would that all directors ìgotî that difference.

The superb playing from the pit was diligently led by Jan Latham-Koenig.
The acoustic of the house seemed very grateful to this impressionist work,
even if I did think that it favored the orchestra slightly more than the
singers. This richly detailed reading not only had the wispy, blurry
succession of solo lines flawlessly interwoven, but the blocks of woodwinds,
strings, and horns were individually and collectively well-knit into a clean
ensemble. The passionate outbursts were all the more effective for the placid
churnings that came before, and the inner life and forward thrust of the
rhythmic pulse was never lost.

The beautiful ìnewî house in the Four Seasons Center would be an
architectural pride of any world city, and it is perfectly complemented on
stage by a stunning ìPelleas et Melisandeî that makes the best possible
case for this elusive work. Will this opus ever become a bread-and-butter
opera? Perhaps not.

But for those of us who occasionally relish the highest quality caviar on
our musical menu, this totally winning production was a very rich feast.