However that is exactly what John Copley’s straightforward,
pretty and — heaven forfend! – traditional staging of ‘The Merry Widow’ has
to offer. Set around the time of the opera’s composition, the production has
chocolate-box frocks, dashing uniformed officers, a full-blown ‘Pontevedro in
Paris’ at Hanna’s home (complete with folk-dancers) and orange-flounced
can-can girls at Maxim’s.

In the title role, Amanda Roocroft at first seemed rather matronly and ill
at ease — perhaps her first-act costume was partly to blame — but came
into her own from the second act onwards when she brought out Hanna’s wit,
warmth and down-to-earth charm. Vocally there was a touch of strain in her
top notes, and she was happier in the middle register, floating a beautiful
Vilja-Lied.

Philip O’Brien, the second-cast Danilo, was making his company dÈbut at
this performance, and like Roocroft he took a while to make something of his
character. He grew in presence throughout the performance, and by the time he
made his exit to Maxim’s at the end of Act 2 his charisma was sufficient to
hold the audience’s sympathy.

When they finally got together, unfortunately, it lacked both credibility
and passion – the connection between them was simply inadequate. Fortunately,
Alfie Boe’s Camille was full of youthful ardour towards Fiona Murphy’s
beautiful, vivacious Valencienne; these two were really the production’s life
force, as engaging to watch as to hear.

Jeremy Sams’s clever (and sometimes very risquÈ) translation did not
always come across clearly in the sung numbers. It was put to best effect in
the spoken dialogue and the comic numbers, providing ample material for
Richard Suart’s Baron Zeta and (especially) Roy Hudd’s endearing Njegus. Both
are mainly speaking roles, though the biggest hit of the evening was Hudd’s
showpiece number in Act 3. Daniel Hoadley (St Brioche) and Hal Cazalet
(Cascada) provided an almost slapstick angle to the coomedy, sporting
ludicrous ìFrenchî accents.

Oliver von Dohnanyi’s conducting seemed to revel in the rumbustious
numbers but was almost leaden in the quicker, lighter passages, ill-serving
the energetic choreography by Anthony Van Laast and Nichola Treherne. 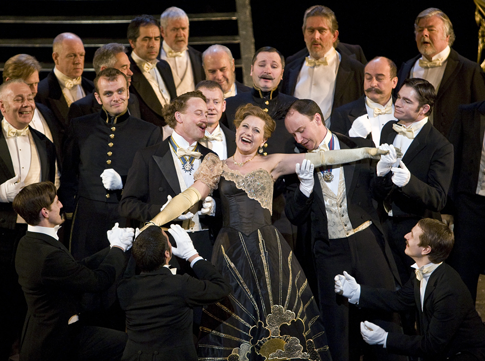 Though it had its flaws, this was a highly entertaining evening, and the
audience emerged from the theatre with a spring in its step. It was just a
shame the house was not fuller: as classic operetta tends to pull in a
substantially different audience from most of ENO’s fare, it is perhaps an
audience that isn’t used to paying ENO’s ticket prices, once on a par with
other West End shows but nowadays substantially higher.

As I had wanted very much to hear John Graham-Hall as Danilo, and had not
been aware when booking that he was not due to appear on May 6th, I decided
to return a few nights later in order to hear him. Although the role lies
rather low for him, it surprisingly seems to fit him like a glove in other
respects. Who would have thought this tall, pale-faced tenor — normally at
home in ‘character’ roles — could be so rakishly attractive as the awkward
playboy? And his chemistry with Roocroft was really touching. 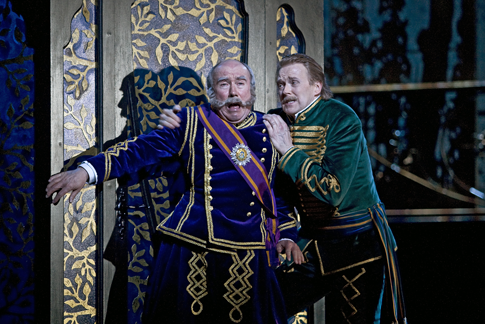