ENO has one particular coup up its sleeve. There can be few singers as
well-suited to the grotesque, tragic-comic figure of Mr Punch as the baritone
Andrew Shore, one of ENO’s most distinguished regular guests and a
first-rate singing actor. In full puppet costume, he is the cross between a
naughty child, a vicious murderous thug and a sinister nightmare figure
— a nightmare which eventually implodes on him with the full force of
half-a-dozen Punch clones and the ghosts of his victims.

Giles Cadle’s set and costume designs go all-out to replicate the iconic
‘Punch and Judy show’ look, in primary colours that look slightly shabby and
sun-bleached. The stage is a circus-ring with a canopy of brightly-coloured
fairy lights. But at the back, a freshly-dug grave is a reminder of the
macabre inevitability with which Punch’s serial murders will be carried
out.

Ashley Holland strikes an imposing figure as the Choregos, a Greek
chorus-like figure who acts as a master of ceremonies, a narrator and moral
judge, but who falls victim to Punch just like all the others. It is the
Choregos and his murder that first blur the distinction between make-believe
and reality, an idea which Daniel Kramer’s staging takes further by stripping
away the puppet-costumes from the protagonists as events progress and the
moral themes of the piece are developed. Most — including the Doctor
and Lawyer, played by Graeme Broadbent and Graham Clark respectively —
reach this state of human nakedness at the point at which Punch kills them.
As for Punch himself, by the time he comes to feel remorse for the murder of
his baby — the first of his crimes — he is no more than a bald,
half-dressed, vulnerable human being. Only Gillian Keith’s ringletted,
hyperactive doll of a Pretty Polly remains in ‘character’, a fantasy figure
to the last.

Birtwistle’s brutally uncompromising score — which supposedly upset
Benjamin Britten so much at the work’s premiere that he walked out of the
performance — is usually subtle and understated, atonal but far from
tuneless. It juxtaposes banal nursery-ditties with ‘Passion chorales’ and
tragic monologue. The insouciance of the little motif with which Punch shrugs
off each murder strikes a vivid contrast with the murdered Judy’s plea for
Punch’s reform, sung by the versatile American mezzo Lucy Schaufer.

Credit is due to the cast for managing to get the majority of Steven
Pruslin’s wordplay-filled libretto across, and to conductor Leo Hussain
(sharing the opera’s five-night run with ENO’s Music Director, Edward
Gardner) for maintaining such dramatic coherence in the music. 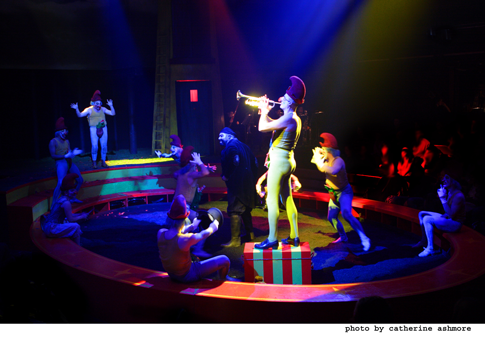 A scene from Punch and Judy