Then the
score retreats to libraries, waiting to be listed in the next edition of the
Grove Dictionary of Opera.

Recent successes such as Mark Adamoís ìLittle Womenî and ìDead Man
Walkingî by Jake Heggie are happy exceptions. Thus itís good news that
Anthony Davisí ìAmistad,î premiered by the Chicago Lyric Opera late in
1997, is being revived by Spoleto USA, the Charleston, South Carolina,
all-arts festival that has a special ìfeelî for unusual works. Now itís
being revived in a greatly revised version by the composer to re-open
Charlestonís Memminger Auditorium, the cityís former arts venue that had
fallen upon hard times until that Spoleto ìfeelî sensed its value as a
unique performance space.

A gala performance of ìAmistadî opens the 2008 Spoleto season and
inaugurates the rebuilt hall. When Davis accepted Chicagoís commission to
write ìAmistad,î the mutiny of heroic Africans about to be sold into
slavery was a story whose time had come. Steven Spielbergís film version
also appeared in 1997, and it led ó in turn ó to David Pesciës novel on
the mutiny and the court case that was a first step toward the abolition of
slavery in this country.

Yet in the original version of the opera Davis seemed ó so to speak ó
to have missed the boat. Critics were not kind to the work. Davis and his
librettist cousin Thulani Davis, some felt, had ìleachedî a great story
of its energy. The Trickster God, an African folk deity, did too much of the
talking, allowing one-dimensional characters little opportunity for
meaningful exchange. The opera was too long; it was static and did not excite
the audience. The Amistad case ó the Spanish owners of the ship tried to
claim the Africans as their property ó had gone all the way to the Supreme
Court. Yet, one observer wrote, the scene that focused on John Quincy Adams’s
courtroom defense of the captives was ìa snore.î

Nonetheless Spoleto general director Nigel Redden saw ìAmistadî as a
work of particular relevance for Charleston and decided to bring it back to
life in a theatrically and musically vital way. It would be ideal, he felt,
for the inauguration of the re-built Memminger. ìI was at the Chicago
premiere,î Redden says, ìand I thought of ìAmistadî immediately when
we started making plans for Memminger. ìItís important to me that people
feel this is a theater for everyone, and I wanted a work that would attract a
wide spectrum from the community.î

Although only minutes away from King Street, the Charlestonís major
downtown shopping artery, Memminger stands in the middle of a very mixed
neighborhood off the regular path of festival visitors. The cityís
once-active and well preserved slave market is a horror of history close at
hand. ì ëAmistadí was an obvious choice for Memminger,î Redden says.
ìItís a work that belongs here.î Redden sat down with Davis, who gained
early fame for his ìMalcolm X,î and made suggestions for the revision of
the opera.

ìItís a work that relates to a major issue in Charlestonís
history,î says Spoleto director of opera and concerts Emmanuel Villaume,
ìand staging it in Memminger underscores the impact that Spoleto has ó
and has had ó on the city.î Villaume will be on the podium for all six
performances of ìAmistad.î And Villaume is pleased that the opera is open
minded and without a narrowly defined political position.

ìAnthony had been hoping for a chance to return ëAmistadí to the
stage,î he says. ìHe has put a lot of effort into the new version,
shortening the work and making it more concentrated. ìItís now for
smaller forces used more efficiently, and itís far more intimate than it
was in Chicago.î ìëAmistadí will gain from the location and the
legacy of Charleston,î Davis says. ìItís now shorter and tighter, and
there will be a better balance between singers and orchestra.î

A totally new cast has been recruited for the Memminger production, which
will be directed by Sam Helfrich with costumes by Kaye Voyce and an
imaginative set by Caleb Wertenbaker. Leading the list of 21 singers are
Gregg Baker, Stephen Morscheck, Mary Elizabeth Williams and Michael
Forest.

Redden points out that 2008 is of particular significance for
ìAmistad,ì for it marks the bicentennial of the abolition of the
transatlantic slave trade. ìThis brings a particular resonance to the
Spoleto production,î he says. Spoleto has planned numerous events related
to the opera, including artist talks and roundtables at the Avery Research
Center for African American History and Culture, guided tours of the
newly-renovated Old Slave Mart Museum, followed by a walking tour of sites
related to African-American history in Charleston and screenings of related
films. The Freedom Schooner Amistad ñ a replica of the slave ship currently
on an 18-month transatlantic voyage ñ will be docked at the Charleston
Maritime Center from May 16 through the opening weekend of the season.

It is, however, not only Amistad that is getting a second chance at
Spoleto this season. Memminger Auditorium, once Charlestonís major arts
venue, has undergone a $6-million renovation, and will reopen on May 22 with
a gala performance of ìAmistad.î Designed by the Charleston architect
Albert Simons, Memminger was completed in 1939 as a Federal Works Agency. It
was home to the Charleston Symphony Orchestra prior to the opening of
Gaillard Auditorium in 1968. It was also the site of high-school basketball
games. Neglected after Gaillard was built, Memminger lost its roof in
Hurricane Hugo in 1989. Emergency repairs saved the structure, which was
filled with pigeons and cobwebs when Nigel Redden envisioned the ruin as the
site for Spoleto extravaganzas. With makeshift air conditioning and miles of
duct tape to save the audienceí clothes from splintered seats, Memminger
reopened with a performance of Heiner Goebbelsí massive ìSurrogate
Citiesî in 2000. Mahler symphonies and Chinaís ìPeony Pavilionî ó
complete with a moat for live ducks ó followed. The 2004 staging of
Mozartís ìDon Giovanniî was so successful that it was repeated in 2005.
It also prompted the decision to rebuild Memminger as a black-box theater.
ìMemminger has an edge to it,î Redden says. ìFrankly, itís fabulous.
It makes a very strong statement.î 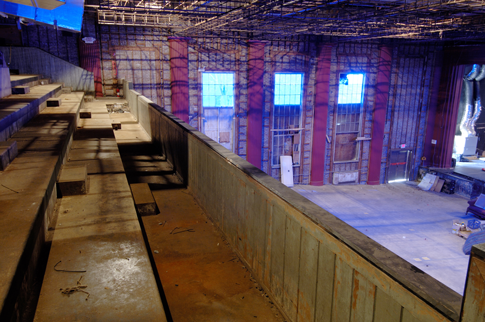 The balcony of Memminger Auditorium prior to renovations.

This season Memminger will also be home to Spoletoís twice-daily
chamber-music recitals, the most popular events of the festival, while the
historic Dock Street Theatre is remodeled. Memminger is now handicap
accessible and it has an attractive lobby with upgraded restrooms. The stage
now has wings, and a garden will welcome audience members during
intermissions.

The second opera of the 2008 Spoleto season is Rossiniís ìLa
Cenerentola,î which opens in Gaillard Auditorium on May 23. Charles
Roubaud, whose Spoleto credits include a shimmering ìLakmÈî and a
rollicking ìAriadne auf Naxos,î directs; Matteo Beltrami is the
conductor. Sandra Piques Eddy sings the title role; others in the cast are
Victor Ryan Robertson, Tim Nolen and Bruno Taddia.