And it did so
with a completely different take on the piece than that devised by Peter
Sellars for Viennaís world premiere in November 2006 at the Festival of New
Crowned Hope.

The original concept had the large orchestra on stage, with minimal stage
action relegated to small elevated playing spaces, more semi-staged oratorio
than a full-fledged dramatic rendering. It is perhaps no accident that this
Chicago company has ìtheaterî prominently included in its name, for they
have put the band back in the pit, and with consummate stagecraft, they
fleshed out this folk taleís libretto which was crafted by Sellars and the
composer based on a story translated by A.K. Ramanujan from the Kannada
language of southern India. 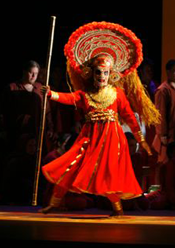 The king (James Johnson, dancer).
The tale concerns two sisters, one of whom, ìKumudha,î is able to
transform herself into ìA Flowering Treeî and back again. However, her
jealous siblingís wicked friends break the spell, trapping the heroine in
her tree-state, breaking her limbs, and leaving her in the gutter as a
pitiful grub-like torso. After her disappearance, the ìPrince,î having
already wedded her for her bewitching beauty and powers, wanders
disconsolately until his love restores her and reunites them in marital
bliss. The only other singing principal is a ìStoryteller.î

The minimalist set and costume design by George Souglides scored big, with
simple yet highly imaginative effects. The first important transformation
scene was accomplished with ìKumudhaísî sister (dancer Karla Victum)
stretching hidden, over-long sleeves from her costume and extending and
twisting the ìbranchesî into various shapes. Each subsequent
transfiguration was larger then the previous, magically accomplished with
colored ropes.

Whether descending from the flies or rising from the stage floor, these
were presented in artfully tied designs that would be the envy of any
advanced macrame class. Indeed, the curtain rise of Act Two stunningly
coincided with a ìgrowing treeî emanating from ìKumudhaî down center
stage that ultimately filled the entire proscenium opening. The few set
pieces and props (a veil-covered over-sized wedding bed, a gilt throne,
primitive masks on poles) were selected with attentive care. 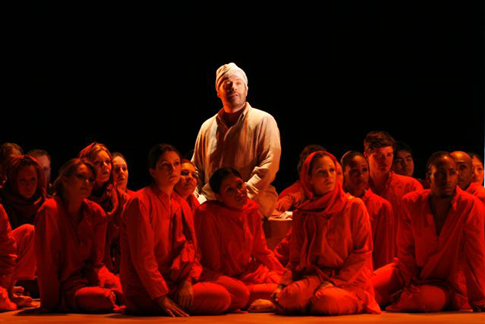 The Storyteller (Sanford Sylvan).
The evocative and colorful costume design was effectively based on
traditional Indian and Asian street and stage garb, with a couple of the
specialty dance turns being dazzlingly outfitted. I wish that same attention
had been lavished on our heroine, who looked quite plain; well, too plain by
comparison. Indeed, the rather lumpy and shapeless white coat she wore in the
wedding scene was promisingly removed to reveal only more of the same look,
if better fitted. All of this was well-served by Aaron Blackís terrific
lighting, artfully combining lustrous washes of color with well-calculated
and flawlessly executed specials, gobos, and area lighting.

If all this was gorgeous to behold, it would not have impacted us as
strongly as it did without Nicola Raabís masterful direction. First,
without ever unduly cluttering the stage, Ms. Raab has devised meaningful and
poetic movement for the large chorus and corps de ballet. As we entered the
theatre, the white-garbed ìStorytellerî was already seated, immobile on a
chair stage right. Slowly, the chorus in reddish-orange filed on from various
points and seated themselves on the stage around him, ultimately creating a
visual ìislandî that captivates us before a note is played. We couldnít
wait to hear what he has to say.

Similarly, meaningful character relationships are defined with ethereal
subtlety. The mating scene with our newlyweds walking/stalking on the bridal
bed was a study in sensuous restraint, as the pair never quite touched but
conveyed the impression of love-making nonetheless by tracing the head and
torso with slow sweeping gestures, and intertwining their arms (well, almost)
in ever inventive combinations.

Perhaps the most problematic scene of all, the dismemberment of the
tree-trapped ìKumudhaî was beautifully solved by having two dancers wrap
her in a cocoon of a vibrant red cloth. Leaving one arm free, the actress
could recline, sit up, and drag herself around the stage as a sympathetic
outcast.

The ritualistic choreography by Renato Zanello was well-executed by not
only his trained dancers, but also pleasingly performed by the singing
chorus. The clean, thrilling choral work (most of them are in the COT Young
Artists Program) was complemented by the groupís exceptional ability to
transform themselves at will from commentators, to bystanders, to relatives,
to royal subjects, all the while doing some amazing staged business, not the
least of which was crawling from the wings on their bellies to pick up folded
boards that were used in any number of combinations to create everything from
a village of houses to a penultimate pop-up back-drop for the loversí
reunion.

COT assembled a fine trio of singers as its principals. Natasha Jouhl
proved an affecting ìKumudha,î singing with a well-schooled, ample lyric
soprano that easily encompassed all the wide ranging demands and soaring
lines of this difficult role. Originally written with Dawn Upshaw in mind,
the part was taken over in Vienna (and several other locations) by rising
star Jessica Rivera (who recently triumphed locally in another Adams piece,
Chicago Lyricís ìDr. Atomicî). Dawn and Jessica are two artists who
really ìgetî this music and donít just sing it, but embody it. That
said, although she vocalized it splendidly, looked attractive, and acted with
commitment, I did not yet feel that Ms. Jouhl has fully integrated the piece
into her voice, or more particularly, her artistry. I would love to see her
again after she has the experience of some more performances.

With Noah Stewartís ìPrinceî I felt that we were experiencing an
artist on the verge of a major career. He brought a regal bearing to the
portrayal, and a polished, weighty lyric voice with excellent thrust on the
high phrases, and wonderful presence throughout the range. Excellent diction,
handsome good looks, beautiful instrument, wonderful musical instincts, sound
technique, stage savvy ó heís got the goods.

I have long admired the fine artist Sanford Sylvan, but I found that his
soft-grained approach was initially a little too lieder-based and subtle for
the task at hand as the ìStoryteller.î Seated a third of the way upstage
for the first act, while I could hear his beautiful sounds and sensitive
phrasing, I too often had real trouble understanding the text and found my
gaze drifting to the surtitles. When he came forward to the side of the
proscenium in Act Two, there was an immediate difference. This would be a
quick fix by just telling him to ìSing out, Louiseî when he is upstage.
Still, he is a treasureable baritone and was an audience favorite. 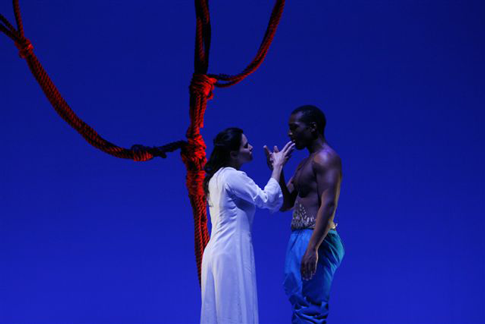 Kumudha (Natasha Jouhl) and the Prince (Noah Stewart).
Diminutive Joana Carneiro had taken over conducting duties from Mr. Adams
and this was a tour-de-force assumption. ìTreeî is a monster-piece that
calls for split second rhythmic changes, quicksilver mood-altering shifts,
lyrical outpouring, percussive tirades, and well, the kitchen sink just may
have been in there somewhere. Above all, this stuff must be clean-clean-clean
to make its hypnotic effect and save a few squishy moments in the opening
barsí undulating strings, Ms. Carneiro was in full command of her forces.
As if she was driving a car at 120 miles an hour, there was no room for
error. And she negotiated every twist and turn of this challenging piece with
concentrated inspiration. Brava Maestra!

It seems as though Mr. Adams may have developed the score a bit since
Vienna, where I remember thinking that perhaps the heroine should have a set
piece up front to announce her character. It seems that ìKumudhaî had
more exposition to sing at COT. Or maybe the staging was just that much more
compelling. For all its glories, and they are many and they are ravishing, I
still found myself wishing that the long chanted choral dance in Act Two
(sort of Rap-Lite) was a bit shorter. And I sorta wanted a radiant final duet
for the reunited lovers. Have I seen ìTurandotî too many times?
Perhaps.

Still, this was in toto a welcome and notable achievement. Chicago is a
world class musical city and with Chicago Opera Theater’s ìA Flowering
Treeî we have been treated to a sampling of the very best the town has to
offer.